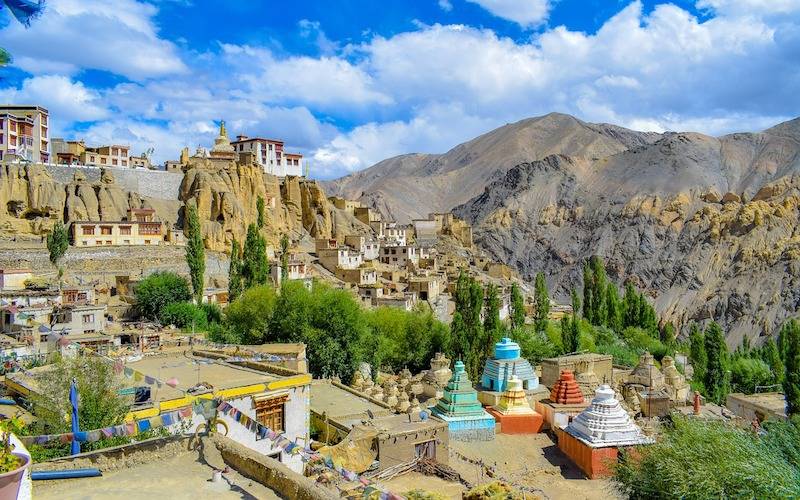 Located in the Northernmost part of India (Jammu and Kashmir) and bordering with China, Ladakh is the perfect spot for two main things – landscapes and monasteries (called gompa in Ladakh). It’s an ex-Buddhist Kingdom that is home to picturesque Tibetan monasteries set in Himalayan backdrops. Contrary to media hype, it’s generally safe to travel to Ladakh.

How to get to Ladakh

The best way to get there is by plane flying into Kushok Bakula Rimpochee Airport located in Leh. You can take an internal flight from Delhi and it takes around an hour and a half. The road trip from Delhi is long – approximately 24 hours straight with many roads inaccessible (it’s only really possible by road between June and September), so is not really advisable as flights are cheap (often less than $50!)

When to go to Ladakh

Mid May to July is the best time to go to Ladakh, because the snow has melted (this starts in April) and the weather is milder. Roads are easier to travel and beautiful landscapes are revealed. Temperatures in tourist season are generally around 16 degrees.

In high season, there can be a lot of tourists in Ladakh, and so visit the main monasteries in the late afternoon or early evening to avoid the crowds.

Built during the rule of the King Singge Namgyal, Hemis is one of the largest and most popular monasteries in Ladakh. It is also one of the richest Buddhist monasteries in Tibet and Leh and shares its origin with an Indian Buddhist who attained enlightenment here named Naropa. A huge attraction of Hemis Monastery is the 12m long Thanka- which is largest in Ladakh and the Hemis Festival (celebrated during June-July). The festival is best known for masked dance performances, dedicated to Lord Padmasambhava.

Thiksey is one of the beautiful Buddhist monasteries in Ladakh, resembling the Potala Palace in Lhasa, Tibet. At an altitude of over 11,000 feet, it is looked after by the people of Gelugpa sect. It comprises a 12-storey building complex and houses more than 500 monks. Thiksey monastery has a precious and large collection of Buddhist journals, books, statues, scripts, Thangka paintings and swords. It also has a 49 ft statue of Maitreya Buddha which is the largest in entire Ladakh.

There are a massive amount Ladakh monasteries to stopover at and this is one of the best. Situated in the beautiful Nubra Valley, Diskit is up there as one of the most picturesque and oldest Buddhist monasteries in Ladakh, as it was founded in the 14th century by Changzem Tsera Zangpo. It belongs to the Gelugpa sect of Tibetan Buddhism and possesses multiple Buddha statues, pictures of guardian Gods, and a massive drum. Due to the spectacular setting, this one of the well-known monasteries in Ladakh and it offers inner peace and solemn serenity.  The Festival of Scapegoat is held here, along with the Jampa Buddha statue.

Likir Monastery, popular as Likir Gompa was founded by Lama Duwang Chosje in the 14th century. It is situated 53 km west of Leh in the Indus Valley in Likir village. Buddhist mythology states that this is the first construction made by Tibetan monks and the museum found inside the monastery showcases a large array of Tibetan relics and artefacts. The Likir Dosmoche Festival takes place on the 12th month of Tibetan Calendar, along with the preaching of Pratimoksha disciplines.

Spituk Monastery was founded by Od-Ide in the 11th century. Today it is home to a hundred monks. Spituk has three-chapels namely Stok, Sankar and Saboo and consists of ancient memorials, idols, frescoes, statues and religious scriptures. 11 km from the main town of Leh and 3.4 km from Leh Airport, it is located in Spituk village. A temple dedicated to Vajrabhairava Deity is in this Monastery, which accessible to visitors only during Gustor Festival and sacred idol of Amitayus.

Locally known as Tiger’s Nose, Stakna is a serene yet small monastery, established during the reign of King Jamyang Namgyal in the 16th century. Found perched on a hill on the left bank of Indus River, the monastery in has jaw-dropping and astounding views of the valley. By the banks of Indus River, 25 km from Leh, Stakna can be visited by boarding a local bus.

It is a Buddhist monastery which houses idols, Buddhist scriptures and numerous paintings and has many equivalent monasteries like in Stakrimo, Sani and Zanskar-Bardan. In the monastery, there is the Statue of Arya Avaloketesvara, Dukhang Assembly Hall with paintings of Sakyamuni, Tsephakmad, and Amchi, silver gilded chorten with Buddha picture and paintings of Bodhisattva, Tshong-san-Gompa, and Padma Sambhava.

Alchi Choskor Monastery is a branch of Likir raised by Lotsawa Rinchen Zangpo. It is one of the most reputed and biggest monasteries of Ladakh. Its complex comprises of three sections- Dukhang, Sum-tsek, and the temple of Manjushri. Unlike others, Alchi is located on a plain land and boasts of ancient sculptures, books, paintings, and figurines. To reach this age-old monastery, travel towards the banks of Indus River off Srinagar road for 70 km. Key attractions consist of Sum-tsek- three-story temple, four-armed huge Bodhisattva statue, white Avalokiteshvara statue, an idol of Maitreya Buddha, and Jampe Lhakhang Temple.

Phyang Gompa belongs to the red hat sect of Buddhism and is perhaps the most impressive monastery in Leh Ladakh. As it is found on a hilltop, it provides incredible views of the surrounding. This white coloured structure is a must-visit monastery in Ladakh and is an major hub of teachings of Digung. At Phyang Gompa, the wall paintings portray Buddhist heritage and culture. There is a 900-year old museum depicting thangkas, different idols, Mongolian, Tibetan and Chinese weaponry and guns, Gang-Sngon Tsedup Festival, and the Sacred Dance Festivals.

Found in Ladakh’s Sakti Village, this is the only monastery of the tradition of Nyingmapa. It houses close to 55 lamas and it is one of the most famous monasteries in Ladakh. It retains an astounding architectural style with central courtyard, rocky roofs and walls, assembly hall, murals, beautiful frescos and the holy throne of Dalai Lama. The 108 volumes of Kandshur teachings of Buddha are preserved here. Key attractions of Takthok Monastery is the meditation cave of Padmasambhava and Statues of Future Buddha, Dorje and Takposal.

The reasons why you should visit this monastery are plenty. The monastery presently houses the biggest statue of Buddha made of gold, around the height of three floors of a building. There is also a wax bowl in front of the statue that is lit for a year before it is swapped with the new one. The beautiful murals and paintings adorn the walls of the monastery. And, remember the Rancho School that became famous after the movie 3 idiots? Well, it is near the monastery. The best attractions of Shey Monastery include the large golden Buddha statue, Rancho School, Buddhas carved out of rock.

What to Pack for Ladakh

Do cover up or dress conservatively when visiting Ladakh Monasteries. Long sleeved T-shirts are better than vest tops and cotton walking trousers are better than shorts – the weather in Ladakh will not be that warm anyway (around 16 degrees).

Pack a sarong like scarf which can be used for many purposes including covering up for monasteries and shielding your head from the sun in India.

Essential items for visiting the Ladakh Monasteries include decent walking boots (make sure that they fit properly and break them in before your trip) and a good quality water/windproof jacket.

Lip Balm should be packed as lips can get chapped on mountain treks. Packing biking gloves if you intend do do any biking – Ladakh is a popular region for this.