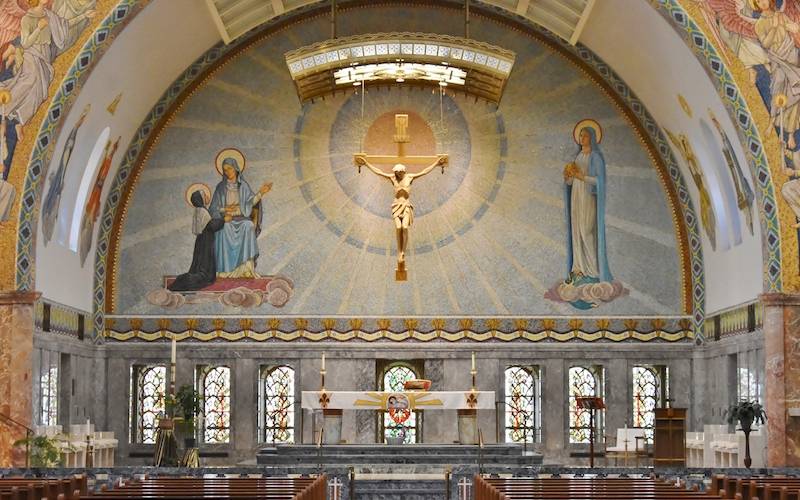 *John Tuttle, from ‘Of Intellect and Interest‘ is here today to introduce us to the beautiful Eizabeth Ann Seton Shrine. Words and photography are subject to copyright and remain property of John Tuttle.

The Seton center includes a museum that contains numerous artefacts from Mother Seton’s daily life (relics), artistic representations, recreations, and more. One of the most impressive items is an expansive canvas covered with a brilliantly executed image of Mother Seton. The paintings frame extends to a terrific length and is so expansive that it has an entire wall designated solely to its admiration.

Accredited to artist Giuseppe Ciotti, the enormous work was hung as the canonization banner at the entrance to St. Peter’s Basilica in 1975, over a century and a half after Elizabeth Seton’s passing. It was on that occasion that Pope Paul VI declared Mother Seton a saint. This was a historic event, a bit more so that other canonizations, because St. Elizabeth Ann Seton had the singular honor of being the very first American to be declared a saint. Her significance is also rooted in the fact that she was the foundress of the Sisters of Charity of St. Joseph’s, hailed to be the inaugural women’s religious community of the United States.

Nearing the end of the tour of the museum, there are a few exhibits which feature tidbits of information that are not immediately concerned with Mother Seton herself. One of these is the “Civil War Sisters” which displays some of the troubling times of the American Civil War and some of the involvement of the Sisters of Charity in caring for injured soldiers. One of the stories related in this exhibit is of particular interest: that of a sister’s caring for William Seton III. Being injured in the Battle of Antietam at Sharpsburg, Maryland, William Seton III was taken to the Saint Joseph Military Hospital and there was cared for by Sister Mary Ulrica O’Reilly, S.C. In speaking with her patient, the nun eventually learned that William Seton III happened to be the grandson of Elizabeth Ann Seton herself, the foundress of the nun’s own religious order.

Another one of the museum displays is set up in a slightly smaller room which houses, behind glass, dozens of unique carvings and figurines of the Virgin Mary from various nationalities and artists, many of which were based on a number of Marian apparitions.

One of the statuettes we examined was a representation of Our Lady of Knock, Ireland, the native shrine of which my mother and brother had the pleasure of visiting in September 2018. In contrast to the other pieces of Marian mini-sculpture, the little Knock statue was rather plain a simple, though beautiful all the same. However, quite a few of the other statues possessed more exotic features and ornamentation.

From there, the hallway leads on to an elevator by which people ascend to the upper level. It’s on the upper level where the basilica is located. Off to the right directly after entering the basilica, there is a small side chamber. In it is situated a carving of Christ’s agony on the Mount of Olives just prior to his passion and inevitable Crucifixion. At his feet rest many a candle, most of them lighted, flickering with a restlessness akin to Christ’s in that moment of suffering. The wall by which this little sanctuary was encased was laden with a colorful array of mosaics, which call to mind those at the Basilica of the National Shrine of the Immaculate Conception in Washington, D.C.

At Mother Seton’s basilica, the mosaic pattern forms a panoramic scene of the garden with Christ’s closest apostles falling into slumber all around him. If you make your way up to the front altar in the basilica and look upward, your eyes will be met with an icon of each of the four human Gospel authors: Matthew, Mark, Luke, and John on the surface of the great dome. Over on the right-hand side of the basilica, was the very tomb of St. Elizabeth Ann Seton.

Out in the sunshine again, one may walk leisurely through the trees and the garden across a bricked path. Visitors can enjoy the grounds on their own time or hire a tour guide to show them around. They can see the interior of the old farmhouse Mother Seton and the first sisters moved into in the early 19th century and the slightly less archaic building which was built for the sisters soon after.

Another spectacular yet simple addition to the grounds is a statue of St. Elizabeth Ann Seton seated with two children, instructing them in their educational pursuits, by which runs a trickling fountain. A small Japanese maple grows nearby. It makes for a rather serene sanctuary amid the haven of nature’s greenery and flora.

Whether you enjoy the aesthetics and artistic expression to be found in Catholic shrines or wish to grow your faith from saintly examples like Mother Seton, I would highly recommend a visit to the Elizabeth Ann Seton Shrine.