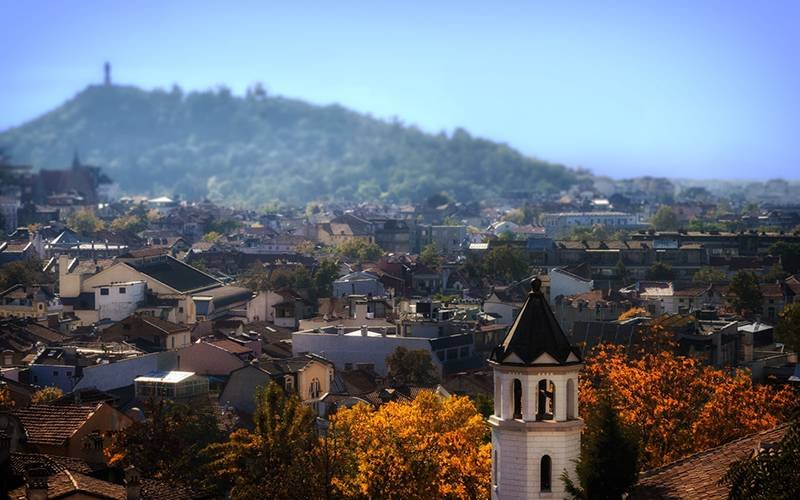 The stunning and almost untouched city of Plovdiv, Bulgaria second city, has been declared to be the capital of culture 2019. Nikolay, from Traventuria took me to visit the city to find out why.

Joining us for the day were the fabulous British couple Anne and Phillip, who are now living in Vancouver. They also used to live in York, so, like me, had a great appreciation for Churches and Roman ruins!

How to get to Plovdiv, Bulgaria

You can get to Plovdiv, Bulgaria by bus from Sofia in 2-3 hours from the main bus station. Free Sofia Tours also do a walking tour which starts at 11 am daily.

However, if you want an in-depth guided tour with a private driver, book with Traventuria. Tours start from just 45 Euro for a tour of Plovdiv and Koprivshtitsa or just 39 Euro for Plovdiv and Bachkovo Monastery. Picking you up from the Alexander Nevsky Cathedral. The more people in your group, the cheaper the price per person!

We started out by looking at the Roman ruins near the East Gate. The city of Plovdiv is over 6000 years old!

Then, when you walk into the city and head towards the East Gate, you will see one of Plovdiv’s most famous houses on your right. Painted and constructed in the typical Plovdiv symmetrical style.
Before you go through the East Gate, explore the old rotunda fortification down a small street on your left-hand side. The alternating red and white stone is indicative of Roman ruins.

You can then head through the gate which will bring you out by the old Market square (Agora).
You can then explore the C18th houses, go inside the ethnographic museum and take in some music by local musicians.

There is also an unexpected church that just looks like a blue house from the outside. Go into it and you will be surprised as to what you find – the gold ornate icons representative of the Bulgarian church. Which was clearly hidden away under communist rule.

As you start to go with the flow of this beautiful city, you can see why it has been chosen to be the 2019 capital of culture. Plovdiv has a much more artsy feel than Sofia and you will find musicians and artists dotted around the cobbled streets.
It reminds me of a little bit of the contrast between Manchester and York in the UK (I wouldn’t compare Sofia to London as London is way too big!)

Walk towards the hill and you will go past ‘Romeo and ‘Juliet’, the two houses so close together and built out so much that they are almost kissing!
When you reach the hill, you will have a fantastic view of the city. Look for the contrast between the old and new town. Also, look out for the communist statue on the opposite hill – notice the direction it is facing – pointing towards the old USSR!

Plovdiv, Bulgaria is also a city of 7 hills (as is Rome), but one of the hills was actually destroyed, again by the communists! Read about it here. The streets of Plovdiv were then paved with its Syenite rocks.

When you walk down the hill, follow the map until you come to the Roman Amphitheatre. This is almost on a similar scale to Ephesus (Turkey) and with Roman ruins this well preserved. I am surprised that Plovdiv is still so undiscovered by tourists.
You will then walk down past the Church of the Holy Mother of God. You can go inside for free to observe the classic Bulgarian Orthodox decoration. Just be sure to respect that it is a religious place of worship.

As you approach the main high street, you will pass the Mosque which looks more like a Church – that’s because it used to be one! Religion was ever-changing in Bulgaria due to it’s a change of rule from Byzantine to Ottoman to Communist.
What you will see something amazing as you approach the main square – the excavation of the ruins of a marble Roman Stadium. That has been tastefully combined with a modern redesign of the main shopping area. This Roman Stadium was built in the 2nd Century AD by Hadrian.

A stadium was based on the Roman term for a length of one stadion – 625 Roman steps or 600 Greek steps, or approx 180 m (590 ft) m. This would have accommodated 30,000 people. And they would have seen ancient Greek style sports and gladiator shows in here during its time of operation.

Head down Ul. Kanyaz Alexander I for shopping, theatre and street art. This main shopping and entertainment street is around 2km long and filled with bustling cafes that spill out onto the streets.

When you get to the big PLOVDIV, Bulgaria 2019 sign, go up those stairs to be pleasantly surprised by some top class, but extremely unexpected street art!
You will also find a ‘hill of art’ where an artist has covered the cliff face of a hill with his drawings of important historical figures.

The way that they have excavated and developed this area around the Roman stadium ruins is phenomenal. You will see art and music almost everywhere you look in this chilled out Bulgarian city.
How Plovdiv has not yet become overrun by tourists is beyond me. I guess that most British travelers only know to visit Sofia and the Black sea coast. The message is clear – see Plovdiv before it gets majorly discovered!

Many thanks to Traventuria for their sponsorship on this trip. I can’t wait to share with you the next part of our trip – Koprivshtitsa, so look out for my next blog!
Have you ever been to Plovdiv? If so, I would love to hear your thoughts.

How I Found Myself in the Peruvian Jungle

Iceland in March – 10 Things to Know Before you Go!

Follow me as I travel the world finding the most amazing temples and historical sites along the way. I travel despite several chronic illnesses and also help others to become digital nomads. When I'm not blogging about Europe, Asia and the Middle East you will find me at home in Liverpool with my husband and Blake the Patterdale terrier!
Thanks for subscribing! Please check your email for further instructions.