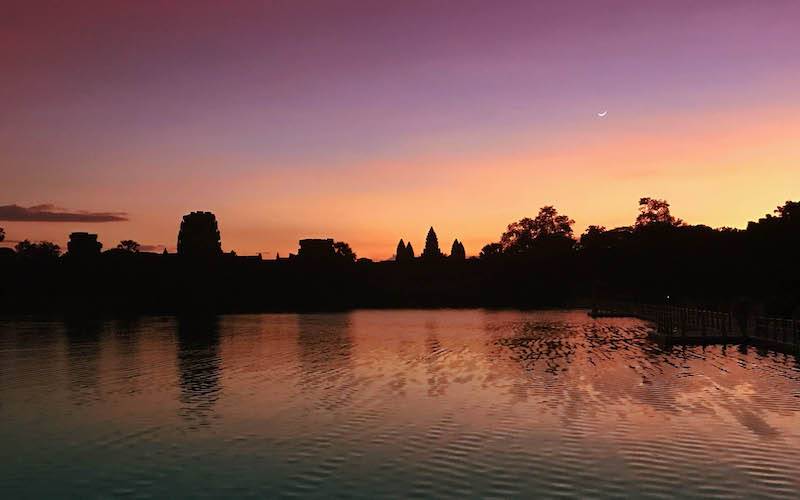 Angkor Wat in Cambodia is the world’s largest and most famous temple complex. It’s a haven for temple seekers and travel bloggers. Stay in Siem Reap and take some Siem Reap tours including visits Originally a Hindu temple complex to the God of Vishnu in the Khymer era, Angkor Wat later became a Buddhist temple in the 12th Century. The best time to visit is of course for the Angkor Wat Sunrise. Here are some amazing photos from the travel blogging community to showcase sunrise at Angkor Wat. Peaceful and beautiful, don’t miss it!

Angkor Wat at sunrise is a truly memorable experience! We visited this majestic temple early one morning during our stay in Siem Reap. In order to catch the sunrise, it’s an early start. In our case, we were up at 4.30am in order to get to Angkor Wat by 5.30am. Not easy when you’re travelling with children, but we made it. We travelled by tuk-tuk, our favourite mode of transport for getting to, from and around the many temples. Our tuk-tuk driver would simply park up and wait for us while we explored. We watched the sunrise over Angkor Wat sitting on a picnic rug, a beautiful experience. The colours were spectacular. Even the children were impressed. Afterwards, we headed off to breakfast, before continuing with our temple exploration. At this time in the morning, there are relatively few people in the other temples so it’s a perfect time to explore.

The sunrise at Angkor requires an early wake-up call, especially if you want to get a spot on the front row. We arrived by tuk-tuk 1 hour before sunrise and got a great spot to see the rising sun over this ancient temple. It was spectacular, but at the same time quite surreal because of all the people next to you. Normally, sunrises are peaceful and most people are sleeping, but not at Angkor Wat.

Here, you’ll share the experience with hundreds, and sometimes up to a thousand other tourists who come to see the sunrise. I still recommend people to go, but be prepared for crowds, and my best tip afterwards is to go quickly to Bayon temple when others go inside Angkor Wat.

Sunrise Tours with Get Your Guide

This photo of Angkor Wat was taken at 5:30am, around 40 minutes before sunrise, outside of the main complex on the banks of the moat. For the actual sunrise, we stood by the temple itself but away from the large crowd that had gathered by the lake trying to get a reflection shot. Although it was fascinating watching the sun slowly appear from close up, this earlier view from outside was my favourite of the day.

The banks of the moat were slightly quieter and the heat hadn’t set in making it seem much more peaceful. The sun really brings the heat with it and shortly after sunrise the temperature seemed to rise dramatically. It’s definitely a struggle waking up at 4am to see the sunrise and the site can be quite crowded but it’s well worth it. It’s also an interesting place to people watch as everyone tries to get the best photos and selfies.

We made sure to wake up really early to see the sunrise in full. I guess, as many travelers have experienced, it can be quite a struggle to get a nice shot. We have never seen so many people for sunrise, as at Angkor Wat. We called it a “war of tripods”. However, as the area around the lake in front of the temple is quite large, everyone will manage to get this ONE shot. It is such a breathtaking view and seeing sunrise over Angkor Wat was a true lifetime experience. We loved how the colours changed and how the sun popped out of the ancient bricks of Angkor Wat.

My trip to see the sunrise was a bit rushed. I was in Siem Reap with kids, and they weren’t keen to get up early to see the same temple again. I had arranged with a tuk-tuk driver to pick me up at 5 and bring me back to the hotel afterwards.

We arrived at Angkor Wat.  I sat comfortably on the stones, and I waited for sunrise. More and more people arrived, some sat next to me, but most crossed the bridge towards the temple. I looked at them and resisted the urge to follow the masses to be a bit closer. Sitting next to the moat I waited. The sun rose, and it was beautiful as the sunrise always is beautiful.

I got to the hotel before 7; my kids were still asleep. It was only after I came home and looked at all the other photos on the web, I realised I had been in the wrong place!

Siem Reap in Cambodia is home to the ancient city of Angkor Wat, the largest religious complex in the world. Walking these stone ruins and abandoned temples are one of the most popular things to do in all of Cambodia.
The sheer size of these structures and the intricacy of each slab of stone makes over 1 million tourists walk these ancient streets. Watching the sunrise from behind the main temple is an early but unforgettable start to the day. Arriving in pitch black, the sky begins to lighten over the horizon. Soon enough, pinks and purples flood the skyline and the silhouette of Angkor Wat is unmistakable.

You might also like to read about the best temples of Angkor Wat according to top travel bloggers. Check out this link for the ultimate Angkor Wat Guide.