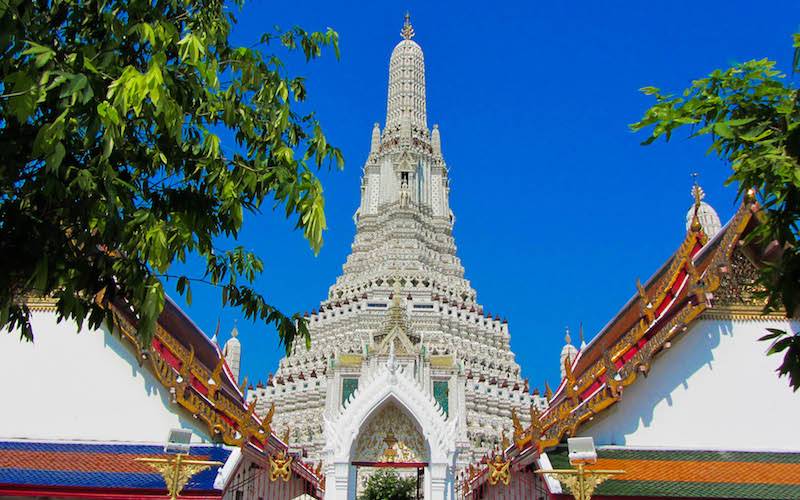 If you are flying into Thailand on an international flight, you will most likely arrive in Bangkok. The capital of Thailand is famous for many things – Khao San Road (Backpackers haven), Ladyboys and markets (What to do in Bangkok) but it’s the Bangkok temples that attracted me the most!

Bangkok has world famous temples and you can follow your temple visit with a lovely Pad Thai and massage. The most popular Bangkok temples are Wat Arun, Wat Pho and Wat Phra Kaew (inside the Grand Palace).

Where to Stay for the Bangkok Temples

I advise staying somewhere along the Chao Praya river as they are accessible by boat. I stayed at the Ibis Riverside Hotel, which was comfortable and reasonable priced. Some of the top end hotels in Bangkok including the Shangri-La, the Chatrium and the Peninsula Bangkok all have free shuttle boats down the river to the main attractions.

How long do I need to see the Bangkok Temples?

It is possible to fit the Grand Palace with Wat Phra Kaew, Wat Pho and Wat Arun into one day, but that day can be very knackering! It depends on your health and also the weather – in the hot season, it may be too hot to walk around after mid-day. If you want to take it easy, see the Grand Palace and Wat Pho on one day and then Wat Arun plus a second temple next such as Wat Prayoon (including turtle mountain – pictured below).  In 1-2 days you can see the main three temples.

For your third day, there are plenty more temples to see on the East side of the River, including Wat Saket (Golden Chedi Temple), Wat Suthat (Giant Swing temple) and Wat Benchamabophit (Marble Temple). If you are lucky enough to have a fourth and fifth day, head to explore Chinatown including Wat Traimit, the Golden Buddha Temple.

Overall, if you can spare the time and love temples, spend at least a week in Bangkok if possible. However, if, like me, you found Bangkok to be busy, smelly and stressy, fly North to explore the temples of Chiang Mai.

One of the best ways to travel between the main Bangkok temples is to take the ferry boat down the Chao Praya river, If you are taking the ferry boats, remember that there is a local boat and a tourist boat. The local boats (orange flag) are around 15 THB – very cheap, but remember that they will cram loads of people on. The tourist boats (Blue Flag) are around 40-50 THB. They will be less crammed, but it depends if you are on a strict budget and if you want to go like the locals do!

Be aware that there will be a lot of ‘boat touts’ trying to get you on the much more expensive private long boats (pictured above). They are over priced and have been known to rip tourists off by not taking you to where you want to go unless you double the price! As I mentioned, if you are in a luxury hotel on the river, check if you have a boat service included – many of them do have free boats for their customers.

Wat Arun, the ‘temple of Dawn’ is one of the most famous of the Bangkok temples. Wat Arun is famous for its beautiful Prangs covered in ceramic tiles.

To get to Wat Arun, you can take a ferry down the river from Sapphan Taksin boat pier to Tha Thien and then get the small river crossing boat for just 4 baht to get to the other side of the river (most of the other temples are on the East side of the river). You need to pay an entrance fee of 100 TBH to get into Wat Arun.

Either side of the main entrance to Wat Arun are two spectacular Yakshas – temple guardians that are brightly coloured and protect the temple, warding off evil.  The white one is Sahassa Deja and the green one is Thotsakan (Source: https://www.eatsleepbreathetravel.com).

The main Prang is a massive 82m tall. Don’t underestimate the journey up to the top – it gets harder, as is the Buddhist journey to enlightenment. The four surrounding smaller prangs are dedicated to the wind God.

In 1768, the future King of Taksin travelled to Thonburi (West side of the River) from Ayutthaya to establish a new capital on the banks of the Chao Phraya River. Legend has it that it was Dawn when he arrived, hence the name ‘temple of Dawn’. At Dawn, the temple is beautifully lit up. Wat Arun temporarily housed the Emerald Buddha, until it was moved to Wat Phra Kaew during the reign of Rama III.

Wat Pho is famous for its reclining Buddha – one of the most important Buddha postures as it depicts the Buddha close to reaching Enlightenment. The reclining Buddha is 42m long and covered in Gold Leaf. Arrive at Wat Pho as early as possible to avoid the large crowds and get your pictures.

The Buddhas feet are 4m long and covered in 108 mother of pearl ‘laksanas’ (auspicious symbols) which are characteristics of the Buddha. This is significant in Buddhism because it was 108 actions that helped the Buddha to achieve enlightenment – similar Buddha footprints have been found in the temples of Myanmar in Bagan.

Wat Phra Kaew is located inside the Grand Palace, and this is the temple that you will need to dedicate the most time to due to the beauty of the temple compound and palace itself.

If you enjoyed this blog, you might also like to read about taking an Ayutthaya day trip from Bangkok. Also, follow this link if you need a Bangkok Itinerary.

What to wear when Visiting Temples in Thailand

A scarf is a good thing to have handy in Thailand as you can use it to cover yourself if you are wearing a vest top or maxi dress. Men should avoid shorts and wear t-shirts or a smart-casual shirt.

You will need to remove your shoes before going up the temple steps so wear some comfortable sandals or shoes that you can slip on and off. Birkenstocks are a good option.