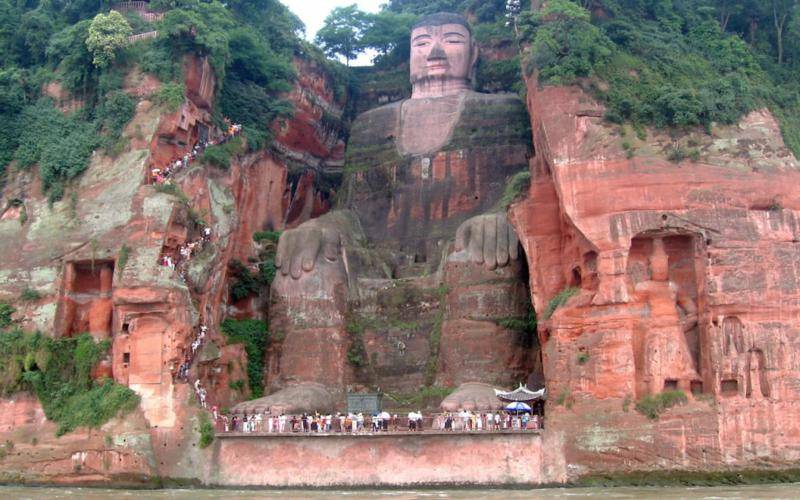 During our month in China following a journey on the Trans-Siberian express, I headed to Sichuan Province to explore the cultural delights of Chinese Buddhism. Sichuan province is famous for its Spicy food, giant Panda Reserve and sacred Mountain of Buddhism – Mt. Emei. It’s also home to the biggest Buddha in the world – Leshan Buddha.

Our initial base in Sichuan province, China, was the Traffic Hotel in Chengdu. Chengdu is an industrial metropolis and IT centre of Sichuan province. The Traffic Hotel itself was comfortable with air conditioned rooms, TV and toiletries provided. There is also a restaurant and Spa on site. Perfect for couples and solo travellers wanting to upgrade from a hostel to a private room and something more comfortable.

Travel Tip: Try Chengdu Hotpot! Choose your raw meat from the raw meat buffet and hold it in the hotpot bubbling sauce in the middle of your table with your chopsticks. I did see a guy with a plate full of monkey brains – not quite for my taste, I went for the beef!

Staying in Chengdu gave us time to explore the Wenshu Yuan Buddhist Monastery before heading off to the sacred sites further outside the city. It’s good to get to the Wenshu Yuan Monastery early in the morning to catch the monks at prayer. Enjoy art by famous calligraphers and a relaxing tea in the tea house.

Wenshu Yuan Monastery is the home of the Buddhist Association of Sichuan Province and Chengdu City. It was initially built in the Tang Dynasty (618-907) and was once called Xinxiang Temple.

Our Chinese Tour of Leshan and Emei Shan

The Traffic Hotel has a tourism booth where you can book your tours. I specifically wanted to see the big Buddha (Leshan) and Mount Emei. However, there was only a Chinese speaking tour available. As it was so cheap, and ticked off all the places I wanted to see, I decided to go for it! And what an adventure it turned out to be!

Be warned that tours of China often include stop offs at jewellery shops and Chinese medicine showcases. Go along with this – you don’t have to buy anything. It’s part of the culture and the tour guides also make some commission from these stops. Be aware that in some of the Chinese medicine stop offs, you might see things that make you a little uncomfortable, such as body parts of endangered species (e.g. turtles) on sale for healing properties.

The Biggest Buddha in the World – Leshan Buddha

Leshan Buddha was just under 2 hours drive South from Chengdu. I was astounded when I approached the Leshan Buddha, the biggest Buddha in the world – his toe was bigger than my head!

Be aware that the Chinese like to decorate ancient statues and relics with flags and adornments that any westerners may find ‘tacky’ and distracting. Don’t worry, just go with the flow. You may see red drapes and colourful flags hanging from the Buddha. Red symbolises luck and happiness.

Climbing the steps up the Leshan Buddha (approx 45 minutes) is well worth it, because at the top you will be greeted by the sacred Wuyou Buddhist temple created during the Tang Dynasty (618 to 907).

The hike weeds out the less serious temple seekers, and is often calmer and less crowded than the giant Buddha itself. Many people stop off for a picture of the giant Buddha and then continue on their way.

I’d recommend that you make the hike up to the Wuyou temple and make sure that you cross the bridge to see the beautiful colourful Buddhist statues. There are life sized statues of 500 arhats (disciples of the Shakyamuni Buddha – the Prince Siddhartha Gotama).

If you are interested in an English speaking tour of the Leshan Buddha, the biggest Buddha in the world, you can book one through Viator Travel, a Tripadvisor partner.

To follow my China travels on to Emei Shan, read my next blog! I also recommend that while you are in this area of China, you spend a Day with the Giant Pandas!