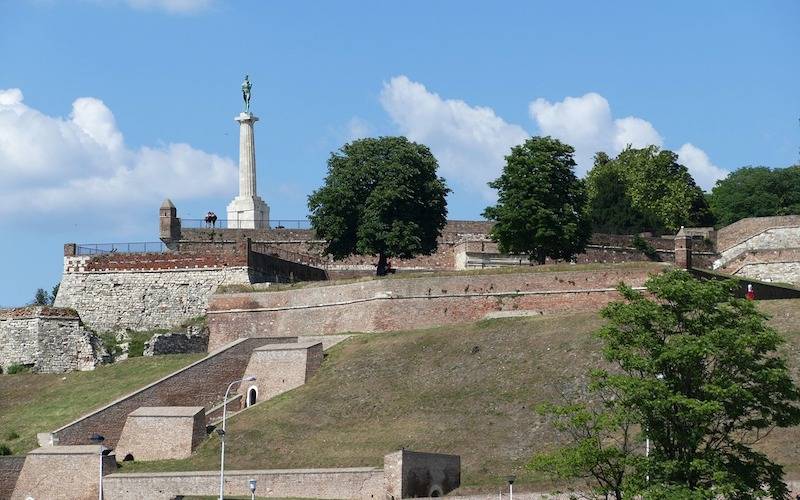 You will be pleased to know that I made a full and fast recovery from my disgusting bout of Travellers Diarrhoea! Today, when I woke up, Katerina at Trip and Sleep told me that they were moving me to a private room where I could have my own bathroom and a quite to sleep and work ;-). I then went out for some Belgrade sightseeing with my new Russian friend Sergei who I met at the hostel. I hope that you enjoy my Belgrade video and photo essay!

It’s great to go on a Belgrade walking tour, but we did all of this ourselves without a proper guide. If you are interested in a guided tour for your Belgrade sightseeing, you can book a 2.5 hour walking tour of Belgrade on Get Your Guide.

We started from Belgrade Fortress (above) and then headed down Knez Zihailova street. I explored the fortress full on the Underground tour of Belgrade on a different day.

Belgrade is not such a large city – you can cover a lot of ground by foot. We headed down the famous Knez Mihailova street to soak up the cafe culture and see the stunning architecture from the 1870’s.

Sergei told me that a lot of this architecture is similar to the architecture of Saint Petersburg in Russia, because many buildings were designed by the same architects.

Walking down the main high streets of Belgrade, I saw Christmas trees and decorations still up! Apparently, they don’t put them up until very close to Christmas, so they leave them up longer.

We also walked past Hotel Moskva, on of the most popular hotels in Belgrade.

We continued to walk past Hotel Moskva, with the hotel on our right and then past the Parliament buildings on the left.

Belgrade has an interesting mish-mash of architecture to say the least. There doesn’t seem to be any laws protecting old buildings, or stating what can be built next to them, as you can see…

There is a monument of the last Russian Tsar, Nikolai II to commemorate that he helped Serbia during the First World War.

We then came to the cultural centre on our right hand side, which displayed several interesting gargoyles…

We had to cross a main road before reaching Sava Church itself. Sava Church is one of the biggest Orthodox Churches in the world.

Sava Church was built in dedication to Saint Sava, the founder of the Serbian Orthodox Church, and his remains were cremated on the location that the Church was built. You can go inside Sava Church for free, but respect that it is a place of worship, so no phones. Cameras are allowed. However, the inside is currently under reconstruction.

The second Church that we visited, with a bit of a park detour (the Church is located in Tasmajdan Park), was St Marks. St. Marks Church is built in a Serbian-Byzantine architectural style and dedicated to Mark the evangelist and apostle.

To the right of the entrance of St. Marks, you will find the Tomb of Emperor Stefan Dušan, the last King of Serbia. Inside St Marks Church is a beautiful and elaborate iconostasis displaying the Last Supper and Serbian Orthodox Saints.

We walked past the Belgrade House of National Assembly, which is recognisable by it’s turquoise dome and two horse statues at the front (above).

When we arrived at the Presidency building Novi Dvor, we were lucky enough to catch two excited things occurring simultaneously! The first was the changing of the guards and the second was Serbian democrat politician Boshko Obrandovich (Dveri Serbian party) speaking to the Press. Behind him was a ‘Never NATO’ banner. Sorry, I don’t speak Serbian, so I cannot translate what he was saying. However, this preceded a large scale ‘no NATO’ protest which occurred on 20th February 2016 (added retrospectively).

Church of the Holy Ascension

We then headed down Kneza Milosa to stumble upon the third Church of the day –  Vaznesenjska crkva, the Church of the Holy Ascension.

Sergei then wanted to show me buildings which were bombed by NATO in 1999. The evidence is clear to see, and the sad thing about this attack was that many civilians and children were killed.

NATO state that the attack was to prevent human rights violations from occurring in Kosovo. Many Serbians say that it was about money and American politics. Shocking is an understatement – I can’t believe that this is still here for all to see. It’s interesting to see that the NATO that many Serbian politicians now want to join is the NATO that did this to their capital just 16 years ago.

We headed back to the hostel via Skadarlija. Skadarlija is the Bohemian quarter of Belgrade and situated near to Republic Square. You will see a signpost at the start of Skadarlija, which pinpoints the beginning of a cobbled street full of bars, clubs and restaurants. It has a bohemian and vintage feel.

That brings me to the end of our wonderful day of Belgrade sightseeing. But, one more thing before I sign off for today. I know you have been dying to meet my Rrrrrrussian friend, Sergei….rest assured, he’s not always being sill like this! (Well maybe….)

If you are spending time doing some Belgrade sightseeing, you might also want to read about my Underground Belgrade Tour and Adrenalin Belgrade. You will also want to include some of the Belgrade Nightlife – maybe a fortress or boat party!

Where to stay in Belgrade

One of the most prestigious hotels in Belgrade is Hotel Moskva and it’s central location, luxurious reception and free WIFI make it a great choice if you have the budget. Other great options include Metropole Palace and Hotel Majestic.

If you are on a budget and looking for a cheaper hotel, go for Hotel Slavija. For hostels, check out City Zen Hostel and Stella di Notte.

5 thoughts on “Belgrade Sightseeing with my new Russian Friend Sergei”