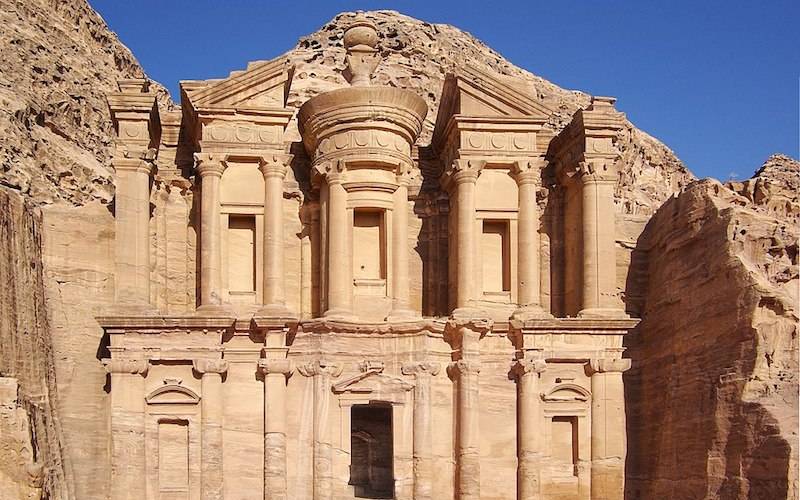 Jordan is a country located on the East Bank of the Jordan River, bordered by Saudi Arabia, Iraq, Syria, Israel and Palestine.  Along the western border of the country is the Dead Sea and there is also a short coastline on the Red Sea.  It has long been a crossroads between Asia, Europe and Africa and has a long and varied history.  This also means some great Jordan tours to experience the best of the country.

Amman is the capital of Jordan and the political and cultural centre.  It is in the north-central area of the country and is a very modern city with a very long history – it dates back to Neolithic times.  It even gave its name to an Iron Age settlement – the Kingdom of the Ammonites.  Today it is one of the most visited cities in the region.

Check availability of the most popular hotels here.

This is a great tour to see some of the less well-known spots around Amman.  It includes a number of castles dating from the 7th and 8th century that was built by the caliphs of the Umayyad Dynasty as places to get away from the city and as hunting lodges.  Learn about this period of history and see the UNESCO listed Qasr Amra, one of the most famous castles in the country.  Then travel to Qasr Al-Kharanan, a two-level fortress built on Roman foundations that were once used as a headquarters for TE Lawrence – also known as Lawrence of Arabia.

This tour combines the best of Amman and a trip to nearby Petra, one of the Seven Wonders of the World.  Visit the heart of modern Amman with its skyscrapers and restaurants and do a little shopping in the high-quality boutiques.  Then move to the older areas of the city and see the tree-lined neighbourhoods, the artisan shops and elegant white buildings – city codes say they must all be white!  The second part of the tour is a trip around Petra with an English speaking driver and guide to see this amazing location for yourself.

This Amman tour includes the best of the modern city and its history.  Learn about its early times when it was part of the Roman Empire then the Nabataeans and Byzantines.  See the King Abdullah Mosque with its famous blue dome and the Coptic Church nearby.  Then visit the Citadel with a local guide to see relics from all periods of the city’s history.

Next, you will go to the Roman Amphitheatre which dates to the 2nd century, then the Museum of Popular Traditions.  Visit the burial place of the late King Hussein and spend time in the markets and mosques in the area before heading to a tour of the upscale areas of the city with its luxury malls and stunning properties.  The final part of the tour is the Jordan Museum with the car collection of the Royal Family and the mosque built by the late King.

Amman is an ideal base to explore other parts of the country and these Jordan tours leave from the city to explore a little further afield.

Private Tour to the Dead Sea and Baptism Site

The Baptism Site is a very important location on the River Jordan where it is recognised that Jesus Christ was baptised.  It is also the place where the Prophet Elijah ascended to heaven and is important to Christian, Jewish and Muslim faiths.  This tour takes you to visit this location.

After this, you will visit the location said to be the site of the cities of Sodom and Gomorra, which were turned to salt and created the Dead Sea.  At 400 metres below sea level, it is the lowest point on Earth and the water is therapeutic due to the salt and minerals they contain.

Petra is known as one of the Seven Wonders of the World, carved into the pink rock face of a narrow gorge almost one kilometre in length.

This Jordan tour gives you the chance to spend time at this amazing location, see the Roman-style theatre which seats 3,000 people, the temples, altars and collonaded streets before visiting the two museums on the site, Petra Archaeological Museum and the Petra Nabataean Museum.  You will finish with a visit to nearby Wadi Musa, a Bedouin settlement where you can purchase local handicrafts and pottery.

One of the longer Jordan tours, this itinerary is spread over three days.  On the first day, you will see the Dana Reserve and then Shobak Castle before visiting Little Petra.  You will stay overnight in a hotel in Wadi Mousa.  The second day is spent exploring Petra and the many stunning sights there before staying the night in Wadi Rum.  The final day is a Jeep safari followed by a visit to the Dead Sea.  The return goes through the Great Rift Valley to Aqaba City then sunset over the Dead Sea before returning to Amman.

If you are staying in Jordan a little longer and want to take in a few more tours, here are a couple of ideas to help you plan your time.

This tour leaves from Eilat in Israel and visits one of the Seven Wonders of the World, Petra.  During the tour, you will pass the Obelisks then into the 1200 metre long canyon called the Siq.  Then walk through the red stones to see Petra.  Inside you can see the Corinthian-columned, the Ad Deir monumental building with its tw- storey high columns and the Roman theatre.  You will also see the sacrificial altar and the various unique tombs inside.

This 10-hour tour from Aqaba visits Wadi Al Mujib, known as the lowest nature reserve in the world.  See the Dead Sea before entering the gorge, the lowest point on earth and a spectacular natural landscape with its rich salt deposits.  You will have three hours there to swim, sunbathe and enjoy lunch at the five-star hotel before returning to Aqaba.

What to pack for the Middle East

Consider packing conservative clothing and a shawl or headscarf for women if you would like to visit religious places. Some comfortable sandals work well in the Middle East as it can be hot so they will let your feet breathe. It can get extremely hot in some parts of the Middle East and so sun cream is essential.

It’s a good idea to pack conservative clothing for the Middle East. Avoid short skirts and low cut tops or spaghetti straps. Comfortable trousers and linen tops are great. Long skirts and Maxi dresses also work really well and are comfortable with the hear. Don’t forget your sunglasses, and pack your prescription sunnies if you have those!