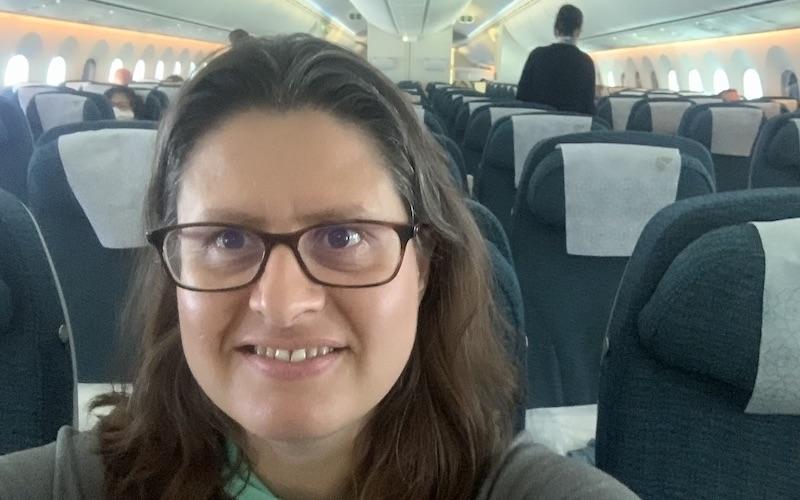 First of all, this is a very difficult time for everyone with the Coronavirus pandemic and first of all I hope that you are all safe and ok. I wanted to document my experience in Oman during the escalation of the crisis. Many of you have been asking about me too and concerned for my well being and so I thank you all for your kind words.

It is NOT a fun time to be a travel blogger!

When I arrived in Oman

I arrived in Oman in early March when there were roughly 4 cases of Coronavirus in UK and 2 in Oman. It was a simple case of a form and health check at the airport, getting my visa okayed and all was good. Sultan Kaboos Mosque and restaurants were all open and no-one was wearing face masks!

Some tours with Get Your Guide were getting cancelled, but local tour operators were still running in Muscat and so I had a fantastic time visiting the desert and mountains of Oman with my fabulous dish-dasher wearing private driver, Idrees. At least I got to see Wadi Shab and Shaqiya Sands.

A couple of days later, I switched on my phone after our trip up Jebel Shams to receive an overload of messages that nearly made my iPhone XS explode! Things were operating quite normally at this time in Oman, but the cases had gone up to around 24 at this point.

Back in the UK, it sounded like the Coronavirus bomb had gone off big time – empty supermarkets and people were having bust-ups over loo roll! (Loo roll is not a problem for me – I got a bum-gun!!!!) Several of my work colleagues were already suffering with the virus by this point ;-S

For the first time in 25 years of travelling, the Foreign Office had advised against all travel and several countries in the world were closing their borders. There were indications that some shit was gonna go down, but I would have never predicted this.

It was a bit overwhelming and too many messages from lots of people all saying different things! Fly back to the UK now! Don’t go back to the UK it’s dangerous! You’re going to need repatriation! Stay as an Expat! Ok, I took a step back to prevent a panic attack even greater than the one where I realised I had been burgled while I was in hospital in the Philippines….

I’ve dealt with similar things in the past including dealing with the British Embassy, insurance companies and hospital emergencies. I engaged in ‘social media isolation’ as well as self isolation and headed to the Foreign Office website and got the details of the British Embassy in Muscat. The first thing I always say is that you shouldn’t panic in this kind of crisis, because it makes it harder to assess the situation and take the appropriate actions.

Who to Turn to During a Crisis when Travelling

People sending loads of messages telling me what to do or suggesting things isn’t so helpful – in fact it just instills panic. Get in touch and support of course, but not everyone knows the situation on the ground.

I’ve been judged many times during my travels over the years – Rwanda, Israel, and I guess now Oman. When the life of a travel blogger or digital nomad is one that you choose, you kind of expect this particularly from non-travellers back home who watch your Facebook page with jealousy and many are quick to criticise when they think that you have done something wrong. The reality is that most travellers would have been travelling in March when things started to escalate. Many were abroad, like myself, when the state of pandemic was announced.

The online travel community were going crazy – telling people off for the content that they were producing, telling people that they were doing the wrong thing, scare mongering about visas. Even people on Facebook making racist comments about the Chinese (yep, these were unfollowed!). Has the world gone mad?!? It seems that a crisis situation can bring out the best and worst in people.

Changing my Plans and heading back to Muscat

After sleeping on it and checking the British and Omani government websites, I made the decision to miss out the Salalah leg of my journey (sacrificing the flight) and self isolate here in Oman. I headed back to my Muscat apartment – just 15 minutes from the airport and just 20 minutes from the British Embassy and in familiar surroundings – it was a good call.

In all honesty, if you had asked me at this point what I really wanted to do it would be to extend my visa and stay in Muscat until it all calmed down. I am high risk with asthma and endometriosis and did NOT want to head back to the UK to catch it only to be treated in an over-burdered NHS that already cannot handle my allergies. I had money in the bank, good insurance and more time on my tourist visa. There were opportunities for me to do content writing in Oman or get a working visa through International Schools in Muscat to help set up the virtual classrooms.

But with my husband and Blake dog at home and the FCO advice, I needed to get back. The flights were a challenge to sort out simply because everyone in the aviation industry was so over-burdened. There were up to 3 hour waits to contact airlines and booking platforms. Instead, when I couldn’t get through I raised a ticket, only to find out that it was a 6-8 week wait for a response!

Following 3 days of isolation in Muscat learning Arabic and sorting stuff out online, I decided to rock up to the Oman Air desk at Muscat Airport. I’ve gotta say that Oman Air were lovely – read my Oman Air Review. I found out that my flight in 4 days was actually cancelled and rescheduled for the next day, and as I didn’t want to risk waiting that long I was able to bring my flight forward by 3 days for a cost of just £50.

My flight home on 23rd was lovely – the airport was like a ghost-town which was a bit of a shock. Muscat airport completely closed down by 29th March (just 3 days after my original flight home). As I walked through passport control in England, the Foreign Secretary called for all British travellers to return home. What timing!!!

Over the next few weeks I’m going to be in isolation at home during the pandemic. I plan on using this time to write up blogs and edit videos from my Oman and Poland trips. Enjoy!