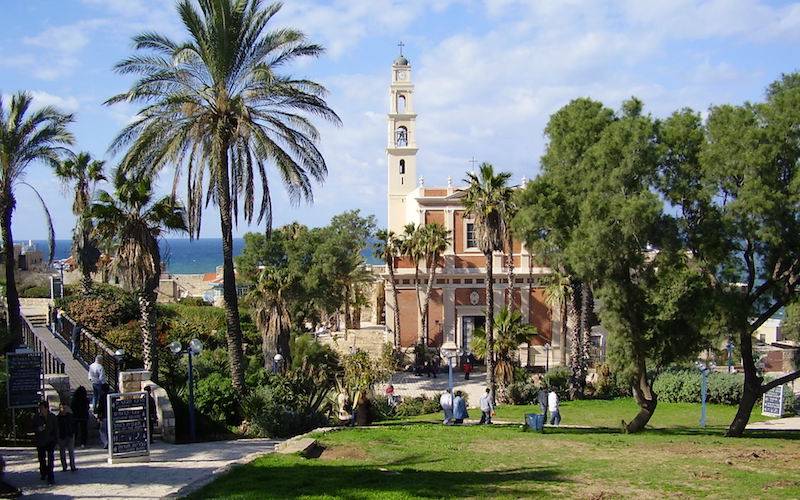 From our Air BnB on Dizengoff Street in Tel Aviv, we walked South along the beautiful coastline to explore the religious buildings of Jaffa, Tel Aviv’s Old Town. Jaffa, or Yafo in Arabic, is full of Islamic and Biblical history.

The Walk to Jaffa from Modern Tel Aviv

The coastal walk from Tel Aviv to Jaffa will take approximately 40 minutes to one hour, and offers stunning views of the sea. I Instagramed my walk around Jaffa, and here’s what I found…

Book accommodation on booking.com or Agoda.

As you approach the old town of Jaffa from Tel Aviv, you will first be greeted by the stunning turquoise domed minaret of the Al-Buhr Mosque. This small mosque is built from sandstone.

I always love to see a city view that combines #Christian and #Islamic #architecture. This is a view of #Jaffa #OldTown in #TelAviv from the #seafront. #israel #travel

The exact date of the building of the mosque has not been determined, but it does appear in drawings of Jaffa as early as the 17th Century.

I felt extremely privileged to enter an Armenian Church service at St Nicholas’ Monastery, further down the seafront from Al-Buhr Mosque.

The Armenian Church is one of the most ancient Christian communities, being the first country to accept Christianity as it’s official religion. Many Armenian Christians lost their lives in the Armenian genocide of 1915-1923 under the Ottoman empire.

Jaffa – Inside the Old City

From the seafront, we then walked into the Old City. Jaffa is mentioned four times in the Hebrew Bible, and is said to be the site of the story of Jonah and the Whale. The old city of Jaffa is referred to as the Gate to the ancient world.

Peering through the #narrow #streets of #Jaffa to the #blue #door of an old #Church. #TelAviv #travel #history #israel

As we walked uphill to explore, we stumbled upon the ancient Tanner’s house…

It is said to be the place where St Peter raised Tabitha and one of Jesus’ disciples from the dead ‘on the roof of Simon the Tanner’s house by the sea’ according to the Acts of the Apostles. For this reason, Jaffa was the perfect location for St Peter’s Church.

The First Jewish Hostel in Jaffa

On the walk upwards towards St Peter’s Church, we stumbled upon the first Jewish Hostel in Jaffa, built in 1740. The Synagogue and Mikveh (bath for ritual immersion) re-opened in 1948 and are still in use.

The sign on the door of the first #Jewish #Hostel in #Jaffa. #TelAviv #OldTown #israel #travel #history #religion

St Peter’s Catholic (Franciscan) Church (built 1664) is one of the largest old buildings in Jaffa, and definitely my favourite. It was destroyed and rebuilt twice during the eighteenth Century. The current structure was built between 1888 and 1894 by the Spanish Empire, and as a consequence, the windows depict Spanish Saints.

At the very top of the hill, you can find the remains of the ancient Lion Temple. It got it’s name from a lioness skull found within it, which was apparently used in a ritual performed here by the Canaanites and from an altar that served in the worship of the Canaanite goddess Ashthoreth, who is depicted astride a lion.

The #remains of the #ancient #liontemple of #Jaffa. #travel #temples #history

Part of a statue of Aphrodite, the Hellenistic version of Ashtoreth, was also found here. Hundreds of years later, pilgrims associated the site with the worship of Andromeda, daughter of the King of Jaffa. These provide clues concerning the history of the city’s ancient mythology.

Continue walking away from the seafront until you come to St George’s Greek Orthodox Church, the Oldest Church in Jaffa and famous for it’s tall bell tower.

The iconography inside are classic Greek Orthodox style.

There are two more Churches in Tel Aviv that I didn’t get chance to find – St Anthony’s Gothic style Catholic Cathedral and the Russian Orthodox Church. If anyone has pictures of these, please share them!