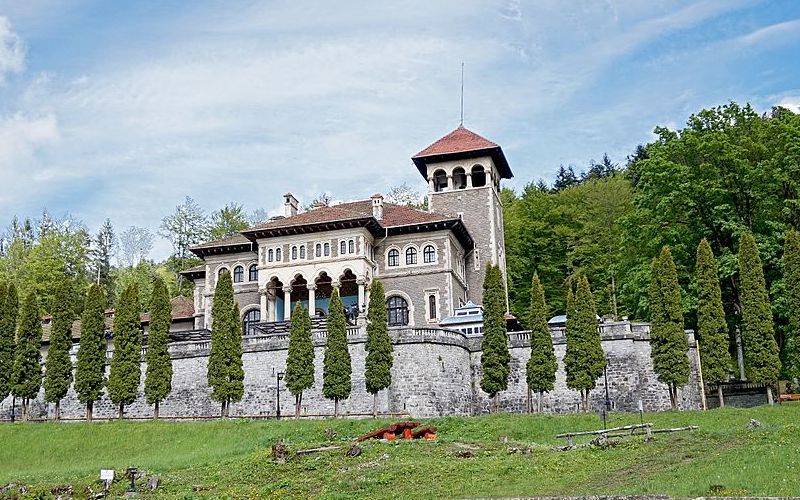 Maybe castles are not the first thing that comes to mind when you think about Romania… Nonetheless, the country has a rich historical heritage, and castles are also part of it. Some of these Romanian castles are in great condition, have beautifully ornate rooms, are filled with art, and receive hundreds of visitors every day. Some other castles have, unfortunately, been left in ruin, but are still attracting visitors thanks to their charm, historical importance and beautiful location.

So let’s see some of the best Romanian castles you can visit:

Better known in the world as Dracula’s castle, Bran Castle is located in Transylvania, between two mountain peeks: Bucegi and Piatra Craiului. The castle can be found at a distance of 30 km away from Brasov, and 160 km away from Bucharest, surrounded by rich forests, rivers and gorges.

Bran Castle became famous throughout the world thanks to the fictional character, Dracula. There was, of course, never such a vampire living in the castle… The historical figure connected to the legend of Dracula is, in fact, Vlad Țepeș, one of the medieval rulers of Wallachia. He is known to have been one of the fairest, but also one of the most unforgiving Romanian rulers. No crime remained unpunished, and it is said that during his reign, people were so afraid of repercussions, that if you had left a bag of money on the street, no one would have taken it. The name Țepeș was actually a nickname, meaning “The Impaler”, because the way he was punishing wrong doers was by impaling them.

The building of Bran Castle was completed in 1388, and, because it was located on the eastern border of Transylvania, it was initially used as customs and as defending fortress against Turkish invasion. The castle has had a long and tumultuous history, and it is now owned by the descendants of Princess Ileana of Romania.

To reach Bran Castle from Bucharest, you can rent a car, or you can take a 3 hours and a half train ride to Brasov, followed by a 45 minutes bus ride from Brasov to Bran. There is no airport in the area yet, as Brasov-Ghimbav Airport is still under construction.

Corvins’ Castle is one of the most representative Gothic medieval castles in Europe. It is located in the south-western part of Transylvania, in the Poiana Rusca Mountains, in the middle of Hunedoara county, and close to the city of Cluj-Napoca.

The story of Corvins’ Castle started in the 14th century, when it was just a fortress. It became a castle thanks to Ioan of Hunedoara, ruler of Transylvania, who in 1440 started the works that began the transformation of the building. The construction works were finalised in 1480, but the castle continued its transformation until the 19th century, with different rulers bringing different changes and modifications, all of which were meant to make it look more modern.

The name, Corvins’ Castle, comes from Ioan of Hunedoara’s family name, a name that was carried over by his descendants until 1504 when Ioan Corvin, the last male bearing the family name, died. The name Corvin comes from the word “corvus” that means “corb”, in Latin.

Peleș Castle is located in the southern part of Transylvania, near Sinaia, and close to Brasov. The castle was built by Carol I, the first king of Romania. The castle brought a lot of prosperity to the area, transforming the small village of Podul Neagului into Sinaia, the thriving, rich mountain resort it still is today.

The construction works started in 1873 and were finalised in 1914. The palace was royal household until 1947 when the royal family was forced to abdicate and the building was taken by the state. It went back into the ownership of the Romanian Royal Family after the revolution of 1989 that marked the end of the Communist regime in Romania.

The castle is impressive both on the outside and on the inside. Built in the Neo-Renaissance style, Peleș Castle hosts intricate architectural details, and numerous artwork, weapons, clothes, jewellery and furniture collections.

To get to Peleș Castle from Bucharest, you can rent a car or take a bus (it is a 1 hour and 45 minutes ride), or you can also take the train.

Banffy Castle is located in the centre of Transilvanya, in Bontida, a small village near Cluj-Napoca. With an architecture that mixes Baroque, Renaissance, Romantic and Neo-gothic influences, Banffy castle impresses with its beauty and charm. During its glory times, it even inspired people to call it “the Versailles of Romania”. It is, hence, a pity that this jewel was not maintained properly throughout the years.

Of course, Banffy Castle has a trying history behind. Dionisie Banffy started the construction of the property in 1668, and the castle was used as a residence by the Banffy family until 1944 when the castle was attacked and burned by the German troops as they were withdrawing from Romania. During the following years, it was used as a hospital and as deposit for construction materials, as well as the headquarters for the Bontida Agricultural Co-operative.

The Communist regime paid no attention to it. But Banffy Castle is finally seeing better days. Prince Charles took it under its protection and invested in its reconstruction, and its popularity has grown much more thanks to Electric Castle, the annual Romanian music festivals that take place near it.

To get to Banffy Castle from Bucharest, you can rent a car (there are 437 km between Bucharest and Cluj-Napoca), or you can take the train (you might have to change trains in Cluj-Napoca).

The one who built this castle in 1911, Prince Gheorghe Grigore Cantacuzino, was one of the richest men in the country during his time, and spent a colossal amount of money to build this property as a home for his family.

Cantacuzino Castle is located very close by to Peleș Castle (only a couple of kilometres away), and while it is not as grand as Peleș, it contains a lot of wealth and beautiful objects. Also, the castle sets itself apart with its architectural design, this being the largest building constructed in Neo-Romanian style, a style that revived Romanian traditions and connected them to the present.

Cantacuzino Castle is located in Busteni, in Prahova county, and can be easily reached by car (there are 147 km from Bucharest to Busteni), or train (approximately 1 hour and 40 minutes ride).

Other Romanian Castles to Consider

There are many other large properties in Romania that bear the name ‘castle’, but cannot be compared to Bran Castle of Corvins’ Castle either in size or grandeur. However, they are worth a visit. So, if you have time, you can also pass by the Royal Castle in Săvârșin (Arad county), Bethlen Haller Castle in Cetatea de Baltă (Alba county), and Sturdza Castle in Miclăușeni (Iasi county).

I hope that visiting all these Romanian castles will teach you something new about Romania and its history. And I hope that they’ll make you hungry for more.

It really does depend on the time of year that you go to Romania as to what to pack. If you are going in the winter, you will need jeans and sweaters and a rain jacket. Walking boots are great regardless of time of year as there are some amazing hikes in Romania.

If you are travelling in the summer, you will need lighter clothing that is comfortable for the high 20s and beachwear if you are heading to the Black Sea.

Pack a couple of dressier items such as a long Maxi dress or skirt and blouse in case you want to go to the Opera or night out. Include one pair of nice shoes for evenings as girls do dress up in Romania.

The people in Romania are extremely generous and so it can be a good idea to take gifts from your home country such as biscuits or drinks for people you meet along the way and for anyone who helps you on your travels.