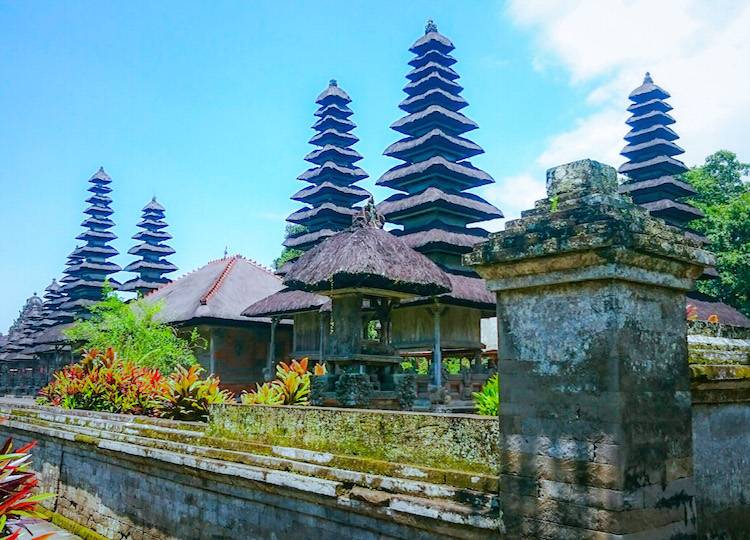 *This is a guest post by Medha Verma from www.hoppingfeet.com, who is here today to introduce Tanah Lot and the best temples in Bali.

The Best Temples in Bali

Bali is one of the most popular Hindu temple islands and on my recent visit, my top priority was to explore some of these places of worship, which are set against exotic backdrops. In fact, what stands out about these temples, more than their grey-black stone walled architecture that dates back thousands of years, is the setting they’re in – be it in on a massive rock in the middle of the ocean (Tanah Lot), or on the edge of a cliff jutting out into the sea, or amidst a calm and picturesque lake, or surrounded by tranquil and tall green trees.

A tour of the island (best done on a scooter) will make it seem like there are more temples (known as Puras) in the city than houses. Each of these has a striking quality- the architecture is visibly ancient yet the layout is quite contrary to the Hindu temples you find in India. Although enclosed within high walls, once you’re inside a temple, the compound is an open space, spread out over a large area and linked through intricately carved gates. Here are some of the best temples in Bali. 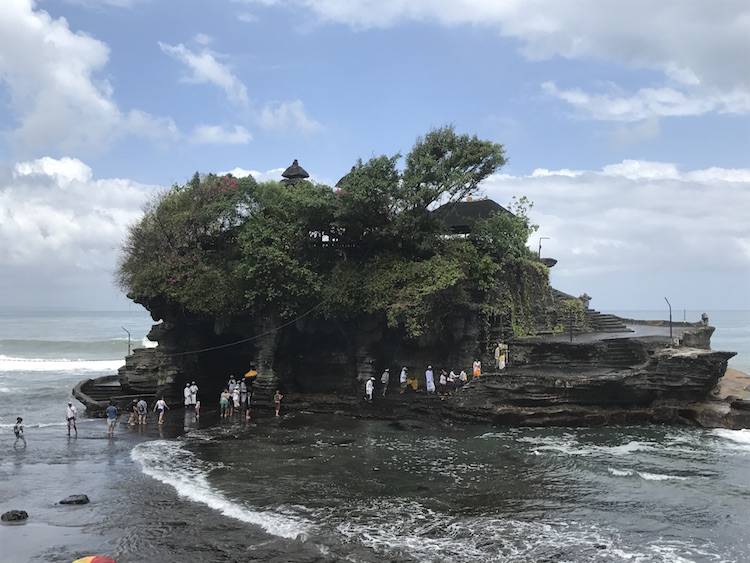 A perfect example of a ‘pura segara’ (a temple located by the sea to appease the Sea Gods), Tanah Lot is an island temple that many people visit for the delightful sunset. However, day pictures of this stunning temple which is perched on a rock and gets surrounded by the blue waters of Bali’s sea during the high tide, are equally mesmerizing! The access, however, is limited to during the low tide. A number of cafes situated right next to the temple offer amazing views from an elevated platform and a walking path takes you around the coastal area, with some breathtaking views of the waves crashing against the rocks. 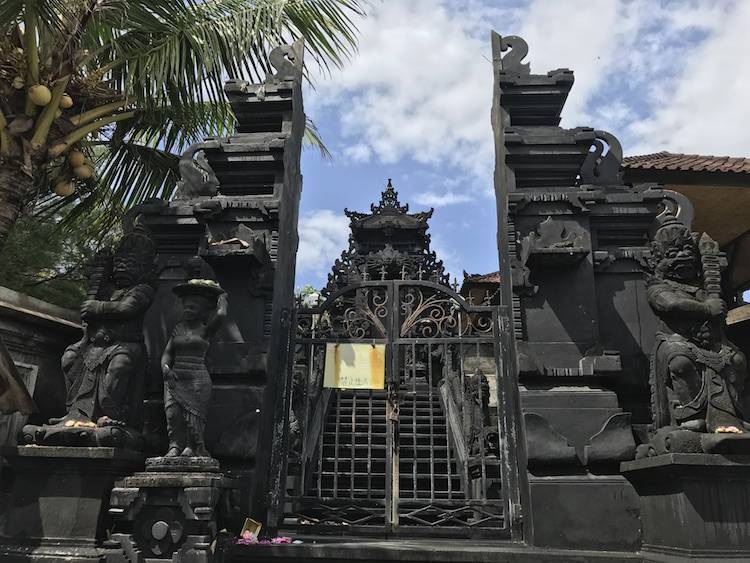 Beware of the traffic on the road approaching the temple during sunset hours, you would need to make sure to be there late afternoon so that you’re not disappointed.

If you do plan to visit during the sunset, don’t miss the Kecak and Fire Dance, a cultural performance which signifies the triumph of the good over evil, performed on an excerpt from the Ramayana.

Another example of a ‘pura segara’, Uluwatu is perhaps the most popular temple in Bali. Located in a picture-perfect background, on the edge of a cliff 70m above the sea, visitors can walk around the temple but access to the central courtyard is closed (they say it opens up during festivals and certain rituals). Similar to the Tanah Lot temple, many people flock here during sunset hours to catch the spectacular scene and the Kecak and Fire Dance. 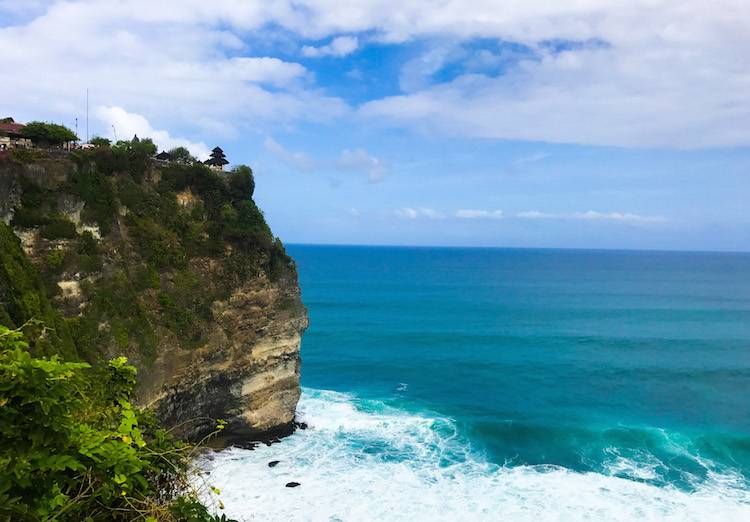 Beware of the wild monkeys, which often snatch personal belongings if they’re hanging lose. These monkeys are traditionally believed to guard the temples from evil spirits and are allowed to roam around freely.

Do enjoy the tranquil walk around the edge of the cliffs for magnificent views of the horizon.

This ‘pura tirta’ or water temple is an Instagram favourite. It is perhaps the toughest to get to, with a 2.5-hour drive from the city centre and 1.5 hours away from Ubud. However, in my opinion, it is the most outstanding temple in Bali owing not only to its majestic setting (by the lake, with the looming hills in the backdrop) but also its interesting architecture. It is not uncommon to see this temple thronged by low-lying fog, which adds to its iconic beauty.

Certainly one of the best temples in Bali, Ulun Danu Beratan temple pays a tribute to Goddess Danu, queen of lakes, rivers and water. It also houses temples for worshipping the Hindu Holy Trinity-  Shiva, Brahma and Vishnu. The immensely calm lake on the banks of which the temple is located, coupled with the mountainous landscape, is what makes this temple a treat to one’s eyes.

If you’re not a fan of the fog and want some clearer pictures of the temple, it’s best to visit this temple during the early hours (before mid-day).

Although you can visit the temple any time of day, if you want to go inside, make sure you go between 8 am- 6 pm or you will be restricted to only the walkway outside.

This temple, contrary to most other temples, is popular to catch the sunrise. However, since it is not accessible easily for the city centre, it might be a good idea to stay in the vicinity if you plan to reach for the sunrise (around 5.45 am).

Also known as the Elephant Cave, this is a popular heritage site located in Ubud.  With an ominous looking face as its entrance, the temple is inside a dark and dingy cave where you can find fragments of Hindu Lord Shiva and his son, Lord Ganesha’s abstract representations. The area surrounding this temple is beautifully green, with a winding, narrow walking path that makes for a lovely stroll amidst tranquil nature. This archaeological site, with the temple and the holy baths, is said to date back to the 11th century. 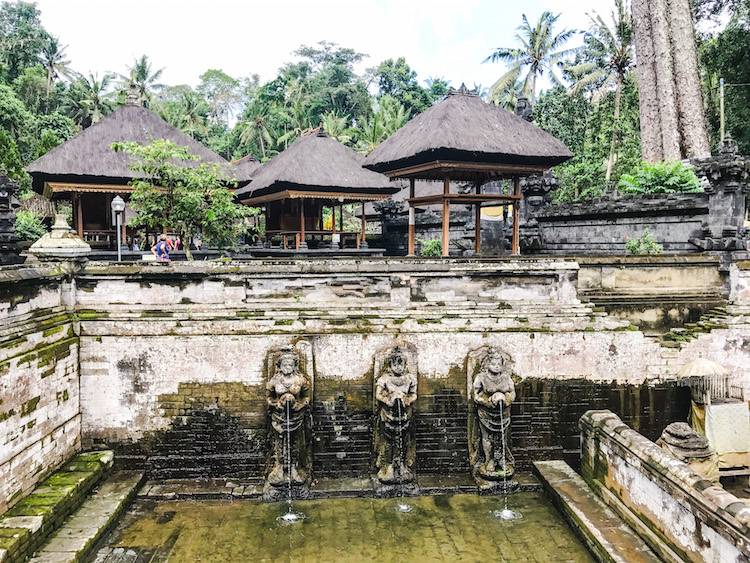 Keep about 2 hours to explore the temple and its surrounding gardens.

A small street market right outside the temple is a good place to strike some good bargains on souvenirs.

As you approach this temple, from an elevated road that winds down towards this hidden little gem amidst looming trees, the views are absolutely breathtaking! The lush green valley is a treat to the eyes and the temple is considered to be one of the oldest in the region. The water temple’s baths boast of fresh water from the springs, so don’t be surprised if you see naked people dipping in them! Unlike Goa Gajah, this temple is far away from the crowds and provides a very tranquil atmosphere with ponds, manicured gardens and blooming lotuses. 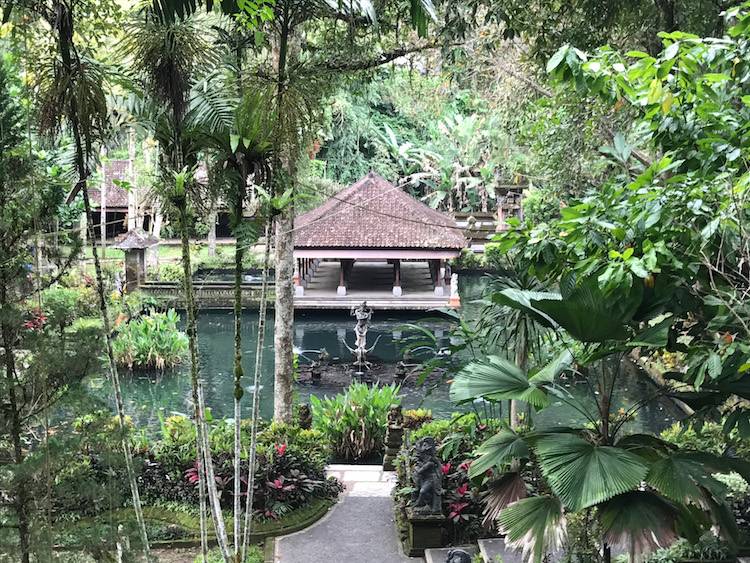 There are two temples with similar names; Gunung Kawi and Gunung Kawi Sebatu. This one being referred to is close to the Teggalang Rice Terraces, in the village of Sebatu.

It is one of the lesser known temples and hence, more remote. Your tour guide/driver might find it slightly hard to understand which temple you’re referring to. You may show it to them on the GPS or it is more commonly known as ‘Pura Tirta Dawa Gunung Kawi Sebatu’. 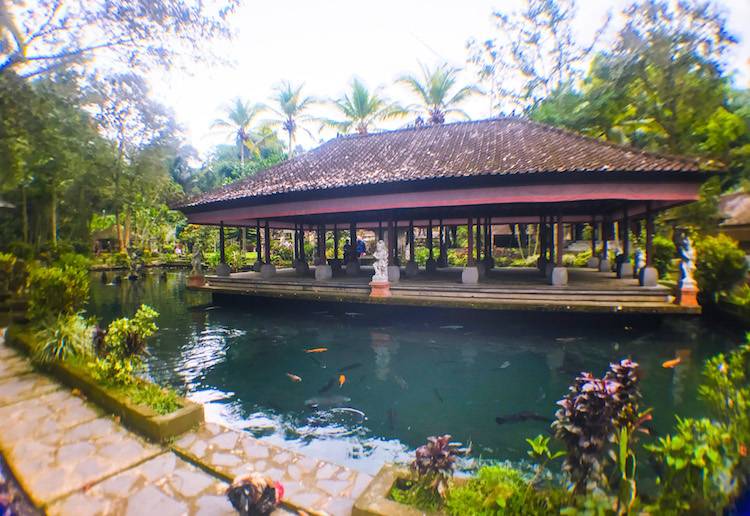 If you are visiting Tanah Lot or any of the best temples in Bali, check out booking.com and Trip Advisor to compare prices on places to stay in Bali. You can also read about the best restaurants in Bali and Bali with Kids.

If you enjoyed Medha’s blog on the best temples in Bali, you might also like to read about Hindu Festivals and Customs on the island of Bali.

Follow me as I travel the world finding the most amazing temples and historical sites along the way. I travel despite several chronic illnesses and also help others to become digital nomads. When I'm not blogging about Europe, Asia and the Middle East you will find me at home in Liverpool with my husband and Blake the Patterdale terrier!
Thanks for subscribing! Please check your email for further instructions.