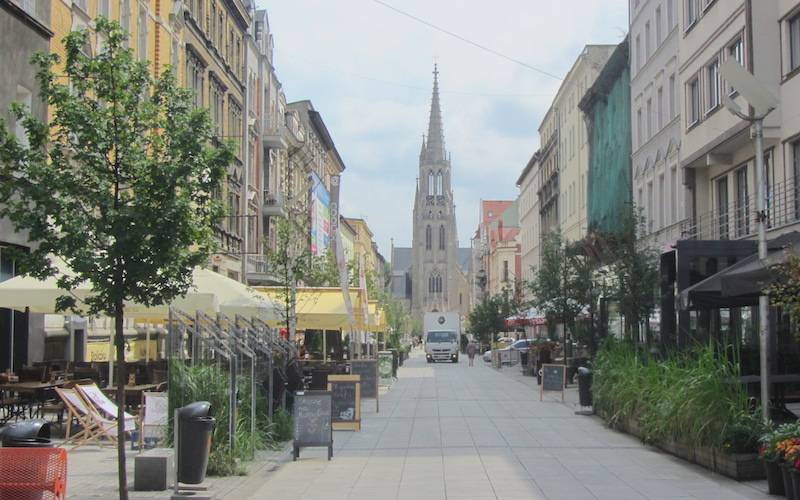 Katowice has always remained in the shadow of Krakow. Yet the UNESCO heritage site of Krakow is becoming more expensive, crowded and even ripping off tourists. Cue Katowice – this industrial town just 70km East of Krakow is increasing its number of tourists on average by over 100,000 per year, therefore Katowice tourism is certainly on the increase. Here are my top things to do in Katowice.

I travelled to Katowice over the Czech border from TBEX Ostrava. I was lucky enough to meet with Mateusz Lisiak, city guide and expert on Katowice tourism (visit his website www.silesiatrip.pl). He explained that Katowice is a city of historical importance. When Poland became independent in 1918, they separated the region four years later. One part in Germany and one in Poland and then this part (Katowice) that had its own autonomical parliament. Decisions made here in Katowice, not in Warsaw (other than international decisions). 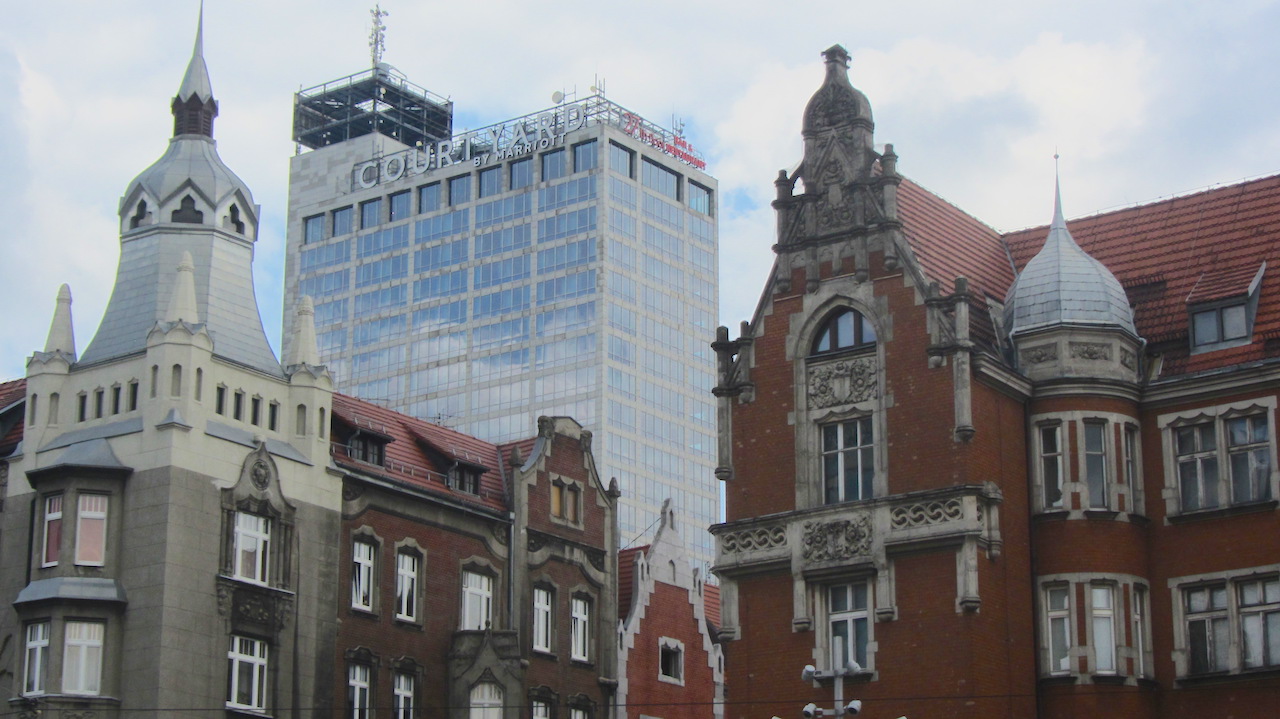 The city of Katowice is approximately 150 years old. It grew from 60,000 to 180,000 people from the first to second World War! Katowice has a strong industrial past, similar to the city of Ostrava. In the industrial prime time, there were 85 coal mines in Katowice! 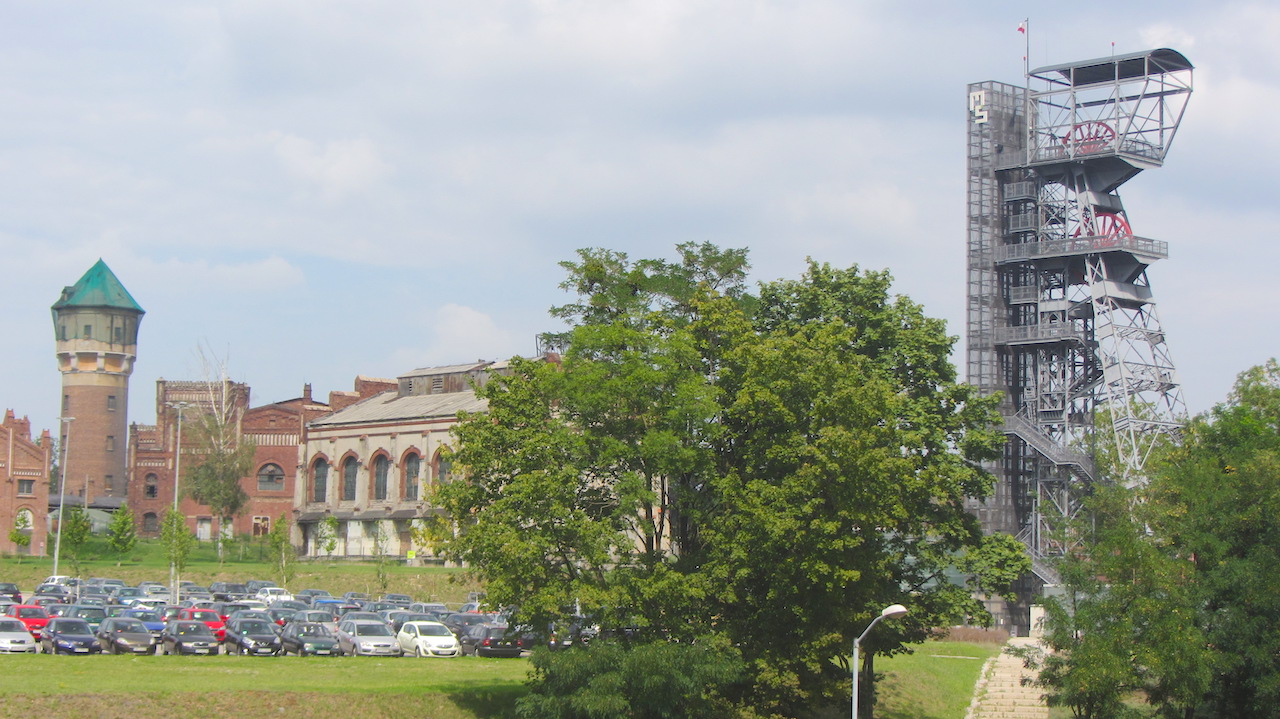 Things to do in Katowice – Visiting Katowice by Foot

The city of Katowice is certainly accessible by foot, although there is an extensive tram network and Uber taxis available to venture further to some of the parks and the old miners community. On foot, you can see the main monuments, buildings and Churches in a day. I spent just 24 hours in Katowice, and whilst I could have stayed an extra day to explore further afield, I certainly got a feel for the place.

Katowice attracts architects who want to see a different kind of architecture to the historical buildings of Krakow – they come to see the communist blocks! 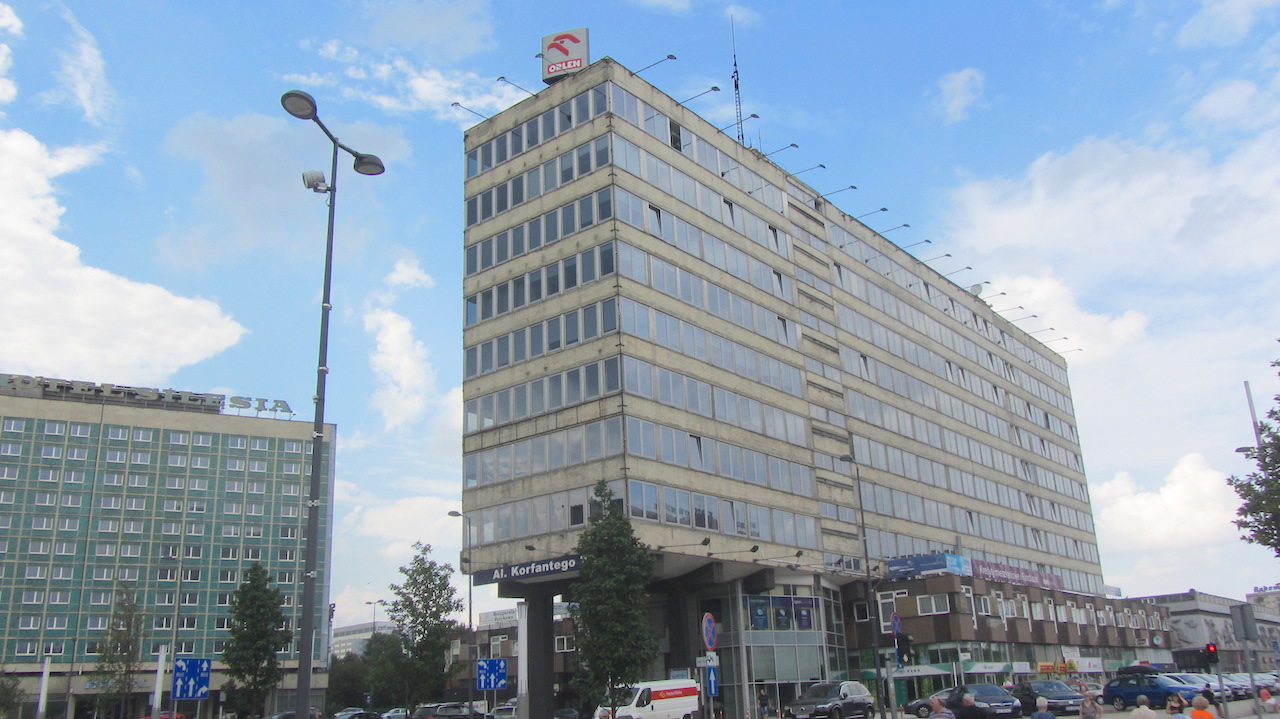 On Korfanteco Street, the original building were destroyed and then made into communist blocks! Check out Hotel Katowice and the ‘Super Building’ opposite to get a feel for life in the communist era.

You might think that Christ the King Cathedral would be the mot beautiful and interesting Cathedral in Katowice. However, this is not the case because it was still getting finished in 1955 when it was still part of Stalingrad (Stalin died in 1953). The communists didn’t want the dome to dominate the skyline of Katowice, and so instead the dome was approximately half the size that it was originally intended to be. 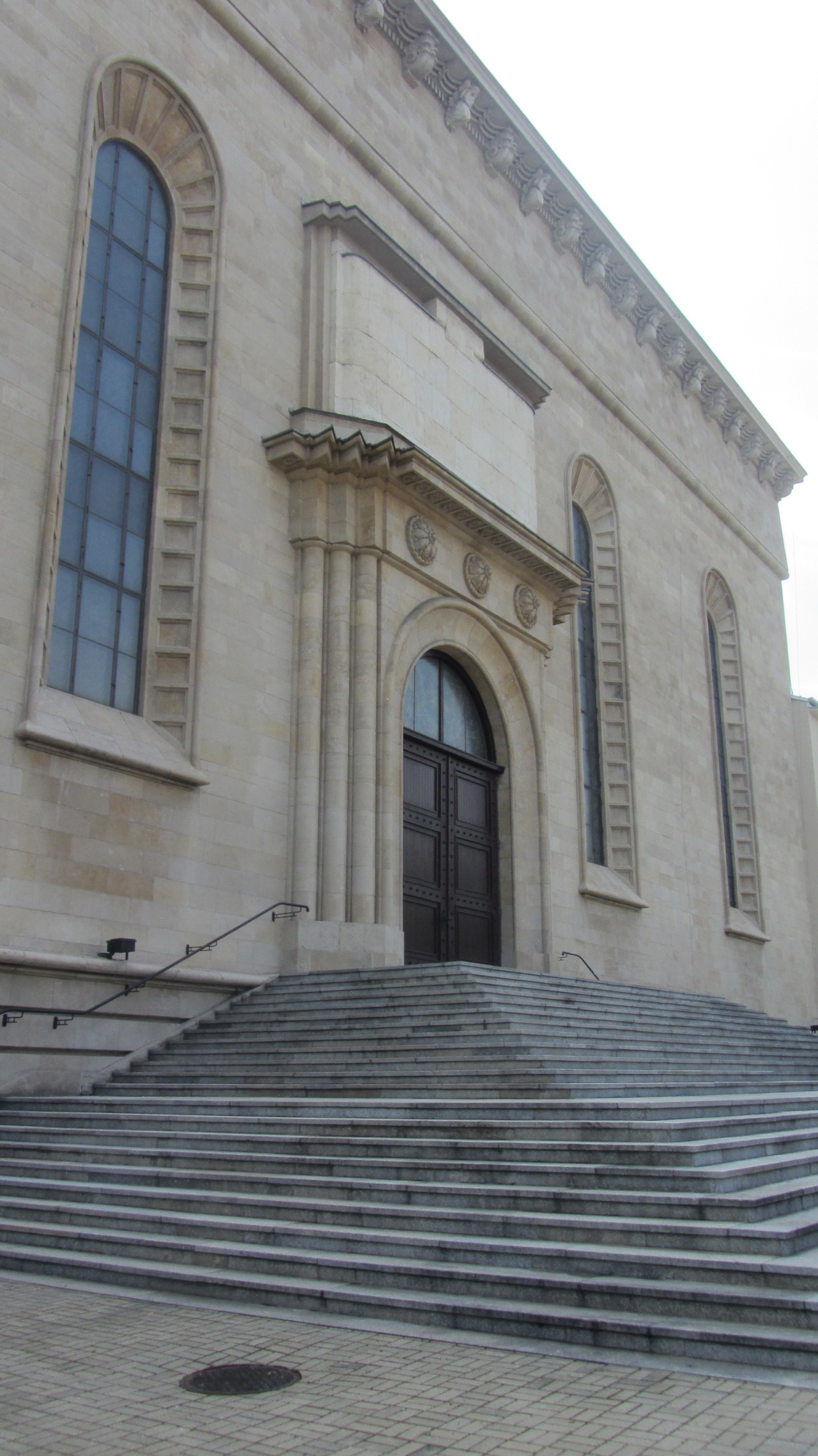 Most churches in Katowice are neo-gothic due to the Prussian influence. One of my favourites was the beautiful Immaculate Conception Church (Kosciol Mariacka) on Mariacka Street. Mariacka street is the ‘student area’ of Katowice and a great place to stop for lunch or a beer! 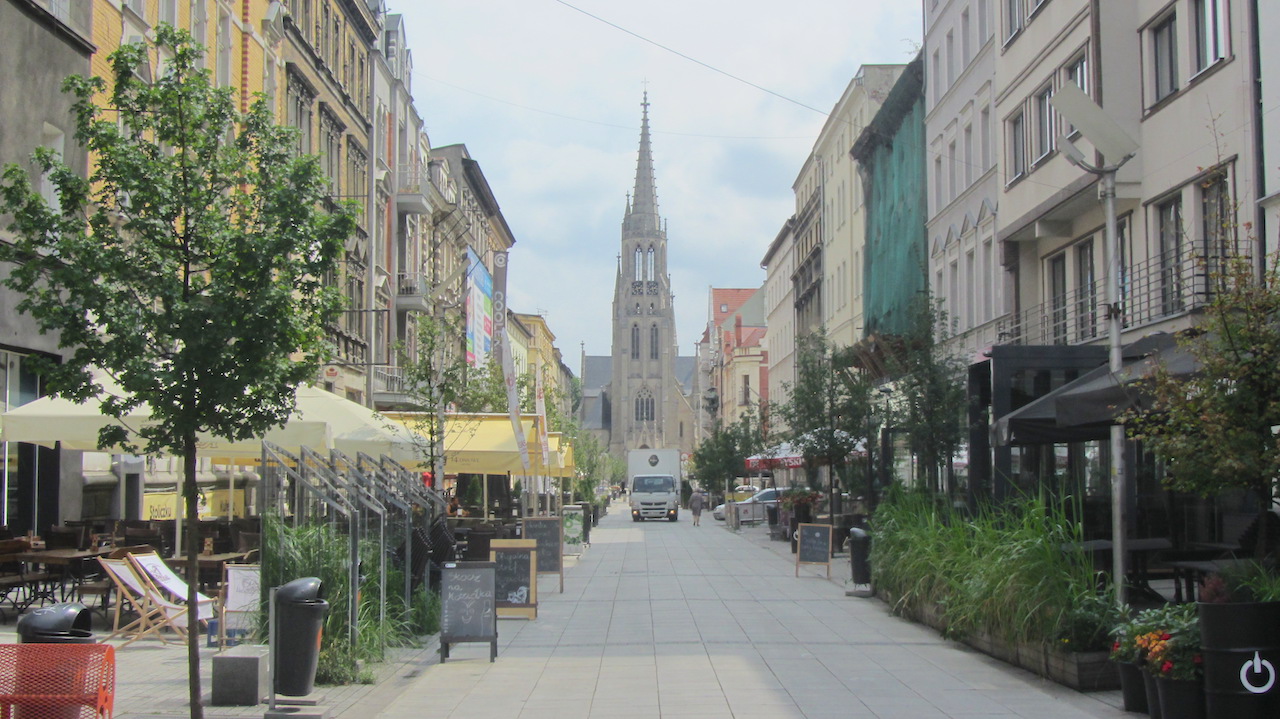 Sadly, both synagogues that used to exist in Katowice were destroyed in 1939. Visit the old school that is built in the same style as the main Synagogue. 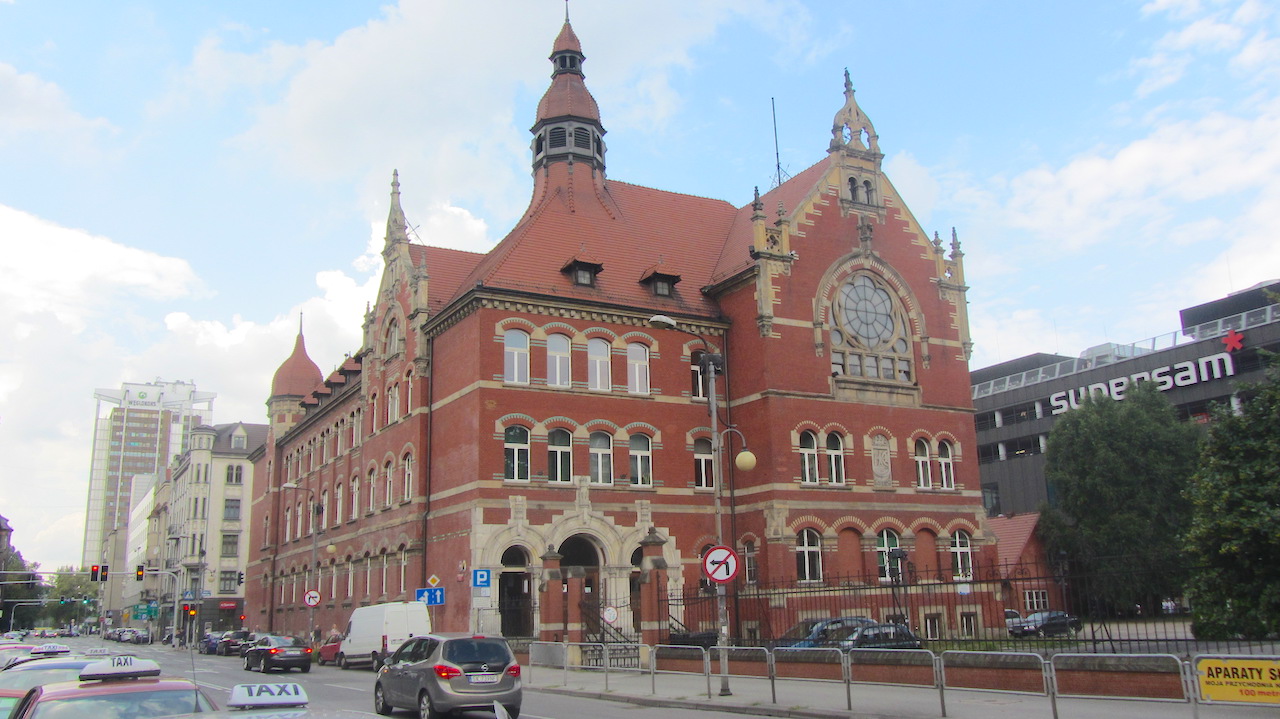 Above is my photo of what the old school building looks like today. Below is the Creative Commons image of the Synagogue intact pre 1939. So sad… 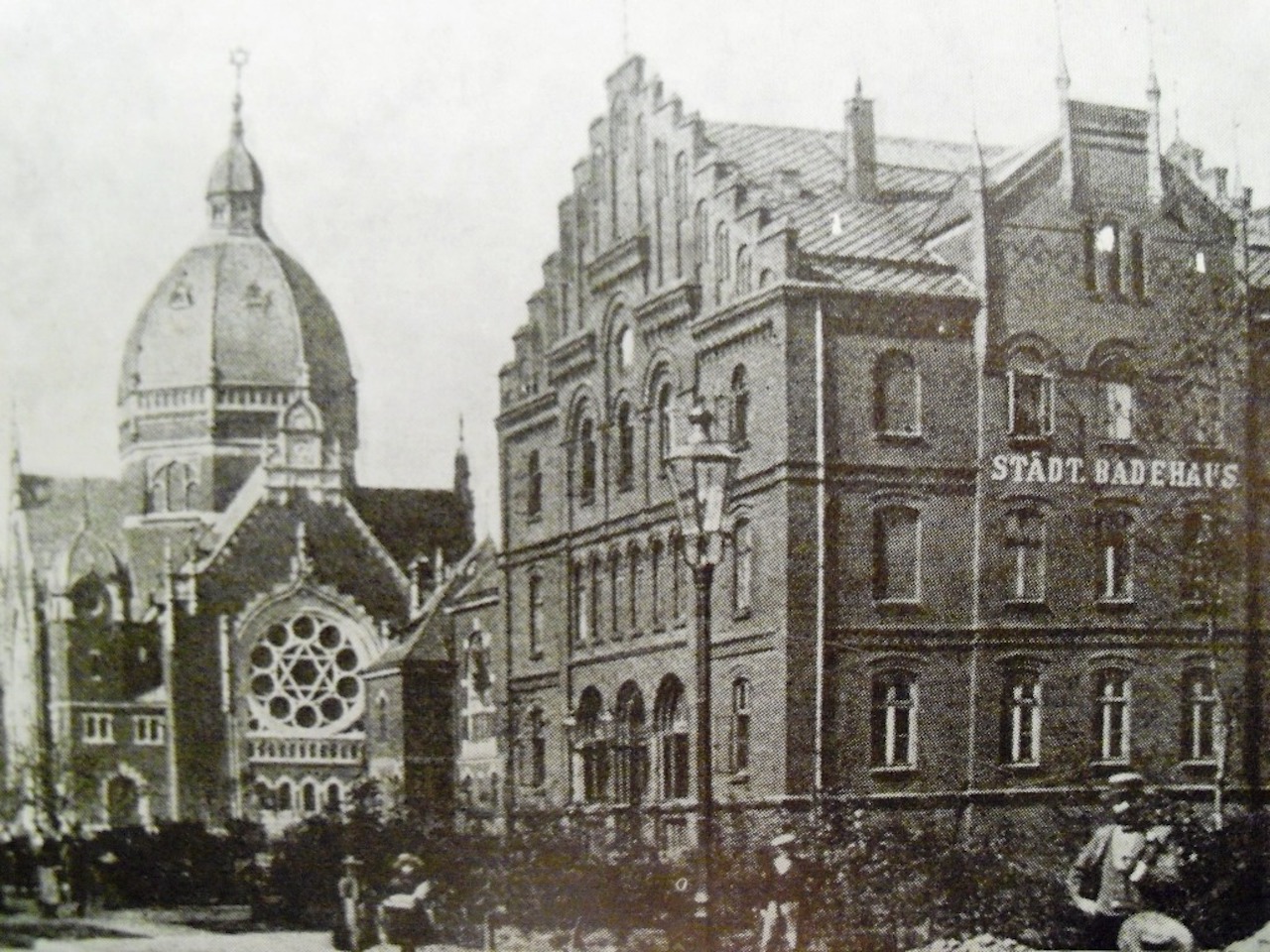 There is a small plaque and monument where the Synagogue used to be. It is worth visiting if you are interested in Jewish history. The plaque says “This memorial is to honour Jews who were killed in 1939-45 by Germans and in this place there was a Synagogue was completely destroyed in September 1939.” 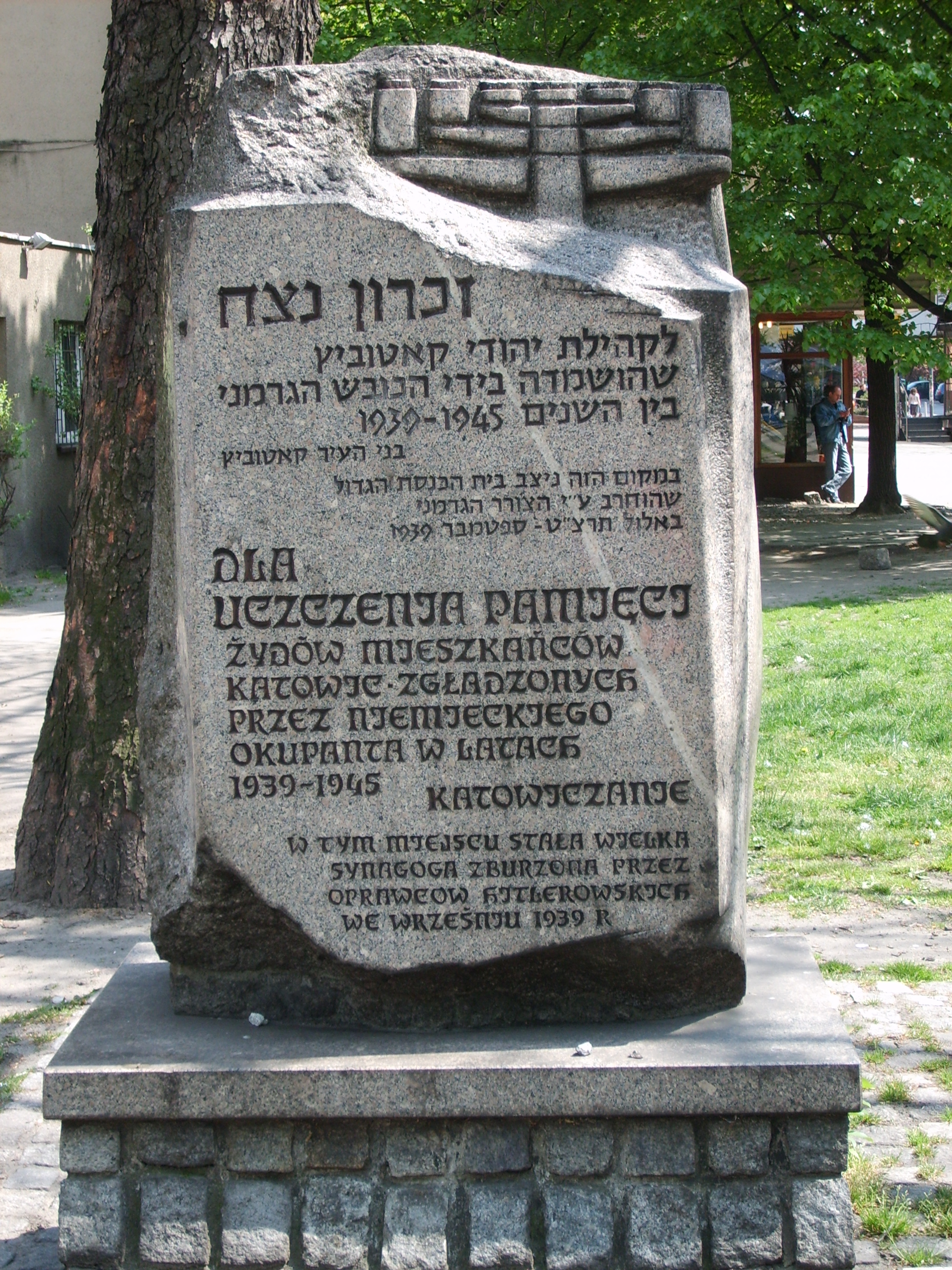 Things to do in Katowice – Monuments

There are two main monuments in Katowice. The first is the Silesian Insurgents’ Monument next to the Spodek (Pomnik Powstancow Slaskich). It is a monument to the insurgents of the three Silesian uprisings against Germany from 1919-1921 (one of which took place in Katowice). 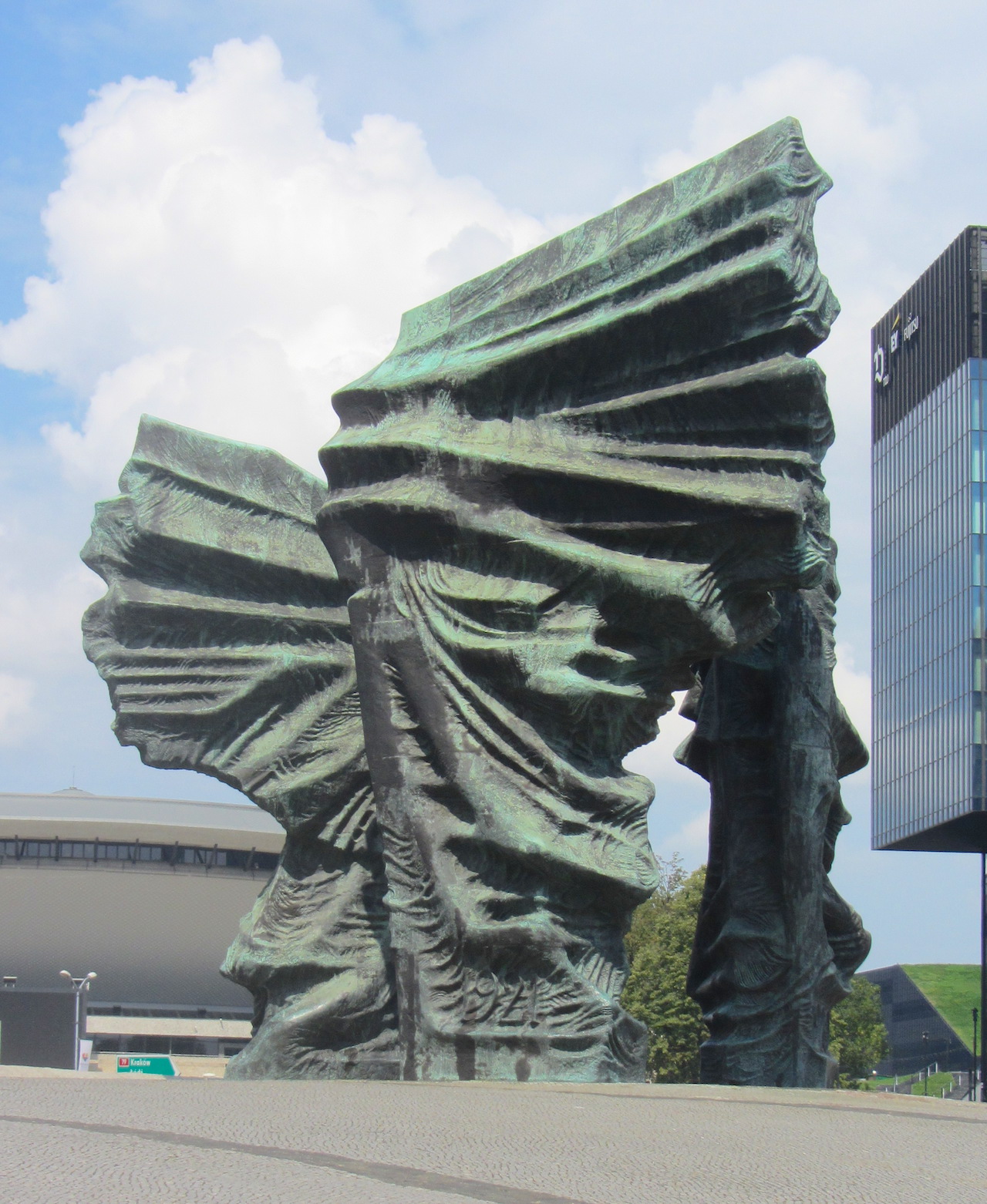 The second main monument in Katowice is the Silesian Scouts monument in the central market square. When the commander of the Polish army retreated to avoid entrapment in 1939, Katowice was left in the hands of the Polish boy and girl scouts. These ill equipped and inexperienced youngsters defended the city for two full days before they died as Martyrs, and this monument commemorates their efforts.

Things to do in Katowice – The Spodek

In Katowice you must see their best modern development within the sporting world – the Spodek. It means ‘saucer’ in Polish and it is exactly that – a disc shaped building that is an all purpose arena. Opened in 1971, the Spodek quickly became a landmark of the city. 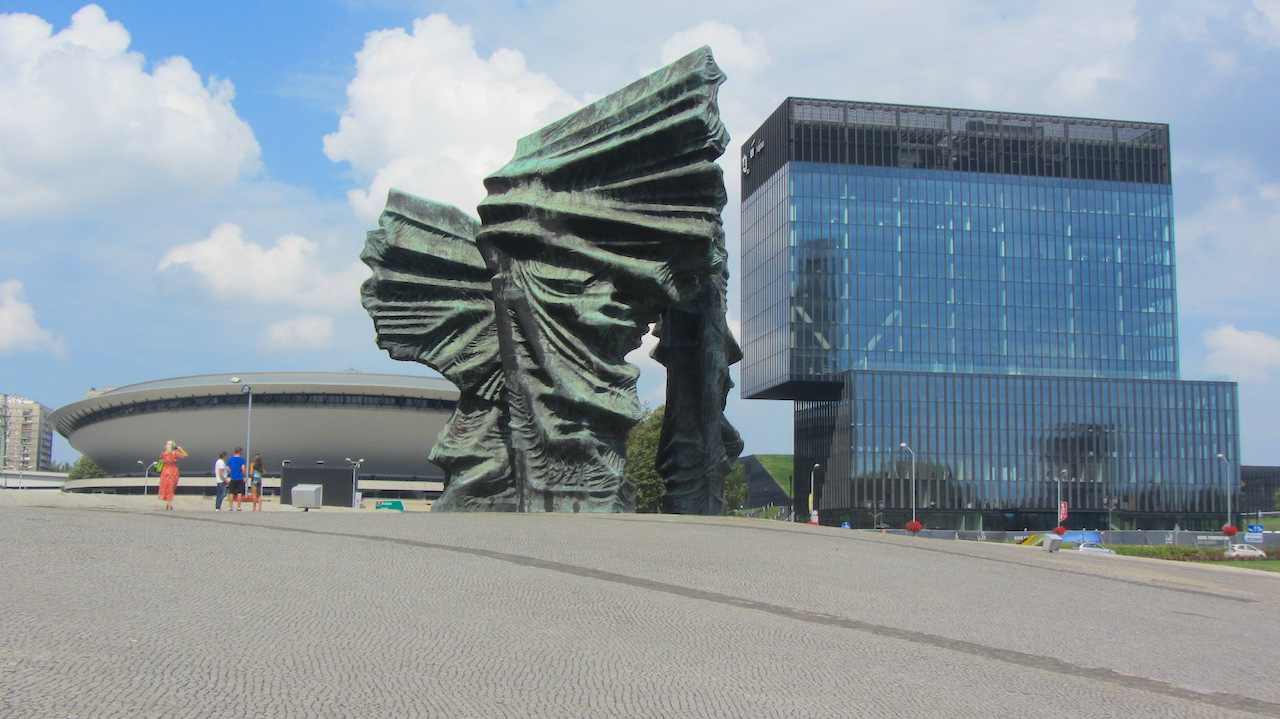 Like something straight out of Peaky Blinders, this historical miners estate now forms a tourist attraction that sees growing numbers year on year. It’s one of the top things to do in Katowice. Take an Uber approximately 15 minutes out of the city to Nikiszoweic and you will find old miners housing built over 100 years ago and a neo Baroque Church built for the miners. 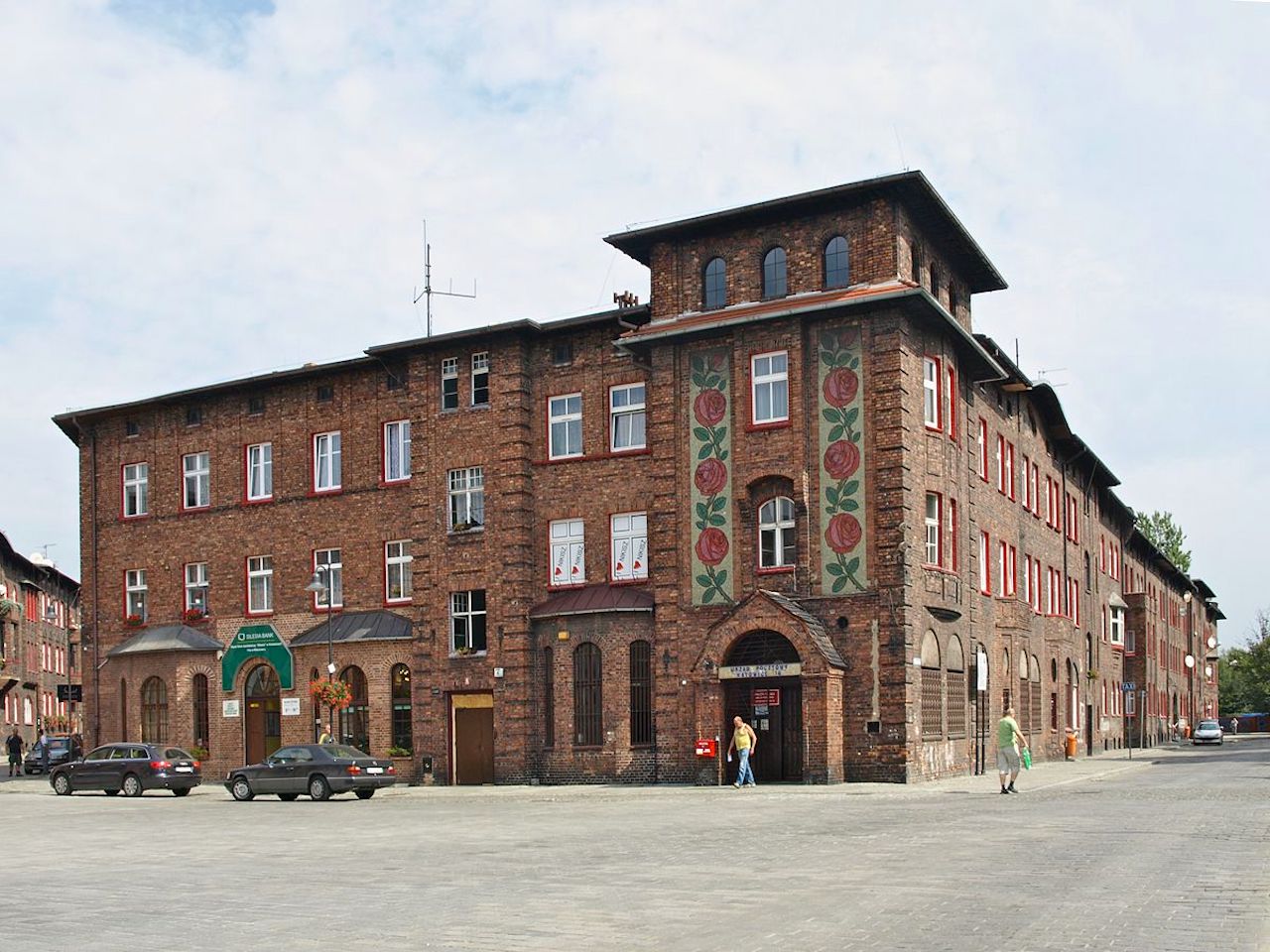 Auschwitz is something that I feel everyone should experience once in their life. It’s not fun, it’s certainly not a tourist attraction, but more of a visit to remember those who lost lives. It’s a trip that allows you to re-assess humanity and face extreme racism head on. Aushwitz-Birkenau is a Nazi Concentration camp that is nowadays a commemorative historical museum. Prepare yourself mentally for this trip, you will see some pretty horrific exhibitions and hear some sickening stories. 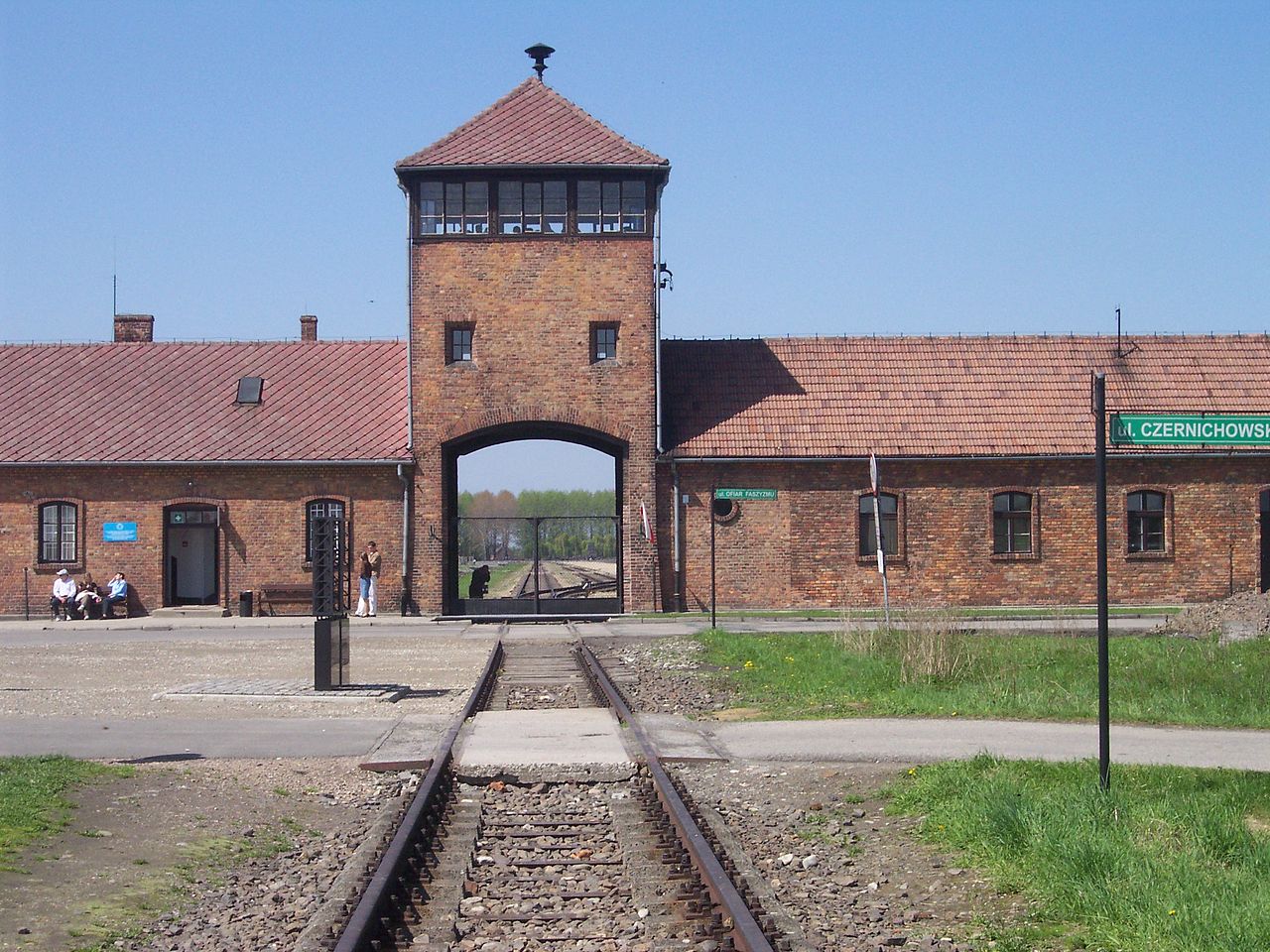 Krakow vs Katowice for Visiting Auschwitz

Auschwitz is located in-between Katowice and Krakow. If you have already visited Krakow, or are looking for a cheaper alternative, it is possible to stay over night in Katowice and travel to Auchwitz as a day trip.

Why Katowice Tourism is on the Increase

The city of Katowice is extremely accessible. You can now fly direct to Katowice from Liverpool, with Wizz Air. Katowice is a cheaper alternative to Krakow and an excellent base for day trips around the Silesia region. Katowice will give you an insight into World War, Communist and Modern Poland through it’s architecture and monuments.

How Long Should you spend in Katowice?

Spend at least a day on things to do in Katowice main city, and add on another day for exploring Nikiszoweic Historical Miners Estate and the urban park. If you intend to visit Auchwitz-Birkenau, add on another day for that. At a push, you can do the main Katowice tourism sites plus Nikiszoweic all in one day if you are happy to get up early, walk a lot and get Ubers. Spend at least a full weekend in katowice. Stay there for a week if Katowice is your base to further explore the region.

If you are interested in cycling, you might want to check out this article on Cycling Poland.

If you are travelling in Central Europe, you might also be interested in visiting Opava or taking the train from Prague to Kutna Hora to discover the Prague Bone Church.

1 thought on “Things to do in Katowice, Poland”