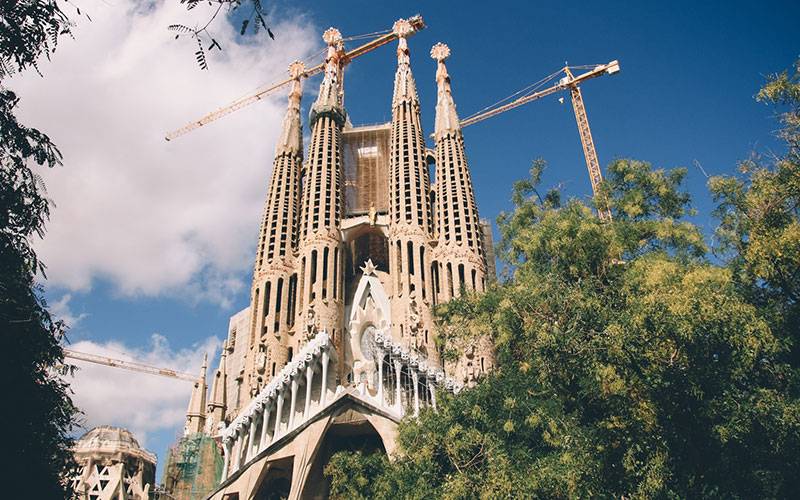 For the last few days, I have been strolling around the amazing city of Barcelona in search of Gaudi’s architecture and art with my American BFF and travel blogging buddy Rachel (Blond Wayfarer). Discovering the art nouveau here in Barcelona has been the highlight of my trip.

I first came to Barcelona over 7 years ago and saw most of the main architectural highlights of Gaudi, but I was travelling on limited time and budget. Coming to Barcelona for the second time has allowed me to travel deeper and go inside some of the amazing buildings here including La Pedrera and Cash Batllo.

The main tip that I would give you is that you should book your tickets to go inside the main attractions such as Park Guell and La Pedrera in advance and plan to arrive slightly early to avoid disappointment. You can book online and in this blog I will include links on how to see these beautiful attractions.

What is Art Nouveau?

Art nouveau is an ornate and ornamental artistic style that developed in Europe between 1890-1910. Unlike Art Deco of the 20s which focuses on straight lines, Art Nouveau centres on curves and is characterised by the use of one single flowing line predominantly in architecture and jewellery but also seen on posters and illustration.

Barcelona was home to one of the most famous Art Nouveau architects in the world – Antonio Gaudi. He built some amazing houses including La Pedrera (Case Mila) and Case Batllo. He also built the colourful Park Guell and Barcelona’s most famous masterpiece – La Sagrada Familia. Barcelona quickly became known as the home of Art Nouveau and Modernism.

This blog offers you a guide through the best art nouveau sites in Barcelona. If you go fast paced and get Ubers or Metro with fast paced walking, then you can see most of these in about 3 days. However, I recommend that you stay for much longer to take it slow and appreciate the art, and then enjoy the rest of the city.

La Sagrada Familia is the gothic style Roman Catholic Basilica of Barcelona, designed by Gaudi. Construction is still underway on La Sagrada Familia and is set to be completed by the 100 year anniversary of Gaudi’s death (2026).

You simply have to go inside La Sagrada Familia – it is the most impressive thing that I paid for in Barcelona. However, I was in awe of the design, particularly due to the way that the stained glass windows project the color inside the Basilica. It is not to be missed.

The cost to enter La Sagrada Familia is €15 without a guide or €19.50 with. It is not really necessary to have a guide – you can learn a great deal from the signs and videos inside the Basilica. There is the option of an audio guide also at €19.50 if you prefer to go at your own pace.

It is important that you book your advance tickets online, in order to avoid wait times of up to two hours. Book early tickets if possible, because then you will be able to appreciate powerful sunlight beaming through the multi-colored stained glass windows.

Definitely don’t go later than 5 pm if possible, especially in winter months. If it is dark outside, you certainly won’t be able to appreciate the full effect of what Gaudi was aiming to achieve.

How to get there: Metro purple line to Sagrada Familia

Park Guell, to the North of the city, was designed by Gaudi as a residency or estate for the wealthy Catalonians and expats of Barcelona. Unfortunately, only 2 out of the 60 planned residences were constructed. However, it remains one of the most beautiful spots in Barcelona. Book online in advance and go early.

It is an absolute pleasure to stroll around this beautiful park and enjoy Gaudi’s design. In the free part of the park, you can see Gaudi’s raised footbridge and Casa Museu Gaudi, where Gaudi spent the last 20 years of his life.

Observe the Hansel and Gretel style houses at the gates (below) and enter the monumental part of Park Guell to see Gaudi’s trademark mosaic salamander (above).The main entrance to Park Guell

The stairs either side of the temple will take you to a raised platform that doubles up as a water filtration system, and is also beautifully decorated with mosaic tiling.Above all, I loved this place so much, that I have dedicated a whole separate blog to it. Read my Park Guell blog here.

How to get there: Metro green line to Lesseps/Vallcarca or by bus to Carretera del Carmel-Park Güell

Casa Mila and Casa Batllo are two beautiful Gaudi inspired houses. They are fine examples of Gaudi’s architecture and cost nothing to view from the outside. However, both of these were commissioned to be residencies by wealthy Barcelona entrepreneurs.

Casa Mila (above) known as ‘La Pedrera’ and was Gaudi’s last piece of architectural design from 1906-1910. It may surprise you to know that during the time of Casa Mila’s construction. Thee other residents of the street were not happy, because the curved art nouveau style was completely out of the norm.

The closest Metro station is Diagonal.  You can go inside for €25. Student, disabled and local resident discounts are available.

How to get there: Metro (green line) to Diagonal

Further down Passeig de Gracia, you will come to Casa Batllo, a colorful architectural masterpiece. it is sometimes known as the house of bones (casa dels ossos), due to its skeletal qualities. Above the ground floor of irregular windows, you can see the curved balconies that demonstrate Gaudi’s avoidance of straight lines. At the top, it has a ‘dragon-back’ style mosaic roof.

On my first visit to Barcelona, we were lucky enough to see Casa Batllo at night when it was all lit up. This time I actually went inside!

It costs €21.50 per ticket to go inside, and discounts are available (students, disabled, seniors, local residents). It is advisable to book online in advance, and you can book here.

How to get there: Take the Metro to Passeig de Gràcia

I had an amazing bike tour of the city of Barcelona (courtesy of Baja Bikes) and we cycled through the beautiful Park de la Cuitadella. The Cascada Fountain was designed by Joseph Fontsere, with Gaudi as his assistant. The focal point is the golden statue of aurora riding on four horses. This is surrounded by water-spouts and stone clams and dragons.

How to get there: Take the Metro to El Born – Ciutadella – Zoo

One of the most important pieces of Art Nouveau in Barcelona is Casa Vicens. It is highly significant as it was the first house designed by Gaudi – it proceeded both Casa Mila and Casa Batllo. Casa Vicens has undergone extensive renovation and was only opened to the public as a museum in 2017.

This stunning hotch pitch of colours and styles formed a summer house for the Vicens family to get out of the city. Of course in the time it was built, Gracia was a village on the outskirts of Barcelona. Central Barcelona at this time was just the Gothic Quarter and it was without sewers – overcrowded and unhygeinic. Casa Vicens made the perfect escape for the family.

Highlights of Casa Vicens include the colourful facade, ceilings lined with paper mache ivy and an Arabic style room inspired by the Alhambra Palace in Grenada.

How to get there: Take the Metro (Green L3) to Fontana

One of the most outstanding examples of art nouveau in Barcelona is rather unexpected. It is not a house, or a Church, but a hospital. Sant Pau hospital was built in the nineteenth Century at the height of the transformation of the city of Barcelona and substantial medical advancement. The building of this art nouveau hospital was made possible by the the legacy of the banker Pau Gil in 1902. Sant Pau hospital was built between 1901 and 1930 and is one of the most prominent works of the Catalan modernisme architect Lluís Domènech I Montaner.

The hospital contains 5 independent buildings with stunning art nouveau facades. The domes and the internal halls are beautifully lined with colourful tiles. The stained glass windows are some of the most exquisite in Barcelona.

Although the hospital is no longer in operation (a new one had to be built to move forward with medical advances and hygiene requirements) they have cleverly projected images of doctors dealing with patients and porters wheeling wheelchairs onto the walls of the main building to give you a sense of what it was like at the height of Sant Pau as a fully functional 19th Century hospital. There are also Museu, displays where you can see and learn about 19th Century hospital equipment including old stethoscopes and inhalers.

How to get there: Take the Metro to Guinardó (yellow line 4) or you can also walk there from La Sagrada Familia

A final and less well known example of art nouveau in Barcelona is Palau Music – an impressive music hall that is the epitome of Catalan Modernisme. Palau Musica was built from 1905 – 1908 by modernist architect Lluís Domènech i Montaner as a home for the Orfeó Català. It was declared a World Heritage UNESCO site in 1997. The most striking feature of the Music Palace is the concert auditorium’s colourful central skylight.

How to get there: Take the Metro to Urquinaona Station (L1 Red and L4 Yellow)

What did you love most about Art Nouveau in Barcelona?

I loved the curves and Mosaic tiles of Park Guell and also the rooftop of Case Mile with the house guardians (that often get mistaken for chimneys! Of course most day trips were followed up by phenomenal tapas and red wine which is out of this world in Barcelona.

What did you love most about Art Nouveau in Barcelona? I’d love to hear – please leave a comment on my blog!

The art nouveau in Barcelona is just one of the things that makes Barcelona an absolutely fabulous place to travel. Whether you travel alone or with friends or family, you will be astounded at what this city has to offer.

Above all, If you want to hear more about Barcelona, you can read my blog on Barcelona Top Travel Tips. If you are looking for a place to stay, I highly recommend Sweet Home Abroad.

Additionally, For those of you eager for more Gaudi, head over to Globotreks for their
10 Must see Gaudi Buildings in Barcelona.