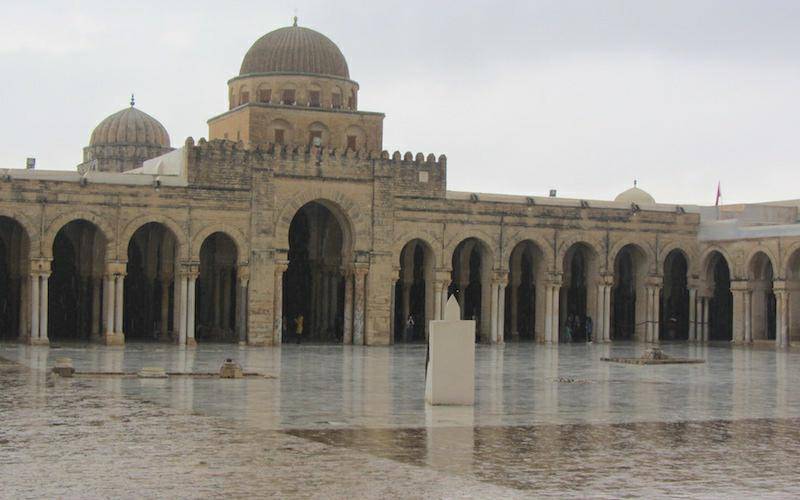 If you are travelling to Tunisia for religion and culture, don’t miss the Kairouan great Mosque, which is the oldest Mosque in North Africa. The trip is doable as a day trip from most tourist resorts including Hammamet, Sousse and Monastir. Combine it with a visit to the Zaouia of Sidi Sahab to experience beautiful Islamic geometric mosaics and tomb of a close friend of the Prophet Mohammad (Peace be upon him).

Tourists are allowed inside the Mosque courtyard. However, non-Muslims should not enter the main Mosque as prayer will be taking place and should not be photographed or disturbed. From the corner near the minaret, you can have an excellent view of both domes of the main Mosque above.

Now, look carefully at the pillars supporting the Mosque structure – they come from ancient Roman sites. There are 9 gates (Babs) around its perimeter that exceeds 400 metres. Originally founded in 670, the Mosque has been rebuilt several times throughout history. The current version includes a dome that was added in the 13th century.

Irrigation at the Kairouan Grand Mosque

The Kairouan Grand Mosque has such a well-designed irrigation system that it collects water for ‘Wudu’, the ritual washing before prayer for Muslims.

In the centre of the courtyard is a horizontal sundial – you can climb the stairs to reach it.

If you look carefully at the architecture, there are two more places on the Mosque that used to have sundials, but sadly, these are no longer there…

The Minaret is three stories and stands at 32m high. Minarets were originally built so that the muezzin (crier) could broadcast the call to prayer from a great height to reach members of the Muslim community. Although these days loudspeakers can be used for the call to prayer, the Minaret remains a crucial part of Islamic architecture.

Inside the Kairouan Grand Mosque

Non-Muslims are not allowed to enter the Mosque itself (only the courtyard). However, there is an open arch where visitors can view inside to see the beautiful carpets, chandeliers and internal Roman pillars.

Another of the top attractions of the sacred city of Kairouan is the Zaouia of Sidi Sahab. This 17th Century complex comprises of a Mosque with a minaret, madrasa (Qu’aranic school) and mausoleum.

The Courtyard and Minaret

As you enter the first courtyard of Zaouia of Sidi Sahab, you will be greeted by authentically blue washed Arabic style arches. This place is still relatively undiscovered by the mass tourism of Sousse kasbah and Carthage, and so if you go early, you will experience a small presence of locals.

The minaret serves the purpose of allowing the muezzin to ‘call to prayer’ which occurs five times daily in Islam.

Inside the house and old Qu’ranic school, you will see the ornately tiled walls and decorated ceilings. Geometric shapes and calligraphy reflect the Islamic style of art.

Every wall has beautiful tiles and every door is elaborately carved…

A close up of some of the wall tiles…

The next lavish archway leads to the Mosque courtyard…

Once you enter the Mosque courtyard, you can see prayer mats at the ready…

Abou Djama el Balaoui, one of Mohammed’s companions is buried on the site of the Mosque, and therefore Kairouan is a popular place of Islamic pilgrimage.

The public is not allowed to enter the mausoleum itself. There will often be a man sitting at the entrance of the tomb, and he will go in and take photos of the inside if you tip him!

As you can see, the ceilings of the inside of the Mausoleum are stunning.

There is a stunning view of the Mosque dome from the Mausoleum. Like at the Kairouan Grand Mosque, only Muslims are allowed inside the Mosque itself. Tradition says that Abou Djama el Balaoui always carried three hairs from the Prophet’s beard with him. Therefore the zaouia is often referred to as the Barber’s Mosque.

A second tomb is located to the left of the main Mausoleum and this is where the architect of the complex is buried.

1 thought on “Kairouan Great Mosque and Zaouia of Sidi Sahab”