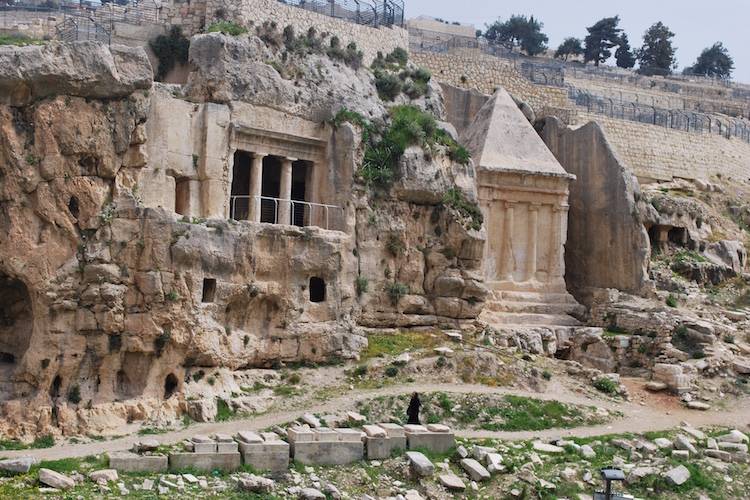 From the Mount of Olives, I walked towards the city wall of Jerusalem, but saw something interesting carved into the cliffs in a valley beneath. I decided to explore, and before I knew it, I was in the depths of Kidron Valley that is mentioned in the Bible. So, why are the Kidron Valley Tombs so important?

The Kidron Valley – Historically important for the Christian and Jewish faiths

The Bible mentions the King’s Valley in Genesis 14 (Old Testament) as the place where Abraham met Melchizedek the King of Salem. It is also mentioned in 2 Samuel 18 as the place where King David’s son Absalom set up a pillar to immortalize himself.

Absalom’s Pillar is probably the most famous of the Kidron Valley Tombs. It is stated in 2 Samuel 18:18:

“Now Absalom in his lifetime had taken and reared up for himself a pillar, which is in the King’s dale: for he said, I have no son to keep my name in remembrance, and he called the pillar after his own name: and it is called unto this day, Absalom’s place.” (2 Samuel 18:18)

Popular Jewish tradition claims that this is the pillar of Absalom, son of David. However, it is apparently the tomb of a rich Jerusalemite from the end of the second temple period. The height of the tomb is approximately 20 metres.

The style of Absalom’s pillar implies that it was constructed in the first Century. It combined Egyptian and Hellenistic influences, but without the depiction of human figures.

Absalom’s tomb is constructed in two sections. The first is the lower square shaped section that has been wholly dug from the rock. The second part is the circular shape built on top. This separation indicates the separation of the body and soul.

Near Absalom’s pillar, no Jews were buried, because the Jews of Jerusalem preferred not to be laid to rest alongside the tomb of someone known for raising his hand against his father (if it was King David’s son).

The Cave of Jehoshaphat

To the North side of Absalom’s pillar another burial cave was discovered with a set of tombs belonging to a prosperous family of the second temple period. Popular Jewish tradition considers this to be the burial place of Jehoshaphat, King of Judah, although scripture specifies that he was laid to rest in the City of David.

The Tomb of Benei Hezir

The tomb of Benei Hezir is a family burial cave dating back to the start of the 1st Century BCE (Before the Common Era). The front of the cave is carved into the rock and two pillars are crowned with Doric Capitals (the oldest and most recognisable Greek tip of a pillar in architecture).

Between the two columns, a carved inscription reads:

The Hazirs were a wealthy family in the Hasmonean dynasty and they are also mentioned in scripture (1 Chronicles 24:15).

The Tomb of Zechariah

The tomb of Zechariah takes the form of a pyramid carved into the rock and dates back to the Second Temple period. There is no grave inside – it is a cenotaph indicating that a grave is nearby. It is decorated in an Ionic style (one of the three classical orders of classical architecture along with the Doric and Corinthian) and above them is an Egyptian style cornice.

It is possible to visit the Valley in just two hours. It’s fine to go there without a guide – the entrance to the Kings Promenade has a tourist information booth where you can pick up literature. Remember that it can get very hot in summer during the heat of the day (11am-3am). Also be sure to wear comfortable shoes as there is a fair bit of walking involved – walking boots are the most ideal.

Where to stay when visiting the Kidron Valley

If you are looking for somewhere to stay, I recommend Abraham’s Hostel for a digital nomad or low budget traveller and Hotel Dan Boutique Jerusalem for a four star experience.

Most people arrive in Jerusalem by bus to the central bus station. It is possible to jump on the metro to get to the Old City. You can get a taxi, but cabs can be expensive in Jerusalem.

If you are staying in Jerusalem, you might also like to read about The City of David and The Mount of Olives.

3 thoughts on “Ancient Tombs of the Kidron Valley”