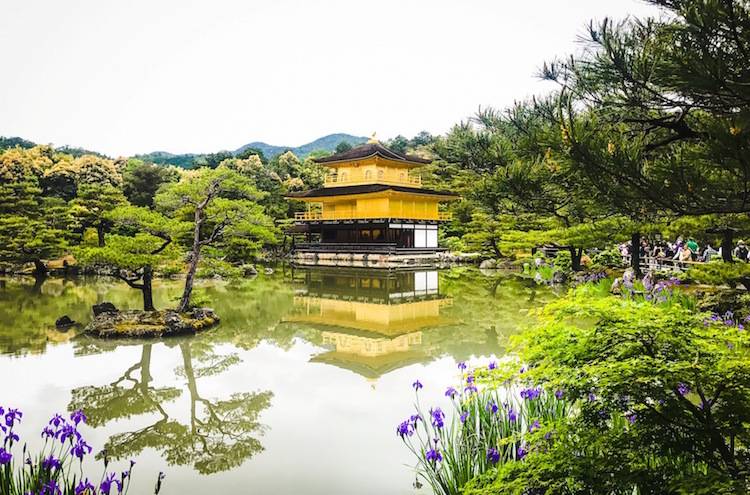 *Today’s guest post on shrines in Japan (and photography) is by Medha Verma from www.hoppingfeet.com.

Home to several thousands of worship places, Japan has a wealth of religious architecture, and short listing the ones to visit in a limited period of time can be a difficult and overwhelming task. Every village or town has their local shrine or temple and many of these are set amidst lush gardens or open spaces, providing a very tranquil escape from the noisy and bustling streets.  Some of the best shrines in Japan in terms of their architectural genius, inventive design and perfectly manicured and peaceful gardens can be found in Tokyo, Kyoto, Nara and Kamakura.

What’s the Difference between a Temple and a Shrine?

Firstly, it is very important to understand the difference between a temple, shrine and pagoda, the three most common forms of worship places you’ll come across in Japan. Temples, usually suffixed with ‘ji’ in their name, are the place of worship for the followers of Buddhism. They ideally house a statue or image of Buddha and have an incense burner in the main hall, which is also the place for prayers. Temples usually have a pagoda in the vicinity, which is often a 3 or 5-storied building, housing the remains of Buddha.

Shrines, on the other hand, are where Shintoism is practiced, an ancient religion that believes that ‘spirits’ live in natural places and hence they worship the forces of nature. The entrance to a shrine is marked by a special archway called Torii, which separates the sacred world from the outside with a pair dogs or lions guard the entrance. You will often find a purification fountain to cleanse your hands and mouth before the prayers.

Although Buddhism is common in Asia, Shintoism is hardly practiced outside of Japan. It is also said that many Japanese practice both religions as they are compatible and non-contradictory to each other. Whereas most temples shut in the evening before sunset hours, shrines remain open through the day. Here are some of the best temples and shrines to visit whilst in Japan, including Senso-Ji and Itukushima.

The Best Temples and Shrines in Japan

Why: For the thousands of red coloured torii gates, that are placed one after the other, forming a pathway to walk through all the way to the mountain top. These popularly photographed gates are said to be donations made by people who found success in their lives after worshipping at the Fushimi Inari shrine. If you look closely, you can see the names of these donors on each of the gates, which are much larger at the beginning of the trail and begin to get smaller and stacked up more closely (known as Senbon Torii) as you go further along.

Why: For the floating torii gate in the middle of the sea, during high tide, and also the shrine itself which is built on stilts, over the water. The five-storied pagoda in the vicinity of this shrine is a treat for the eyes and the island itself with its laid back vibe, delicious local sweets, freely roaming wild deer and hundreds of souvenir shops, is a must-visit. Itsukushima is one of the most amazing and memorable shrines in Japan.

Why: For the humungous bronze statue of Buddha which has often been written about by famous poets in the past. The green colour of the tarnished surface of the Great Buddha, exposed to elements over a period of time, only adds to its majestic appearance.

Why: For the tall and stunning red gate which is the entrance to the temple and has bulky lamps hanging from it, creating a larger-than-life image. The figure lights up beautifully at night, making the Sonso-ji Temple worth visiting after sunset.

Compare hotel prices in Tokyo on booking.com, hotels.com and Agoda.

Why: Although this temple is best visited during the cherry blossom season when it is engulfed with pink and white flowers, the spectacular view of the city from its main hall, perched on an elevated platform, can be enjoyed any time of the year.

Compare hotel prices in Kyoto with Hotels.com, booking.com and Agoda.

Why: Surrounded by hundreds of free-roaming wild deer, this temple is one of the oldest and historically significant temples in Japan and houses one of the largest bronze statues of Buddha. The impressive architecture dates way back to the 8th century and the main hall or the Daibutsu-den is said to be the largest wooden building in the world!

Why: Hundreds of small statues of Buddha located on the path leading up to the main hall where a massive golden image greets you, this temple with its little ponds, stairways surrounded by lush green bushes and pink flowers (hydrangeas in June-July)and tall bamboo trees is located at an elevation, offering delightful views of the ocean.

Why: For the bright golden building (also called Golden Pavilion) located in the middle of the pond providing a brilliant reflection of the surrounding green trees and bushes along with this architectural marvel. Lovely purple flowers during the spring add to the picturesque scene, though its often crowded making it difficult to click a good picture.

Why: For a break from the busy and crowded streets of Tokyo. Located in the middle of one of the trendiest streets, this shrine is surrounded by a large forested area which breaks away from the clutter. It’s almost as if when you enter the tori gate, you leave the noisy chaos behind and are transported into a unruffled world, far far away!

Compare prices for hotels in Tokyo.

Why: For the perfectly manicured and tranquil Zen garden that surrounds this lovely temple. A walk through the lush green trees, fish-filled ponds and lovely pink flowers is a treat to the soul. The natural beauty and quiet surroundings make for this to be the perfect place to just relax and rejuvenate in Kyoto.

Why: One of the top places to visit in Naha, Okinawa is Naminoue Beach, a stretch of white sand and crystal blue waters near the heart of the city. Towering over this popular beach destination, dotted with sun-worshippers, is the most important Shinto shrine in Naha. Set on a bluff facing the sea, Naminoue Shrine was built in 1890 on top of a Ryukuyuan temple dedicated to Nirai Kanai, the mythical land of the gods believed to lie beyond the horizon. Today, Naminoue Shrine continues to be spiritually important to Okinawans and consists of a main hall, a worship area and several smaller shrines.

Want to read more on Japan? Check out the best day tours from Osaka and this easy Kyoto 4 day itinerary! Also if you are a first timer, check out this guide to first time travel to Japan.

1 thought on “Exploring the Temples and Shrines of Japan”