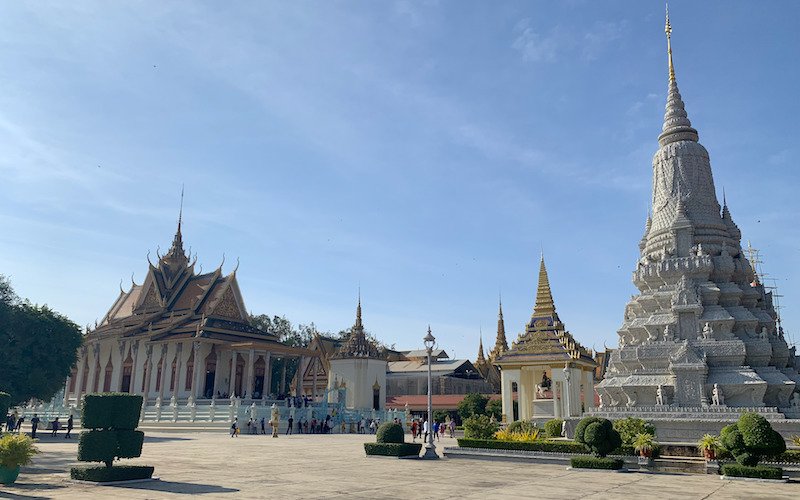 The Royal Palace of Phnom Penh is a must for any visitor to Cambodia’s capital city. The palace was constructed in 1866 as a place of residence for the King shortly after King Norodom relocated the capital from Oudong to Phnom Penh. the Royal Palace is one of the most famous landmarks of Cambodia after Angkor Wat and is the best example of Khmer architecture in the capital. The Phnom Penh Royal palace is included in most Phnom Penh tours of the city, but it is easy to do independently.

How to Dress for the Phnom Penh Royal Palace

Dressing conservatively is VITAL for the Phnom Penh Royal Palace – they are extremely strict about this, more so than the Grand Palace in Bangkok. Do not wear shorts, vest tops, short dresses or skirts – you will be REFUSED entry.

You are also NOT allowed hats or head coverings in the Royal Palace – if you have a cap on you will be asked to remove it as it will not be allowed inside the Viharas (Buddhist temples), but it’s ok to keep it in your bag and wear in the gardens (the sun will be hot!).

I thought I was dressing conservatively with long trousers, vest top and scarf covering my shoulders – this was fine in the Grand Palace of neighbouring Thailand, but it didn’t pass the test for the Royal Palace. I was refused a ticket and told to go home, get a T-shirt and return before 4.30pm!

I made the walk of shame to the T-shirt vendor at the gate and all was well and good when I ended up with a Phnom Penh Royal palace for just $3! It is possible to hire or buy T-shirts and trousers at the gate but it’s really an unnecessary expense.

Remember that most attractions in Cambodia are closed during the heat of the day from 10.30am to 2.30pm and this is also the case for the Royal Palace. Opening times for the Phnom Penh Royal palace (last checked Jan 2020) are….

How to get the the Royal Palace

I stayed at Number 9 hotel which was basic but had good food and was a great location for the Royal Palace. Phnom Penh is relatively walkable, but you want to avoid walking in the heat of the day as it can easily exceed 30 degrees.

I’d recommend getting a taxi, which should be no more than $1-2 if you are staying within the central areas. Download the GRAB app on your mobile and take a GRAB tuk-tuk which is cheaper (and more fun!) than a GRAB taxi. Grab is basically South East Asia’s version of UBER. You will be told the price in Rials but dollars will also be accepted – at the time of writing (January 2020) it was roughly 4000 Rials to the $1.

Ask your driver for the Victory Gate of the Grand Palace. You may need to get it written down in Cambodian (especially if you are flagging and negotiating your own tuk-tuk) because not many can understand English.

Inside the Grand Palace

Inside the Royal Palace gates you will be greeted by beautiful colourful gardens with an array of Cambodian trees and flowers. The main palace throne hall is directly in front of you when you enter and you are allowed to look inside the Kings quarters (but no photos are allowed of the inside). Enjoy exploring the Khmer architecture. Many buildings are guarded by Nagas (dragon spiritual beings) that sit either side of most stair cases. Also look closely for the guarding Yakshas on the rooftops.

The Moonlight Pavillion was a constructed stage where Khmer classical dance could be performed for the Royal family.

The Khemarin Palace is the common English name for a building called Khemarin Moha Prasat (Palace of the Khmer King). It is used as an official residence of the King of Cambodia. This compound is separated from other buildings by a small wall and is located to the right of the Throne Hall.

The offices inside the complex towards the back of the palace are guarded with golden Yakshas.

After the Kings Residence Area you will walk through to the complex of the Silver Pagoda. Originally built by King Norodom and inspired by Bangkok’s Wat Phra Kaew in the Grand Palace, the main vihara was rebuilt in 1962.

In the cloisters (walls surrounding the temple complex) you will see beautiful murals that are currently being livingly restored section by section. The murals depict the ‘Reamker’ – a Cambodian interpretation of the Hindu test ‘The Ramayuna’.

The pagoda is known as ….. in Cambodian but is referred to as the silver pagoda due to some 5000 or more silver tiles. Most of these are now covered up for protection, but you can catch a glimpse of these at the entrance.

Remember to remove your shoes before entering the Silver Pagoda main vihara and no photos are allowed inside.

The main vihara of the silver pagoda houses many riches of Cambodian Buddhism. Sadly, over half of these were removed during the Vietnamese invasion, but it’s one of the only places in Cambodia where such riches can be seen. The main treasures of the Vihara are the ‘emerald Buddha’ of Cambodia (it’s not actually made from emerald but crystal) and a life-sized gold Buddha  encrusted with more than 2000 diamonds. Around the vihara you will see statues telling the life story of the Buddha.

In the smaller secondary Vihara or chapel behind the main vihara you will find a ‘Buddha’s footprint’. This represents the 108 past lives of the Buddha before he was re-incarnated as Prince Siddharta, who subsequently gained enlightenment. We were allowed to take photographs in here without flash.

There is a beautiful Angkor Wat replica model to the right of the main vihara to show Cambodia’s finest archaeaological site.

Stupas and Statue of the King

There are several beautifully carved stupas (prangs) around the palace, many of which are dedicated to various Cambodian Kings and Queens. You can also see a statue of King Norodom himself.

The small hill aptly named ‘Kailassa Mountain’ is an oasis of calm in the city. It’s a small mound really and not very many steps to climb. At the top of the mountain you will find a small chapel surrounded by various Buddha statues sitting amongst beautiful plants and flowers.

Exhibitions near the Exit

As you exit the complex of the silver pagoda, there are several exhibitions and small shrines to explore.

There are several stone and wooden Buddha statues and Bodhisattvas (beings that have renounced their enlightenment to help others).

Don’t miss the wooden carving of the Buddha reaching enlightenment under the Bodhi tree.

There are exhibitions of ceremonial chairs used to transport the King during processions and also a photo gallery of traditional Cambodian costumes. Also there is a beautiful white elephant statue which is auspicious and representative of royalty.

Further Reading on Travelling in Cambodia

What to Pack for Southeast Asia

To help you pack for your trip to Southeast Asia, the below list of must-have items can be really useful.

First of all, you need a plug converter. Absolutely essential wherever you travel.

To avoid pickpockets, we recommend bringing with you a theft-proof backpack, or a crossbody bag, and a money bag.

It is also a good idea to get a hanging toiletry bag, which is a fantastic way to keep all your belongings organized; and a practical rolling suitcase like the one below by Samsonite in lightweight polycarbonate.

In order to stay healthy while travelling, activated charcoal helps with stomach distress absorbing toxins that may be in your system; and natural jet-lag remedy pills help you sleeping while boosting your immunity and can avoid you to ruin precious days of sightseeing.

For all the ladies, it can be a great idea to get a maxi dress: very versatile as it can be worn at any time of the day and it is ideal to go to temples too.

A scarf that you can put on your shoulders as well as on your head while visiting a sacred place.

Last, sunglasses and sunscreen are also vital to protect you from UV radiation that can be pretty intense in Southeast Asia.