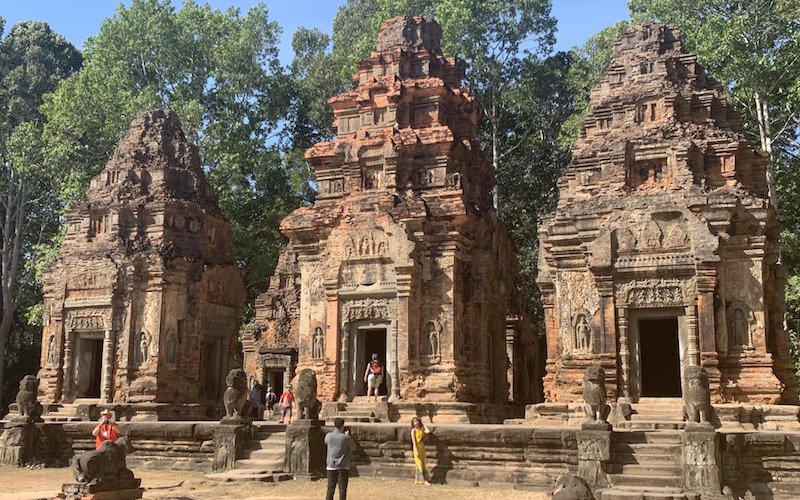 Focussing on the main temples of Angkor Wat and Angkor Thom, many people take a three day pass to Angkor Wat but still don’t make it out to the Roluos Group temples. This is a shame as they are actually the oldest and well worth visiting.

History of the Roluos Group Temples

These temples date back to the 9th Century – way before the main Angkor Wat temples which were 11th and 12th Century. They were part of the ancient town of ‘Hariharalaya’.

How to get to the Roluos Group Temples

You can take a tuk-tuk tour of the Roluos group temples of Angkor Wat for approximately $15 and it is doable within a morning. Most hotels and hostels will arrange this for you. Set out at around 7pm or 8pm and you will be back well before midday. The Roluos Group temples are in a small village Roluos approximately 13km East of Siem Reap town.

The Temples of the Roluos Group

There are three main temples of the Roluos Group that you can visit – Bakong (the largest and most impressive), Preah Ko (the most beautiful and best preserved) and Lolei (currently under renovation as of January 2020).

On the map, you will see that there appear to be 4 other temples in this group, but they are either broken or inaccessible so your Roluos group tour won’t include these. I tried to check out the fourth temple – Prei Monti. My driver didn’t even know how to get there, and was asking local children who were pointing him down a dirt track!

When we arrived at Prei Monti, it was broken and I was the only one there, which my driver thought was hilarious!

Needless to say don’t bother with the other Roluos temples – they are not worth the effort and you won’t see anything really. Stick to the main 3.

The most impressive of the Roluos group and the one that you will start with is Bakong.

Bakong strongly resembles Angkor Wat and is sometimes mistaken for it on pictures. Despite being on a smaller scale, it remains impressive as it’s older.

You can enter on one side and then walk up the temple and let your driver meet you at the other side. This is the only Roluos temple with toilets, so make use of the facilities here! be aware that the steps up to this temple are extremely steep. Mind your footing and prepare for a workout!

Preah Ko is the most beautifully preserved 9th Century temple of the group and one of the oldest Hindu temples in the world.

Preah Ko was the first temple to be built in the ancient but now defunct city of Hariharalaya, yet one of the best preserved.

Preah Ko is known as the sacred bull temple and was dedicated to Shiva, the God of death and destruction. Shiva was closely associated with the rule of Jayavarman II, the founder of the Khmer Empire.

What makes Preah Ko unique is the arrangement of 6 central towers (all of which are intact), which stand in two rows facing east. The three towers on the east side are staggered so that the central tower is slightly further to the west- this tower is dedicated to Shiva. The tower to the north was dedicated to the founder of Preah Ko, and the tower to the south was dedicated to the King’s father. Each temple would have contained a statue in the past, but these have now been removed (source: https://www.orientalarchitecture.com).

When I visited in January 2020, Lolei temple was under construction and not much can be seen through the scaffolding.

Lolei temple was built in 893 by King Yasovarman I, to honor his ancestors.

As I’ve mentioned, Preah Monti is not very accessible and has fallen down, so is not worth a visit. However, if you would like to see what it looks like now, here goes…

What to Pack for Cambodia

Take light cotton tops, long comfortable trousers and maxi dresses that cover your shoulders. Thailand is a conservative Buddhist county and you are likely to be refused entry to top sites like the Phnom Penh Royal Palace and Angkor Wat with shoulders showing and shorts or short skirts. You can pack shorts and vest tops for hanging around your hotel or the pool.

Pack a water bottle because many guest houses are eco friendly and have a refill and reuse policy to cut down on plastic waste. The drinking water is fine and many hotels supply cold purified drinking water.

Bugs bite particularly in the evenings in Cambodia and so a bug repellant is essential. Also the sun can get hot – this Christmas and New Year temperatures were exceeding 32 degrees and so sun screen is another essential.