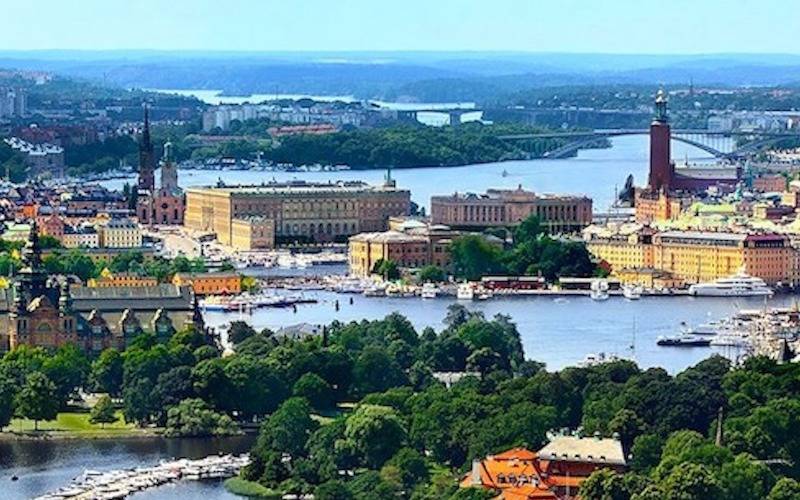 Often called the ‘Beauty On Water’, Sweden’s capital city lies on a number of islands and is a terrific city to be absorbed on Stockholm boat tours and cruises. Packed full of cultural sites and home to a great choice of restaurants, cozy cafes and stylish shops, the Swedish capital makes a fantastic destination for an action-packed city break.

Stockholm is a perfect blend of old and new, ultra modern and medieval. There are endless things to do in the city and there’re more than a hundred attractions to choose from. To make it easier, we’ve picked out the Stockholm highlights for you.

In today’s article, we’ll cover the different boat tours where there are hundreds of boats that circle around Stockholm’s canals and introduce you to the city from the deck of a boat.

For warm weather and sunshine, the best time to visit Stockholm is May to September. If you want snow, plan to go between November and March. The northern lights are best seen during the winter. Well, that all depends on what you want from your trip – whether that’s long summer nights beside the lake or snowy evenings around the bonfire.

How To Reach Stockholm from UK & US

Book your flight to Stockholm to enjoy a Scandinavian adventure of your own. As Stockholm doesn’t really have a peak season, flights to the city are reasonably priced throughout the year.

Flights to Stockholm during the summer holidays can be a little more expensive, however, you can search for the best deals even in July and August.

US Departures to Stockholm

There are four international airports (Arlanda, Bromma, Västerås, and Skavsta) in and around Stockholm. The city’s main terminal is Arlanda Airport, which is located around 25 miles away from central Stockholm. From Arlanda, you can travel to the city center quickly and easily by bus, train or taxi.

Stockholm Boat Tours – Under The Bridge

There are numerous Stockholm boat tours and cruises available. A brief tour of Stockholm’s inner waterways will take less than an hour, while a longer trip to the Stockholm Archipelago will take at least three hours, if not the whole day. You should think about which direction you want to head in. In the west there’s Lake Mälaren, east goes beyond the city limits, and the central Stockholm reveals the beauty of the inner city. Let’s check out what each boat tour has in store for you!

The Stockholm Historical Canal Tour by Boat is the perfect boat sightseeing tour if you want to enjoy the beauty of Stockholm and its second-largest island on M/S Sjöfröken built in 1875. You need to present your Stockholm Card at the ticket booth to get a ticket or book here.

Here you’ll get a chance to learn about the history and culture of Sweden’s capital through boat’s engaging commentary about the city’s historical heritage. This is a 50-minute sightseeing tour by boat through the pleasant waterways lined with interesting architecture and trees all around.

The tour begins at Klara Mälarstrand and soon you’ll be sailing past the City Hall (one of the Stockholm’s most iconic buildings) where the Nobel Banquet is held every year. You’ll cross Riddarfjärden before entering the lush canals around Långholmen Island and Reimersholme. After that, you’ll be out in the open again heading for Karlbergs Palace. You’ll enter the final canal of the cruise before returning to Klara Mälarstrand.

2. Grand Tour By Bus And Boat

Get the best out of Stockholm with the Grand Tour by Bus and Boat – a combined bus and boat sightseeing tour to admire the views from the Baltic Sea and Lake Mälaren. This tour (3.5 hours) is a combination of ‘Stockholm Panorama’ (a 75-minute tour on a panoramic sightseeing bus taking you through the main attractions in the city) and ‘Under the Bridges of Stockholm’ (cruise under several bridges to discover the inner city) tours. Along the way, you’ll be able to learn about the sights you pass from a recorded audio commentary (available in 10 different languages).

On the Royal Canal tour, you will visit the greener areas of Stockholm on board a canal boat and cruise for 50 minutes along the Djurgarden Canal, departing from Stromkajen in the center of the city. Enjoy the cruise while listening to an informative audio guide in 10 languages (Spanish, Swedish, Chinese, English, Estonian, Finnish, French, German, Italian, Russian) to choose from.

Adore the top sights of Stockholm by booking this 2-hour Under the Bridges sightseeing tour and enjoy the recorded commentary in your choice of 10 languages as you sail on both the Baltic Sea and the Lake Mälaren. This is the perfect tour when visiting Stockholm with family.

Enjoy a journey full of beautiful attractions and fascinating stories while you relax and take in the famous scenery of the archipelago on this Stockholm Archipelago Boat tour. This is a 2.5 hours sightseeing tour where you climb aboard a classic archipelago ship and cruise the waterways of Stockholm.

Explore the mesmerizing beauty of Stockholm by sea. Get on and off at as many stops as you like during the validity of your ticket with this Hop-On Hop-Off Boat Tour. This is a 24-72 hour tour where the boat stops at popular sites such as the Royal Palace, the Vasa Museum, Old Town, and Nybroviken (the downtown area with shopping and restaurants). You can enjoy audio track (10 different languages to choose from) free Wi-Fi, toilets and a cafe on board.

Discover the wintry Stockholm on this 1-hour Winter boat tour. Admire magnificent views of Stockholm as you cruise along the city’s quays and around the island of Fjäderholmarna. Get to know the interesting facts about the city by your guide and if you feel a bit chilly, can enjoy delicious Swedish Glögg, a traditional hot mulled wine in the cafeteria.

Helpful Tip: There can be notable weather differences in Stockholm because of the city’s seaside location. Even on a sunny day, things can get chilly! So your best bet is to always carry a jacket/muffler, no matter what season.