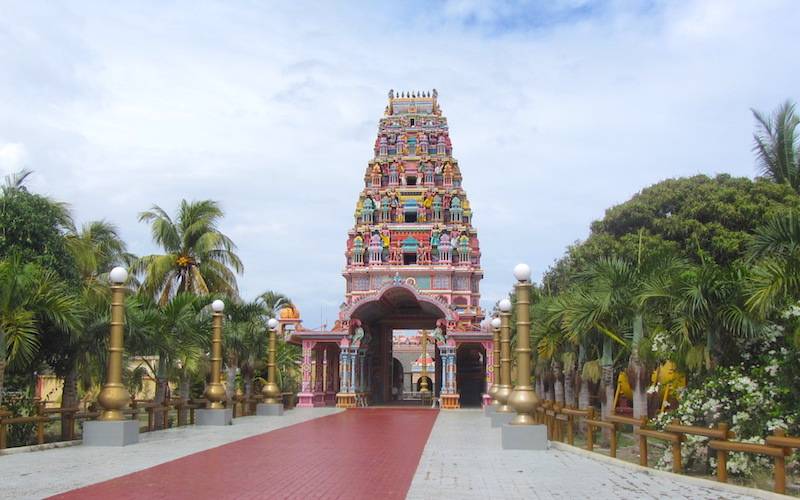 The predominantly Hindu island of Mauritius lies in the Indian Ocean around 855km from Madagascar. The island is abundant in tourism due to the coral reefs, beaches and natural landscape. The combination of colonial influences and a history of slavery from India has resulted in a melting pot of language, culture and religion. French is still widely spoken. The temples in Mauritius are predominantly Hindu, with many Tamil influences. Churches and Mosques can also be found. The most famous of the temples in Mauritius is Ganga Talao, known locally as Grand Bassin.

The most famous Temples in Mauritius – Grand Bassin (Ganga Talao)

Grand Bassin is a crater lake located in the south of Mauritius some 1800 metres above sea level. The beautiful sacred lake is surrounded by temples and colourful Hindu deities. We combined our visit to Grand Bassin with a Full tour of the South West, which included the colourful sands and Chamarel waterfalls.

Ganga Talao translates to ‘from the Ganges’ as was once seen in a vision by a Hindu priest. Every year since then, Hindu pilgrims walk bear foot from their homes to Ganga Talao during the Maha Shivaratri celebrations.

As you approach the Grand Bassin by car, you will be greeted by two enormous statues – a Durga Mata (Mother Goddess in Hinduism) and a 33m high Shiva (God of destruction – the largest statue in the whole of Mauritius!).

Statues of Gods and Goddesses surround the beautiful serene lake. You will see the worship of many Hindu Gods and Goddesses including Ganesh (Elephant God of Wisdom), Parvati (Goddess of Wealth) and Shiva (God of Destruction). Feel free to say a prayer and make a donation if you wish. My God of choice was Hannuman, the Monkey God.

Ganga Talao itself is not one single temple, but actually a complex of many temples, devoted to many different Gods and Goddesses. In fact, it is multi-faith, as there is a Jain Statue for worshippers of Jainism (a non-theistic religion founded in India in the 6th century BC by the Jina Vardhamana Mahavira) and also a Sikh temple.

The main temple has a focus on Shaivism (Shiva worship), and the Lingum temple at Grand Bassin is the largest outside India and one of the most famous temples in Mauritius.

The Tamil presence in Mauritius forms part of the larger Indian diasporic migration (https://en.wikipedia.org/wiki/Tamil_Mauritians). Between 1826-1910, an influx of Indian labourers, many coming from Tamil Nadu in the South of India. Mauritius is currently approximately 50% Hindu (the rest of the population being a mixture of Islam and Christianity predominantly). It’s no surprise that some of the temples of Mauritius that have emerged from the diverse migrant population include the colourful Tamil temples displaying beautiful Dravidian art.

During my time in Mauritius, I was lucky enough to visit two beautiful Tamil temples in and around Port Louis. The first was the Kaylasson Temple at Sainte Croix in Port Louis itself. The temple is free to get in and easy to find as it’s near the Blue Penny Museum.

I combined these temple visits with a full-day tour of Port Louis, including the Port Louis Citadel and Pamplemousses Botanical Gardens.

The temple structure itself represents a reclining body, with the thousand-petalled lotus flower the crown of the head and the entrance arch its feet (https://www.roughguides.com/destinations/africa/mauritius/port-louis-around/centre/kaylasson-temple/).

It’s worth a visit for the striking colourful Tamil statues that decorate the temple. It’s domes, sides and interior are decorated in beautiful figures from Hindu mythology. Can you spot Ganesh?

Constructed in 1854, this is one of the oldest and most colourful temples in Mauritius. The entrance is stunning, with palm tree surrounds and a mountainous backdrop.

Visit the Sockalingum Meenatchee Ammen Kovil temple for a more serene location to worship Shiva (the destroyer) than Ganga Talao. It’s also free to enter but you might like to take a small donation.

Inside, you can make an offering to Lord Shiva, but you won’t be able to enter the Lingum chamber. The Hindu priest will make any offering on your behalf and ask you to stand outside the room that the Lingum is in.

Maheswarnath Shiv Mandir is one of the largest Hindu temples in Mauritius located in the village of Triolet, and is another temple devoted to Shiva. It was built in 1891 following the massive influx of migrant workers near the sugar factory. Its founder came from Calcutta.

Built in the Bengal style of temple architecture, the grand edifice is a variation of the Pancha-Ratna or a five-flowered temple built on a platform. The white outer wall is painted with floral patterns and images of Hindu deities. The main temple houses the Shivalinga along with idols of Shiva’s wife Goddess Parvati, his children Ganesha and Kartikeya and the gatekeeper – Nandi. As well as the main temple, there are temples in the complex devoted to Laxmi, Lakshmi-Narayana, Hanuman, Jagannath, Goddess Kali, Saraswati and Durga. (https://www.holidify.com/pages/temples-in-mauritius-853.html).

Located in Port Louis, the Kwan Tee Pagoda Buddhist temple will instantly remind you of imperial China. It’s known locally as ‘Les Salines’ because it is found in the area where the first saltworks on the island were located.

The Kwan Tee or Guan Di Pagoda is the oldest in the Southern Hemisphere and the oldest one in Mauritius. It’s an oasis of calm in the hustle and bustle of a busy city.

Kwan Tee was a great warrior and man of honour known for his righteousness and benevolence. At his death, he became a hero and is deeply revered by the Chinese people (see Chinese Heritage in Mauritius).

Want to see more of Chinese culture in Mauritius? You might also like to visit the Heen Foh Lee Kwon Pagoda.

The Sri Siva Subramanya temple is commonly known as the mountain temple. Velamurugan, an Indian labourer who set foot on the island of Mauritius in 1884, had the dream of building a temple on the side of the Corps de Garde Mountain. In 1907, his determination came to fruition, with hundreds of steps leading to the modest temple higher up the mountain. This has today been transformed into a divine Dravidian piece of art, dedicated to Lord Murugan – the Hindu god of war (see Mauritius Explored).

The temple is now a major pilgrimage site in Mauritius, especially during the Thaipusam Cavadee, celebrated predominantly by the Tamil community.

If you are interested in religion and culture in Mauritius, you should read about celebrating Diwali in Mauritius. If you wish to know about exploring this country instead, you should check out the following posts: Blue Safari Mauritius Excursions – A Submarine Journey!, Things to do in Port Louis, Mauritius, and Highlights of South Mauritius Tour.

1 thought on “Temples in Mauritius – Grand Bassin and Beyond”