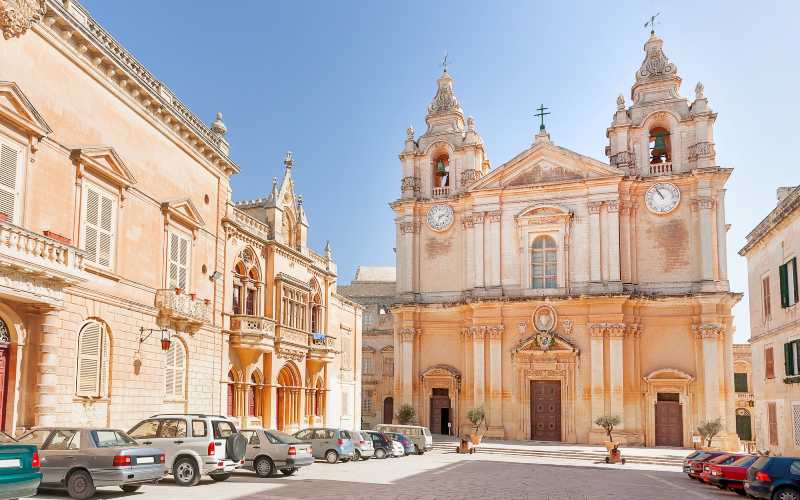 Malta is one of my favourite European travel destinations. It’s beautiful coastline means that it makes a great beach holiday. But it’s the historical temples and beautiful Cathedrals and Churches that truly make Malta special. Today’s blog focuses on the best Cathedrals in Malta and Gozo that you should visit.

There are four main Cathedrals in Malta that you should visit:

The former pro-cathedral is located in Valletta, the capital city of Malta. The cathedral is also referred to as St. Paul’s Cathedral or the Valletta Cathedral and it is the seat of the Bishop of Malta. The building was completed in 1673 and it is a masterpiece of Baroque architecture in Malta. The building has a dome, which rises 48 meters above the floor level and dominates the skyline over Valletta and Sliema. At its height, it can be seen from various locations across Malta, including from Mtarfa, Gudja and Birzebbugia.

At the time of its completion in 1673, it was the tallest structure in Malta and remained so until construction of the Capuchin Tower started in 1696. The dome of St. Paul’s Pro-Cathedral was dismantled in 1787 by engineers and workmen from Napoleonic France as part of their siege strategy to render Valletta indefensible against attacks. At the time, it was among the few buildings in Valletta that had a dome, which made it an ideal military target during this period. The dome was then restored in the 1880s and is open for exhibitions during the summer months.

In 2008, the cathedral was reopened and refurbished after a period of restoration which took place from 2004 to 2008. The grand reopening of St. Paul’s Pro-Cathedral was held on November 3rd, 2008 by Archbishop Charles Scicluna, who has been installed as the bishop of Malta in November 2005. Following his installation he returned the official residence to St. Paul’s Pro Cathedral, abandoning it for St John’s Co-Cathedral in Valletta which he occupied until his installation as Archbishop and Bishop of Malta.

The co-cathedral of Malta can also be referred to as St. John’s Cathedral. It is the seat of the Archbishop of Malta and one of the most popular Cathedrals in Malta. The building was built and completed in 1831 and it was the first cathedral to be completed on the island after a series of cathedrals that had been constructed over a span of nearly two centuries had been abandoned in favour of new cathedrals that were ready for use. The building is located in Valletta, which has been the capital city since 1798. It is located to the western side of St Paul’s Pro-Cathedral and it has remained part of this complex since construction began on this new cathedral.

The cathedral was built in the Neo-Gothic architectural style of the period and it is rectangular in shape and has a nave, six side-chapels, two transepts for each arm of the cross and a central dome. The dome is 48 meters tall and it contains an unfinished figure of Christ that was symbolically filled by molten silver by Bishop Gozo’s wife Agatha Cotoner prior to construction. The cathedral also houses a crypt beneath its floor level and this was where Bishop Gozo used to reside when he was appointed to Malta in 1734. The cathedral remains open to tourists during the summer months but it has been abandoned for many years due to disrepair. Following the refurbishment that took place from 2004 to 2008, it has been again opened to tourists and it can be visited during the summer months.

Cathedral of the Assumption in Victoria, Gozo

The chapel of St. Blaise forms part of the cathedrals complex in Victoria, Gozo and this church is also dedicated to St. Blaise. It was built between 1728 and 1753 under supervision of architect Joseph Sciberras who was assisted by his nephews at the time, Antonio Sciberras (1726 -1796) and Lorenzo Capparos (1731 – 1803). The chapel is a single nave rectangular chapel that has vaulted ceilings and it was the first church to be built on Gozo. The upper portion of the buttress walls facing the nave are topped with a balustrade which was added in 1844. An extensive restoration of the building took place between 1990 and 2001, which saw the replacement of stones that had cracked as well as damaged parts of the façade and two buttresses.

The balcony facing eastwards from above the main entrance was added in 1575 by Bishop Gargallo while several other alterations were made during the early 19th century. The church continued to be used until about 150 years ago when it eventually fell into disrepair. The front façade of the building as well as the entrance has undergone extensive restoration but most of the original design remains unchanged.

The cathedral was built in neo-classical architectural style and it features a bell tower on one side. The bell tower is not open to public and it can only be accessed by climbing a staircase located on the west side of the chapel. It is referred to as St. Blaise’s Cathedral or Assumption Cathedral in Victoria, Gozo, which is its official name.

This is the cathedral of the Roman Catholic Archdiocese of Malta and it is located in Mdina, Malta’s old capital city. The cathedral was built in the 16th century and its construction started sometime during 1575. The building was consecrated in 1610 and it is dedicated to St Paul. It is a Baroque church which has three entrances and its interior is richly decorated with marble columns as well as a red-hued altar that can be seen from afar.

The façade of the building also features several intricately designed statues, which depict scenes from the life of Jesus Christ. The cathedral was left abandoned for over a century since it was last used in 1796 when the clergy moved to a new location. The cathedral remained closed after this period until it was refurbished and restored to its original state in 1941. It is a listed monument which means that no changes can be made to the exterior of the building as well as its interior.

If you enjoyed this blog on the Cathedrals in Malta then you might also like to read about these top 10 Churches and Historical sites in Malta.

If you are interested in historical sites I would recommend that you visit Hagar Qim, one of Malta’s well preserved prehistoric megalithic temples.