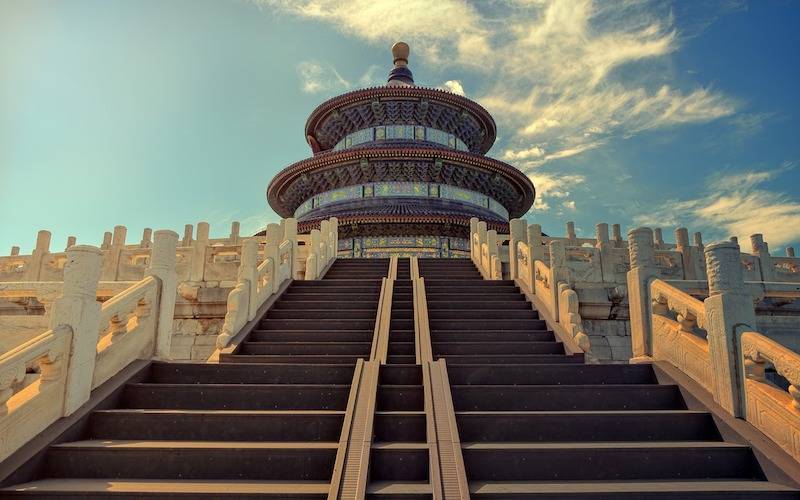 China is one of the most fascinating and culturally rich countries that I have ever been to. It’s also one of those really good countries to travel that aren’t too expensive. The vast size of the country means that there is plenty to explore – Sichuan province alone is approximately twice as big as the United Kingdom. I spent a month in China following my graduation, and have summarised my highlights of China – Beijing and Beyond. Please note that my main focus is historical and religious sites, so natural beauty is not included here, although China is full of natural beauty also! Enjoy my top highlights of China.

In order to prepare fully for your trip you might find this article on things to know before you visit China helpful.

Probably one of the most beautiful sites I have ever seen, and topping my list of highlights of China is the Summer Palace for me outranked event the famous great wall of China and Forbidden city. Located just outside Beijing, the Summer Palace was an imperial garden in the Qing dynasty, developed by Emperor Qianlong in the 18th century.  The Kunming lake and hilltop views provide a stunning backdrop to the palace.  During the summer, you can take a boat across the lake to the South Shore, which I highly recommend.

Like something out of a kung-fu movie set, it’s the vastness of the Forbidden city that truly astounded me. Get there early, and explore right to the back, past the colourful 9 dragon wall, where you will find secluded spots of the city.  The forbidden city used to be the imperial palace during the Ming and Qing Dynasties. Ordinary people were not allowed in without permission, hence the name, although it is not forbidden anymore, but much of a popular tourist attraction.

Travel tip: Be aware of people distracting you before you enter, asking you to ‘come and see my art gallery’, which is simply a sales technique for art and calligraphy. While it is nice to see, it will take a lot of time away from your schedule.

In the middle of a beautiful park in Beijing where locals enjoy exercising and spending family time together, the temple of Heaven is a place where past emperors worshipped Heaven in the Ming and Qing Dynasties. The Temple of Heaven was first built in 1420, and its Confucian design is based on order and symmetry. Central to the main three tiered temple is the Hall of good Harvest.

Travel Tip: The Temple of Heaven park is a good place for a picnic – there’s a lot of walking a few shops inside.

The great wall of China is one of the most famous man made structures in the world, and although it was not as impressive as the Forbidden city and temple of Heaven to me, still it is one of the highlights of China not to be missed. Many tours combine a trip to the Great Wall with the Ming Tombs. Be prepared for a lot of steps – the further you walk the more crowds you can avoid, giving better photo opportunities.

Possibly one of the greatest archaeological discovery in the world, the Terracotta Army is and army of more than 8000 life sized terracotta warriors unearthed in 1974 by local farmers. They were built in approximately 210-209BCE to guard the tomb of the first Emperor of China – Qin Shi Huang.

Travel tip: Avoid the rip off drivers of ‘fake’ buses that target foreign travellers at the exit. Ignore anyone who approaches you for transport back to Xian and follow the locals to the local buses with a big number 306 in the window. The price should only be around 5Y whereas the rip off drivers have small white mini buses and try to charge you 40Y plus made up ‘toll roads’.

The Leshan Buddha carved into a rock face in Sichuan province is the biggest Buddha in the world. It will take you around 45 minutes to walk to the top, where you will be greeted with the beautiful Wuyou temple and it’s colourful statues of disciples of the Buddha.

Travel tip: Go early and in the middle of the week to avoid the swarms of tourists.

One of the four sacred mountains of Chinese Buddhism, the hike up Emei Shan was one of my most memorable times in China. The first Buddhist temple was built on the summit in 1st Century. There are now in excess of 30 temples and monasteries, many of these monasteries offering overnight accommodation for tourists and pilgrims.

Travel Tip: There is a lot of hiking involved (in excess of 16 hours to the summit). If you will struggle wit this amount of walking, use the cable car to help with the journey. Also, as mentioned, it is possible stay overnight in one of the monasteries to break up the journey into a 2 or 3 day hike.

The Lomgmen Caves or Longmen Grottoes in Henan province is one of the key cultural highlights of China as they house some of the finest examples of Chinese Buddhist art, including tens of thousands of statues of Buddha and his disciples. The Chinese art of the Longmen Grottoes is predominantly from the late Northern Wei and Tang Dynasties (316-907).

Travel tip: If you are based in Xian to see the Leshan Buddha, you can just about do the Longmen Grottoes as a day trip, but I recommend staying over in Luoyong to fully enjoy the trip without being over tired.

One that I never made, and will remain on my bucket list is the hanging monastery or hanging temple of Mount Heng in Shanxi province. The unlikely temple was temple built by a monk named Liao Ran in the late Northern Wei Dynasty (386-534 AD). It has seen some restoration in the 1900’s. The temple contains some 40 rooms built into the side of a cliff. Not only does it defy the laws of gravity, but also the laws of religion as it is used as a place of worship by all three main Chinese religions: Buddhism, Confucianism and Taoism.

Travel tip: Take a bus to Lingqiu County, and get off at the Hanging Temple station. Be aware that if you suffer from vertigo or are afraid of heights this could be a challenge.

The Potala Palace in Lhasa (Tibet) was the residence of the Dalai Lama until the 14th Dalai Lama fled to India during the Tibetan uprising (1959). It is beautifully built on the top of ‘Red Mountain’ at an altitude of 3700m.

Travel tip: Be aware that you should avoid any political activism in China, particularly regarding the independence of Tibet.

If you enjoyed my blog on the highlights of China, you might also like to read about hiking Emei Shan. Fancy travelling China by Train? Here’s everything you need to know about train travel in China.

Are you Vegan? If yes, check out this Vegan Guide to China.