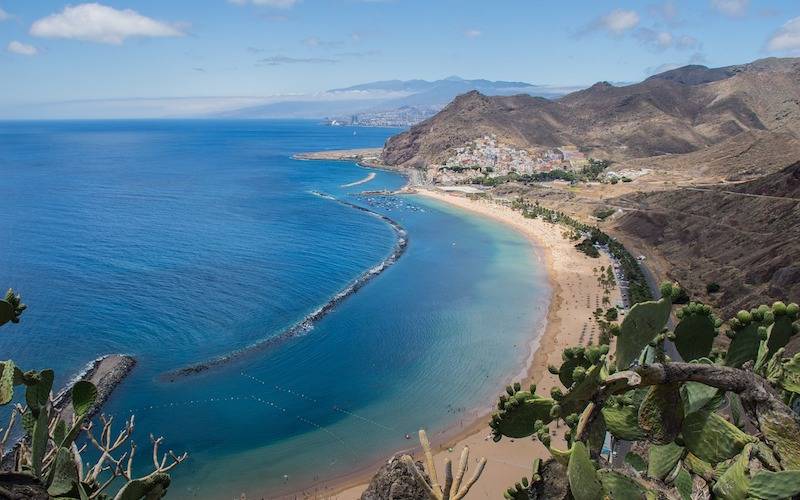 The island of Tenerife in the Canary islands is perfect for a 7-10 day break. If you want to travel extensively, or combine it with a few relaxation days, it is worth spending 2 weeks on Tenerife. There are some amazing places to visit in Tenerife including Mount Tiede (volcano), Masca Village in the mountains and the Puerto de la Cruz street art.

Places to visit in Tenerife – Where to Stay

Let’s be clear on my feelings about Tenerife – avoid Playa Las Americas! That is, unless you want a booze up with your mates and to go on the pull! The South of the Island is really the party hub and good for water sports, but you won’t find much Spanish culture there. But personally, I visited Tenerife predominantly for the culture and scenery. I’m also learning Spanish, so I didn’t want to be based in an English part of the island. I stayed in Puerto de la Cruz. The capital of Santa Cruz is popular amongst shoppers.

Places to Visit in Tenerife

One of the best places to visit in Tenerife is the Tiede Volcano and National Park. If you enjoy photography, you really need to take a Tenerife excursion to Teide to get some good snaps of the volcano and surrounding areas of beauty. Tiede is central Tenerife and so it is easy to get to by car from wherever you are staying on the island, and all resorts offer tours to Tiede.

The scenery en route to Tiede is spectacular.

The majority of ‘Los Murales’ (street art) were painted in 2014 for the launch of the outdoor museum, but I have noticed that more street art has popped up since then! You can see most of the street art on foot within about an hour.

Also, while you are in Puerto de la Cruz, I recommend a visit to the Botanical Gardens – Jardin Botanico, where you will see plant species from around the world including the massive Bayan tree.

I would personally avoid Loro Parque as there has been some questioning regarding the ethical treatment of animals. I’m not a fan of anywhere that advocates taking Whales out of the wild and into what is essentially a swimming pool (watch Blackfish and you will see what I mean.

Deep within the mountains you will find the stunning Masca village that takes you back in time through the winding roads. It’s quite an experience watching the drivers argue over who goes first when crossing paths – it seems to be the one who can shout the loudest!!! Views of the mountains and surrounding scenery are spectacular. There were some lovely souvenir shops and Spanish guitar playing in Masca village when we arrived.

Don’t visit Tenerife without a trip to the capital, predominantly for shopping as they ave most Western chain stores in Santa Cruz with prices relatively affordable compared to the UK.

Most visitors to Icod de los Vinos go to see the famous ‘Dragon Tree’ and the beautiful botanical gardens. I like to call it the ‘broccoli tree!’

Across the island, coastal boutiques and water sports are abundant. Tenerife is easy to get around and great for solo female travel.

If you’re heading to Spain in summer, don’t forget the essentials for the beach including swimwear, sun cream and a beach towel. Also pack your sunglasses or prescription sunglasses if you usually wear glasses on a daily basis.

For footwear, pack a pair of flip flops for the beach and then also a pair of walking boots for any hiking that you might do. Add a pair of dress shoes into the mix if you are in a fancy hotel, but they are not necessary otherwise.

The best clothes to pack for Spanish islands include T-shirts, shorts and comfy dresses. One pair of jeans wouldn’t go amiss.

Further Reading on Places to visit in Tenerife