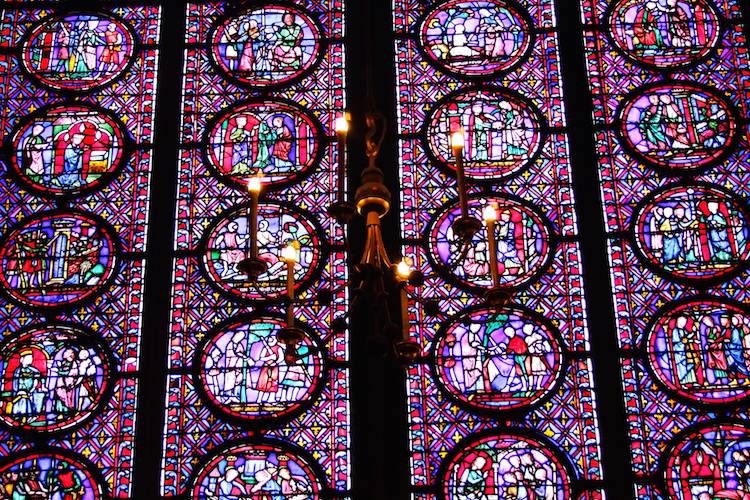 One of my favourite sites of Paris, without a doubt is Sainte Chapelle. It could be the way that history, politics and religion are interwoven through the background. It could be the religious power of the chapel that came with housing the crown of thorns. It could even be the intricate detail of the external gothic architecture. But lets be honest, the real reason that we all yearn to visit is the Sainte Chapelle stained glass windows, which stunningly tell the story of the Bible.

The first time I ever saw Saint Chapelle, I was so overwhelmed by the beauty of it, that I didn’t take in the historical or religious significance. This week, I returned to Paris again for a second time, to be blown away by the beauty, but also to explore the background a little deeper.

Why was Sainte Chapelle built?

Located on Ile-de-la-cite, the island in the middle of the river Seine, the building complex (Palais de la Cite) in which Saint Chapelle is located was the heart of past Parisian politics and monarchy until the 14th Century. Sainte Chapelle was originally commissioned by King Louis IX of France to house the crown of thorns of Jesus Christ, seen to be one of the holiest relics in Christianity.

Despite being damaged in the French Revolution (1789-1799), Sainte Chapelle was restored in the 19th Century and remains one of the most stunning examples of stained glass in the world. The upper chapel itself was originally reserved for the King.

Only five colours are used in the Sainte Chapelle stained glass windows – blue (from cobalt), red and green (from copper), purple (from manganese) and yellow (from antimony). In the 13th Century, stained glass was cut with a red hot iron (it would be later cut by diamond).

Once cut, the pieces of coloured glass would be painted. Details such as facial expressions and folds in fabric were added with the ‘grisaille’ technique of monochrome painting in shades of grey. This is a mixture of powdered glass and iron oxide, diluted in water and vinegar and applied on to the coloured glass with a paint brush. The painted pieces of glass are then fired a second time at 600C to fix the grisaille.

The sheer #beauty of the #stainedglass #windows of #saintechapelle in #Paris. The 16 stained glass windows tell the story of the #Bible and how the #relics of the #crownofthrorns and the #truecross came to be stored at the chapel. #christianity #historic #stlouis #iloveparis

When they had been coloured, cut and painted, the pieces of glass were then assembled scene by scene and held together with strips of channeled lead. Finished sections of the stained glass windows are never very large, to make sure that they don’t collapse under their own weight.

The stained glass windows are held together using iron bars and rods known as saddlebars. These support the whole window and hold it in place, taking the weight of the upper sections. The ‘vergettes’ are smaller, horizontal bars that strengthen the window from top to bottom.

Reading the Windows of the Sainte Chapelle Stained Glass

The Sainte Chapelle stained glass windows are to be read from left to right and top to bottom. The widows numbered 1 to 15 start on the North wall, which is to your left when you enter the chapel. The iconography depicted by the windows is as follows:

How to get to Sainte Chapelle and where to stay

You can get to Sainte Chapelle by heading towards Ile-de-la-cite, the island in the middle of the river Seine. The nearest Metro stop is Cite.

Hotel Notre Dame and Hotel Victoria Chatalet are good value options if you want to stay close to this location. If you are looking for something a little cheaper, check out Pigalle district near Monmartre. You can also compare accommodation prices on Trip Advisor, Agoda or booking.com.