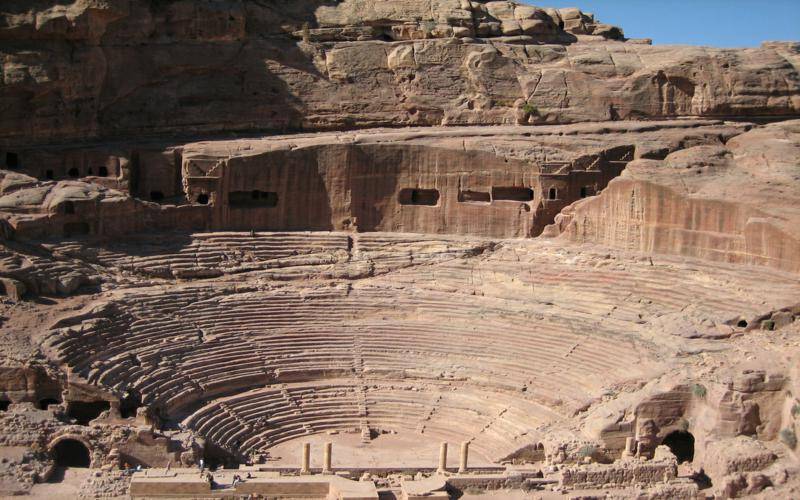 Petra is a unique and historic location in the south of Jordan.  It was created by the Nabataeans over 2000 years ago and is carved from the rock of the Jabal Al-Madbah.  The Nabataeans were nomadic Arabs who decided to create a city to become a trade crossroads for the area and it eventually became a major trading hub.  Petra tours are the best way to see the highlights of the ancient city and there are various ones including from Israel and also Petra tours from Amman.

Amman is the capital of Jordan and is a great place to stay as a base to explore Petra and the surrounding area.

This tour involves a 10-hour excursion around Petra.  You leave from Amman in an air-conditioned vehicle with a stopping break.  Arrival is at the Petra Visitor Centre and you have the option of purchasing an English-speaking guide to take you around the site or continuing on your own.  See the amazing sights of the city, the Grecian style façade of Al Khazneh and the narrow canyon of Al Siq.  Learn about the Nabataeans who built the city and why they created it before returning to Amman.

From Amman: Full-Day Tour to Petra

Known as one of the Seven Wonders of the World, Petra is an engineering marvel that is over 2000 years in age.  With this Petra tour, you will travel through Al Siq, the narrow canyon that leads to the city and see the amazing rock from which it is carved.  Then you enter the canyon itself with the hundreds of rock-cut tombs, obelisks and temples as well as the collonaded streets.  Learn about the history of the site and visit the two museums there before finishing the tour with a visit to a nearby Bedouin village.

This is a two-day tour that incorporates Petra and the Dead Sea.  On the first day, you will leave Amman and head south to Petra.  See the city carved into the rock by the Nabataeans over 2000 years ago and which became one of the top trading posts in the area.  See the Treasury, the monastery and the Altar of Sacrifice.

On the second day, visit Wadi Rum, where the film Lawrence of Arabia was filmed before travelling to the Gulf of Aqaba and the Red Sea coast (not in winter).  Finally move to the Dead Sea which, at 400 metres below sea level, is the lowest point in the world.  Enjoy time for a swim before returning to Amman.

This Petra tour from Amman lets you see the best of this ancient city as well as the people who live around it.  The tour leaves from the city and travels through The Siq before visiting the theatre and treasury of Petra.  See the amazing carvings that dominate the city’s entrance and have two hours to explore it.  Then the tour leaves for Wadi Rum and a jeep tour of the area.  See Thamudic inscriptions and the stunning sand dunes in the area before taking an optional meal in a Bedouin tent.

If you are staying in Amman and want to enjoy a tour that combines the best of the city’s history as well as the amazing location that is Petra, this tour is perfect.  It starts with a visit to the Madaba Churches then visit Mount Nebo.  Next, travel the King’s Way and see the Roman forts and Nabataean temple before visiting the Dead Sea.  Finally, see the crusader castles at Karak and Shobak before arriving at Petra to tour the rock-cut city.

If you are staying in Israel, you are also ideally placed to visit Petra, and there are tours of the city from various locations across Israel.

From Eilat: 2-Day Tour to Petra

This two day Petra tour from Eilat allows you to see the very best of this amazing location.  Pass the Obelisks to enter the cave tomb then walk past the towering red stones that mark the entrance to the city.  See the giant Deir, the temple with 40 metre high columns and the Roman theatre.  You will have dinner in the city and then a free evening.

On the second day, you can continue to explore Petra before travelling to a nearby Bedouin market.  After lunch, see Wadi Rum before returning to Eilat.

Travel in an air-conditioned vehicle from Jerusalem to Petra with this tour.  You will see the heart of the Nabataean Civilisation, often known as one of the Seven Wonders of the World.  See the rose-coloured rock that gave the city its name and take a guided tour through the main parts of the city.  The tour includes entrance fees and an English-speaking guide.  Finally, the tour visits the Red Sea port of Aqaba where you can explore and see the beaches before returning to Jerusalem.

This tour departs from Tel Aviv and is a full three days of guided exploration.  First, you will travel through the Jordan Valley and stop at Jerash, one of the best-preserved Roman towns in the world.  See Hadrian’s’ Arch and the collonaded streets with their unique blend of Roman and Greek styles.  After lunch, visit the Citadel of Amman and the Temple of Hercules.

After this, you will stop at a Bedouin camp near Petra.  Enjoy their authentic cuisine and stay a night in a tent.  The next morning, you will start exploring Petra.  Over 2,000 years old, the city is cut into the pink rock and has had a complex and fascinating history.  Learn about it while touring the main sites then return to the Bedouin camp for the second night.

The final day includes a jeep ride through Wadi Rum (above) with its untouched desert and towering cliffs of stone.  There is lunch at a local restaurant then the return trip to Tel Aviv.

What to pack for the Middle East

Consider packing conservative clothing and a shawl or headscarf for women if you would like to visit religious places. Some comfortable sandals work well in the Middle East as it can be hot so they will let your feet breathe. It can get extremely hot in some parts of the Middle East and so sun cream is essential.

It’s a good idea to pack conservative clothing for the Middle East. Avoid short skirts and low cut tops or spaghetti straps. Comfortable trousers and linen tops are great. Long skirts and Maxi dresses also work really well and are comfortable with the hear. Don’t forget your sunglasses, and pack your prescription sunnies if you have those!