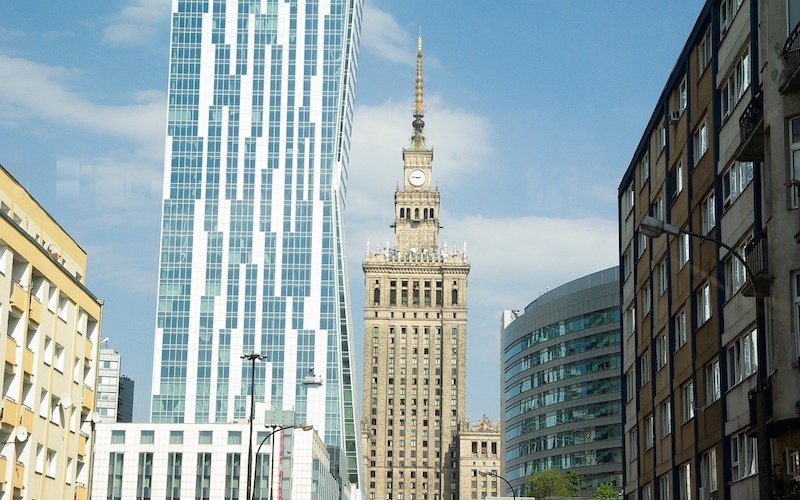 Poland is a popular place to visit with its historic cities, stunning countryside and also poignant locations associated with World War II.  There are also plenty of Poland tours from the main cities that allow you to see the best of the country and learn first hand its history.  It’s one of my favourite countries for solo female travel. Here are some of my favourite locations and Poland tours.

Warsaw is the capital and largest city of Poland on the Vistula River.  Warsaw is the 8th most populous city in the European Union and was also one of the most beautiful cities in the world.  However, it was also badly damaged during World War II when it withstood a siege by the Nazis.

Frederic Chopin is one of Warsaw’s most famous former residents and a brilliant place to experience his music.  Here you can visit the building where he lived until the age of 13 and close to the musical conservatory where he graduated.  Enjoy coffee and snacks that were the pianist’s favourites before listening to a one hour performance of his work in just the way he once played for family and friends.

The Warsaw Uprising Museum and POLIN look at the role of Poland in World War II and is a trip back to 1944 with a look at the lives of the people living in the city at the time.  This tour includes a small tour around the museum where you can learn about the hardships of life during the war and the terror of communist life after it.  There are over 1,000 exhibits to see, over 1500 photographs and a number of movies as well as a 3D simulation flight over Warsaw at the height of the war damage.

This top Poland tour is a great way to fit in the best of Warsaw when you don’t have a lot of time.  The route includes the Old Town and Lazienki Park as well as the UNESCO World Heritage monuments.  You can also visit the Jewish Ghetto with its World War II memorials.

See the Museum of the History of Polish Jews and see where Jews were held by the Nazis before being transported to the death camps.  Finally, see the Tomb of the Unknown Soldier and other monuments before crossing the Dąbrowski Bridge and returning to your hotel.

This tour lets you skip those queues and see the UNESCO-listed Royal Castle with a licensed guide.  The castle is one of the most popular attractions in the city and has exhibits on the royal life of Polish kings.  It also includes a walk around the Old Town on foot, a 3 hour tour to see the best of the oldest part of the city.

Krakow is the second largest city in Poland and one of the oldest.  It is located on the Vistula River and has a history dating back to the 7th century.  At the heart is the Old Town, a UNESCO World Heritage Site.

This tour is a chance to see the stark reality of the largest concentration camp complex in World War II where over 1.5 million people died.  It’s one of the worlds most infamous Dark Tourism destinations.You can see the railway ramp where prisoners would arrive and the horror of the gas chambers and prison blocks.  There is a guided tour around the site lasting 2.5 hours then a second tour after a break of Auschwitz II – Birkenau lasting approximately an hour.

If you don’t mind being underground, then this fascinating tour involves visiting the Wieliczka Salt Mine which dates back to medieval times.  The route goes 135 metres underground, accessible by stairs or elevator by special request and is a unique place to visit.  People visiting often report health benefits too due to the special climate and micro-element filled air of the mine.

The story of Oscar Schindler is one of the most inspiring of World War II and this former enamel factory was where it took place.  Featured in the film Schindler’s List, the museum is a chance to see how this Nazi Party member helped over 1200 Jews escape the Holocaust.  It also looks at daily life in Nazi-occupied Krakow through the lives of its citizens.

The tour also includes a visit to Eagle Pharmacy on Heroes’ Square and the commemoration of the massacre of Jews there.  Finally, visit the Old Synagogue at the heart of the Jewish Quarter and see the various artefacts it contains.

See the royal history of Poland with this tour of Wawel Cathedral.  You can see the 12th century Gothic church and medieval castle walls which are now a national sanctuary.  The church has had a troubled past and has been destroyed and rebuilt several times, most recently in the 14th century.  You can also visit the Sigismund Bell Tower, one of the biggest church bell systems in the country that requires 12 bell ringers to ring one 30 ton bell alone.

Finally, visit the chapels and burial chambers of the Polish kings and then the John Paul II Cathedral Museum, commemorating the life of the former pope.

In addition to the two biggest cities, there are many other wonderful places to visit across Poland including cities such as Wroclaw, Lodz and Poznan.

If you are visiting Wroclaw, then this guided walking tour of the Old Town is an ideal way to see the best sights.  It includes the Market Square and the City Hall with its late gothic design.  You pass the university campus with its Baroque architecture from the Hapsburg period and then the Market Hall.  Finally, you visit the oldest part of the city, Ostrow Tumski where the Cathedral of St John the Baptist is located.

This visit to the Chochołowska Baths is a full access ticket that gives you access to all the facilities and treatments.  These include the thermal baths, salt baths, sulphuric baths as well as saunas and steam baths.  Also enjoy the trap door water slide, the outdoor pools and even sports areas.